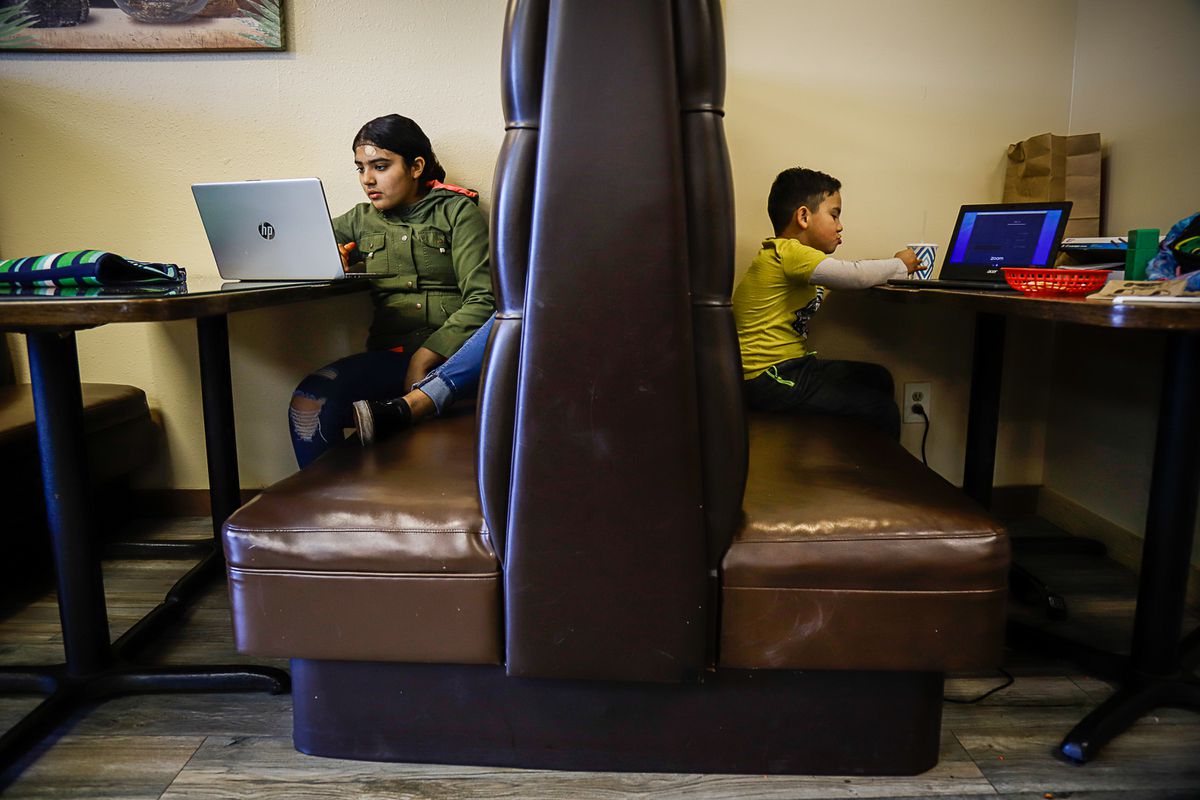 Kasandra Tafoya and her brother Manuel Isaac Tafoya work on assignments from their family’s restaurant Pedro’s Mexican Grill in mid-October 2020. (Photo by Jeff Chen / Alaska Public Media) ONE TIME USE

Kasandra Tafoya and her brother Manuel Isaac Tafoya work on assignments from their family’s restaurant Pedro’s Mexican Grill in mid-October 2020. (Photo by Jeff Chen / Alaska Public Media) ONE TIME USE

The school day started around 9 a.m. in a tidy mobile home in South Anchorage where Elisa Yepez Oregel lives with her husband and their four kids.

Vanessa, a fourth grader at Klatt Elementary, sat in front of a laptop at the kitchen table, as her teacher told her what assignments she still needed to do.

From the other end of the table came the sounds of a first-grade class. A teacher was guiding students through pronouncing letters, but 6-year-old Manuel Isaac sat back in his chair and didn’t say anything.

Next to him was sixth-grader Kasandra who helped her younger siblings, and also logged into her own class on another laptop.

“I am doing my missing assignments that I haven’t turned in,” she said.

Meanwhile their mom, Yepez Oregel, talked to her son in Spanish, telling him to pay attention to his class and not hit his sister. Her youngest daughter, 2-year-old Alyssa Valentina, toddled across the floor.

This is what weekday mornings have looked like for the past couple months at 36-year-old Yepez Oregel’s home. It goes on like this for a few hours. Then the kids pack up and they all head to the family’s restaurant, Pedro’s Mexican Grill. Yepez Oregel summed up the routine in just a few words.

Across the Anchorage School District, tens of thousands of students are attending school online, after the coronavirus pandemic shut down in-person instruction back in March.

That has left parents forced to combine the full-time job of caring for children with their existing work. Without additional resources to hire babysitters or tutors, some parents, including Yepez Oregel, say it’s an impossible task. And, for her, it’s all the more difficult because English is her second language.

About 17% of the Anchorage School District’s roughly 42,000 students are considered English language learners.

“I think everybody’s struggling,” Garbe said. “But specifically, if you don’t have the language skills to participate, it’s difficult.”

She’s usually at the family’s restaurant until about 2 a.m. each day, and then making breakfast for her kids by about 8 a.m., before online class begins.

She said she’s most afraid of her kids falling behind in school, especially Manuel Isaac who has a speech delay and is in occupational therapy for his motor skills. He often refuses to participate in online lessons, she said, and it’s hard for her to help him because she doesn’t always know what the teacher is saying.

“Sometimes I understand,” she said. “It’s hard for me to explain (to) my son.”

As the school district weighs the contentious issue of when to bring kids back into classrooms in the middle of a pandemic, Superintendent Deena Bishop has said she’s concerned about achievement gaps growing as online school continues. Resources in students' homes, where they’re now spending their school days, are not equal, she said.

“The gap is just widening between the haves and the have nots,” she said.

In the afternoon, Yepez Oregel and her four kids go over to Pedro’s Mexican Grill where her husband has been working since the morning.

The three school-aged kids bring their school-issued laptops and finish their work in the restaurant’s booths. Then they usually watch YouTube videos.

“Being back in school would be better,” said Kasandra, the sixth grader.

It’s not just school that’s straining the family, but also the business.

Yepez Oregel moved to Anchorage from Mexico about seven years ago, and her husband came to Alaska as a teenager. They opened Pedro’s Mexican Grill in 2019, she said, describing it as a long-time dream.

The restaurant is tucked in a small strip mall in East Anchorage between a nail salon and a church. At first, Yepez Oregel said, business was good. But then came the pandemic and restrictions on restaurants.

Even when they could serve customers, when restrictions were lifted, one day they made just $7, she said. They thought about shutting down. They let go of their only two employees.

Then an effort to buy meals from local businesses to feed health care workers helped keep them open.

These days, Yepez Oregel said, she and her husband take all of the orders at the restaurant, and do all of the cooking and the cleaning themselves.

Yepez Oregel said she’s exhausted and worried all the time. She said she knows it’s hard for her kids to focus at the restaurant with the music and customers and phones ringing. But, she said, there’s no extra money for child care.

While she worries about the coronavirus, and it infecting her family, she said she’s still looking forward to her son going back into the classroom next month, under the school district’s plan, and she hopes he hasn’t fallen too far behind.