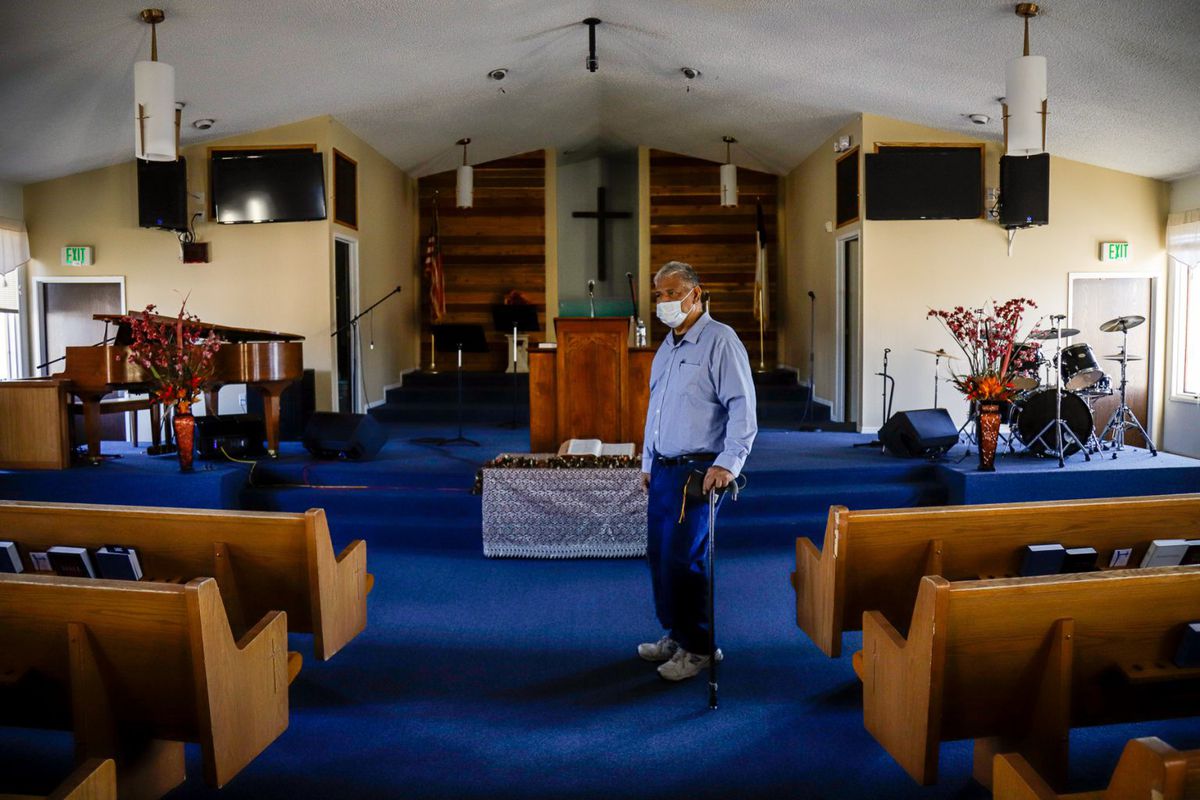 William Tauanuu or “Pastor Willie” as he’s better known in the Pacific Islander community, at the University Baptist Church on Friday, Oct. 30, 2020. Tauanuu spent 44 days in the hospital, three weeks of which he spent on a ventilator in a coma with COVID-19. He says his faith and hope got him through the experience, but he hopes that the Islander community will tighten up COVID-19 precautions like masking and distancing. (Jeff Chen/Alaska Publlc Media)

William Tauanuu or “Pastor Willie” as he’s better known in the Pacific Islander community, at the University Baptist Church on Friday, Oct. 30, 2020. Tauanuu spent 44 days in the hospital, three weeks of which he spent on a ventilator in a coma with COVID-19. He says his faith and hope got him through the experience, but he hopes that the Islander community will tighten up COVID-19 precautions like masking and distancing. (Jeff Chen/Alaska Publlc Media)

In Alaska, Native Hawaiians and Pacific Islanders are being hit harder by the pandemic than any other group.

There are about 10,000 people in the state who identify as Pacific Islander or Native Hawaiian, most of whom reside in Anchorage. They are nearly 30 times more likely to be hospitalized and 12 times more likely to die from COVID-19 as Alaska’s white population, according to state data.

William Tauanuu, known by many as “Pastor Willie,” has experienced it first hand. He started to hear about high rates in the community in midsummer, particularly after a well-attended wedding that left dozens infected, he said.

Tauanuu continued to preach to his congregation at University Baptist Church until mid-September, when he started feeling short of breath. He got tested for COVID-19 and shortly after he got back a positive result. Soon, his symptoms sent him to the hospital. The doctors told him he had double pneumonia and would need to stay the night. At first, he refused.

“I got up, started walking out the door. I almost made it to the door, my breathing got heavier. And I couldn’t walk, I fell on my knees,” he said.

The doctors forced him into a bed, but things kept getting worse. They discussed inducing a coma so they could put him on a ventilator.

“I called my wife and I, and I sort of said — just in case — ‘this might be the last time’ kind of speech. I told her how much I love her,” he said.

Next thing he remembered, he was waking up to a crowd of doctors and nurses looking over his face.

He’d been in a coma for three weeks. Two of his brothers also ended up in the hospital on ventilators, as did many friends. One friend died.

Tauanuu said faith brought him through his illness, along with the compassion and expertise of his doctors, but he also said he could have taken more precautions. He had relied on faith to avoid getting COVID.

“We don’t use faith in a situation of COVID-19, because God also has given us a mind to reason to make good choices. You make choices for your family safety every day: you lock your doors, you lock your windows at night,” he said.

Stopping the traditions of gathering and making physical contact is a big adaptation for the tight-knit Polynesian community, where church services and gatherings for weddings and funerals are at the center of social life. Hugs are a standard greeting. But, increasingly, community members are seeing first hand how these things can be dangerous.

A large outbreak at a funeral early on in the pandemic led to dozens of COVID-19 infections. Over the summer, subsistence dipnetting on the Kasilof and Kenai also became a significant vector, according to community leaders.

She said the community has high rates of heart disease, diabetes and obesity, all of which make outcomes of COVID-19 worse. Studies show that diabetes alone doubles a patient’s risk of death.

Community leaders have teamed up with the state and city health departments for informational meetings and to produce videos translated into Samoan and Tongan with public health messages. Flyers were printed and posted at community hubs like Kava’s Pancake House and the Red Apple Market. But many long-held traditions are hard to change.

“People have been going to church since they were little, and continuing to gather in the ways since birth,” said Mao Tosi, a community advocate in Anchorage. “To stop doing what’s been normal is just trying to break a habit.”

He’s convinced his mother to stop attending services, though it’s an ongoing argument. For many others, church isn’t something they’re willing to give up.

Pastor Moe Tali said that he’s continued to hold services but has made adaptations. Instead of hugs, it’s shakas. Food has been eliminated. He’s cut services at his Island Revival Church down from three hours to less than one.

He’s also pushed congregants to personalize their face coverings. He wears a black, Oakland Raiders cloth mask on his face, and said he’s seen others with tribal designs.

“I don’t like wearing a plain old mask, you know, or wearing somebody else’s mask, I’m gonna wear a mask that represents me,” he said.

He said he’s seen more masks being worn at gatherings, which is encouraging, but he said there’s still outreach and education work that needs to be done. He hears of groups getting together to drink kava at church and there’s plenty of people who think they’re too macho to wear masks.

There are also economic factors that make it hard to contain outbreaks. Many in the community live in crowded, multi-generational housing. Many also work in frontline occupations where they come into more contact with the public. Churches that rely on tithes at in-person services have taken risks to keep their doors open.

Tosi said educating minority churches and business owners about options available for loans and other small business relief would help them feel secure enough to close their doors if needed.

“If we do not show them how to go after certain funding the stimulus package or any of those things, then they’re going to continue to go to church…some of these gatherings are some of their income to pay the expenses for the rents and other things,” he said.

Seia said it’s also been difficult for state governments in places like Alaska to figure out where to direct resources. There aren’t health clinics or non-profits well-positioned to direct funding and outreach.

“There’s zilch,” said Seia, who recently visited Alaska for a funeral. “If you are looking to get that done for that funding by and for communities — black, Indigenous and brown communities — there’s no nonprofit to take it, the people are not getting CARES Act funding.”

But the groups have started to organize more effectively to work with the governments. And groups like the Pacific Islander COVID-19 Response Team have created networks across states. Seia’s mother, who lives in Whittier, was also seeking to start a local non-profit to help direct pandemic response funding.

Those sorts of efforts could be a silver lining for the tragedy that the pandemic experience has been for many Islanders in Alaska, but for now, advocates are hoping their efforts can help the community get through the cold winter safely.