Anchorage will return to a monthlong limited ‘hunker down’ in December 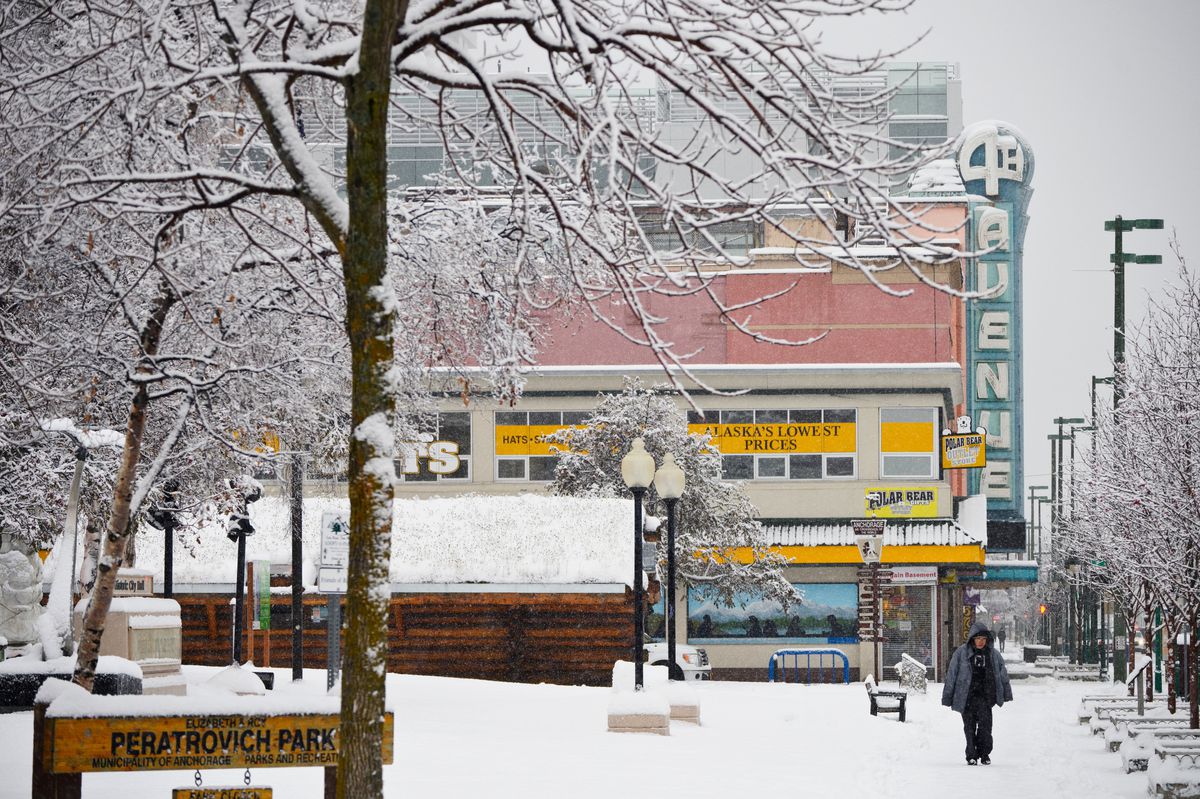 Anchorage Acting Mayor Austin Quinn-Davidson on Wednesday ordered the city to return to a modified “hunker-down” state through December, imposing the most widespread economic closure the city has seen since former Mayor Ethan Berkowitz’s initial shelter-in-place order was issued in March.

Starting at 8 a.m. Tuesday and extending until Jan. 1, bars and restaurants will end in-house services and be restricted to takeout, delivery and outdoor dining only. Retail and other public-facing businesses, including gyms and salons, will be limited to 25% of their capacity, and retail businesses must be able to keep people from different household groups at least 6 feet apart. Personal-care businesses can no longer provide services like beard trimmings or facials that require a person to temporarily remove a mask.

Quinn-Davidson said in a community briefing that since she took over as acting mayor in October, the Anchorage Health Department has warned that a hunker-down order could be needed to lower transmission rates. She said she has done everything she could to slow the virus while keeping businesses open, but the situation has gotten dire.

“Case counts have continued to break records, and our public health team lost its ability to keep up,” Quinn-Davidson said.

Dr. Megan Clancy, an infectious disease specialist who works at Alaska Regional Hospital and Providence Alaska Medical Center, said more patients are coming to the hospitals and they are coming sicker and staying longer.

“Please take the chance to save a life, to prevent one of your loved ones from getting sick,” Clancy said. “Please, please wear your masks. We’re begging you. We’re drowning and we need your help.”

Some voiced criticism of the new emergency order. Assemblywoman Jamie Allard, representing Eagle River/Chugiak, called it a “devastating turn of events.” Allard has been a frequent critic of the city’s response to the pandemic, including the mask mandate and business closures.

“The impacts will be undeniably hard for those who do not have the good fortune to work for government or work from home,” Allard said in an emailed statement.

The news was not received well by Alaska’s largest hospitality trade group. Sarah Oates, president and CEO of the Alaska Cabaret, Hotel, Restaurant and Retailers Association, said in an email that she was “devastated and furious” to find out about the new emergency order late Wednesday morning.

Oates said the industry is facing “irreparable devastation” and said that she provided Quinn-Davidson with several alternatives to a shutdown of the hospitality industry. Closing down bars and restaurants, where staff can sanitize surfaces, patrol distance between group and capacity levels, will only further push people to unregulated gatherings in private homes where masks aren’t worn, she said.

Owners of restaurants and bars reached by the Daily News on Wednesday said that they are frustrated by the shutdown and are concerned for the welfare of their employees, many of whom will now lose their jobs or have working hours cut, just before the holidays.

Quinn-Davidson said she understands that the hospitality industry has been heavily targeted by COVID-19 restrictions, since bars and restaurants are by nature where you gather indoors and don’t wear masks. To help mitigate the economic fallout, she called on the Anchorage Assembly to reallocate the final unspent $15 million in federal COVID-19 relief money to go to rent and mortgage relief and grants for small businesses and the hospitality industry.

She also said she plans to meet with Alaska’s three members of Congress to urge them to work to pass a new relief bill, which has stalled amid partisan gridlock.

“I am calling on our congressional delegation to put politics aside and pass another round of economic stimulus,” she said. “There is no legitimate reason that they have not done this.”

Under the new order, everyone in the municipality “shall limit outings and physical contact with those outside of their household.” Indoor gatherings will be limited to six people and outdoor gatherings limited to 10, with masks and social distancing required at all gatherings. Specific exceptions apply to drive-in events, political or religious gatherings and day cares.

People must work from home if possible and avoid physically entering indoor spaces outside their home as much as possible. Indoor sports competition against other teams is also banned, but practice is OK as long as players can remain 10 feet apart.

The closures are scheduled to remain in effect for one month, expiring on Jan. 1 without further action.

The business closure comes as the nation is experiencing its “third wave” of COVID-19, and heading into the holidays. Several states have tightened restrictions lately. More than half of the country now has a mask mandate, and close to half of states have some sort of travel restriction.

In Anchorage, cases of COVID-19 are hitting new highs weekly, and on Tuesday Alaska set a record with 13 new coronavirus deaths reported. With hospitals strained statewide, health care workers fear the worst is yet to come as cases swell since those who test positive may take weeks to get sick enough for hospitalization.

The city’s contact tracing resources have been stretched thin for weeks, limiting the ability to contain spread and slow transmission of the virus between people. Many who test positive aren’t even being contacted by health officials while they’re infectious, Anchorage Health Department director Heather Harris said.

Anchorage’s R0, which is the average number of people one person spreads COVID-19 to, is sitting at 1.15. An R0 over 1.0 means that case numbers are increasing. If the municipality can do enough to limit spread, Anchorage can drive that number down, avoiding the worst-case scenarios in its hospitals, said Dr. Tom Hennessy, an infectious disease epidemiologist with the University of Alaska Anchorage.

Multiple doctors participating in the briefing spoke to the serious situation in the city’s hospitals as well as their concern over rising case counts.

Last week, word of an impending shutdown of dine-in services rippled through the hospitality industry. Quinn-Davidson last Wednesday said she wasn’t immediately announcing new closures, but mandates would need to be imposed if cases don’t subside.

Quinn-Davidson on Wednesday said that last week, she talked with her team about issuing a new emergency order, but thought they could wait just a bit longer to see if numbers could taper down after pleading with the public to avoid gatherings and tightening up the mask mandate. But numbers did not decline.

“We just cannot wait, so we have to do it today,” she said.

Like elsewhere in the U.S., response to the pandemic has deeply divided Alaskans. Some bristle at government-imposed restrictions and argue they unfairly single out small businesses, in turn crushing the economy. Others are calling for more mandates to contain the virus, including a statewide mask order from the governor who has so far declined to issue such a mandate, instead deferring to local governments.

A series of surveys in October show that 87% of Anchorage residents who responded wear masks most or all of the time they’re outside of their homes, a group of researchers at the University of Alaska Anchorage wrote. And, 62% of the people who responded to the survey said they were in support of a modified hunker down order.

Former Mayor Berkowitz previously instituted a four-week “reset” in August during a smaller spike in cases that closed various establishments to indoor dining. The August orders saw a series of contentious legal battles between the city and select restaurants that chose to defy orders and serve food indoors.

The reset led to loud opposition, including a charged clash with protesters outside an Assembly meeting at midnight, which Quinn-Davidson witnessed. Quinn-Davidson said she focused on public health in making this decision, not the animosity it could spark.

“I did not consider that opposition,” she said. “My job in this role is to protect public health and to prevent unnecessary death, and that’s what I am doing by issuing this order.”