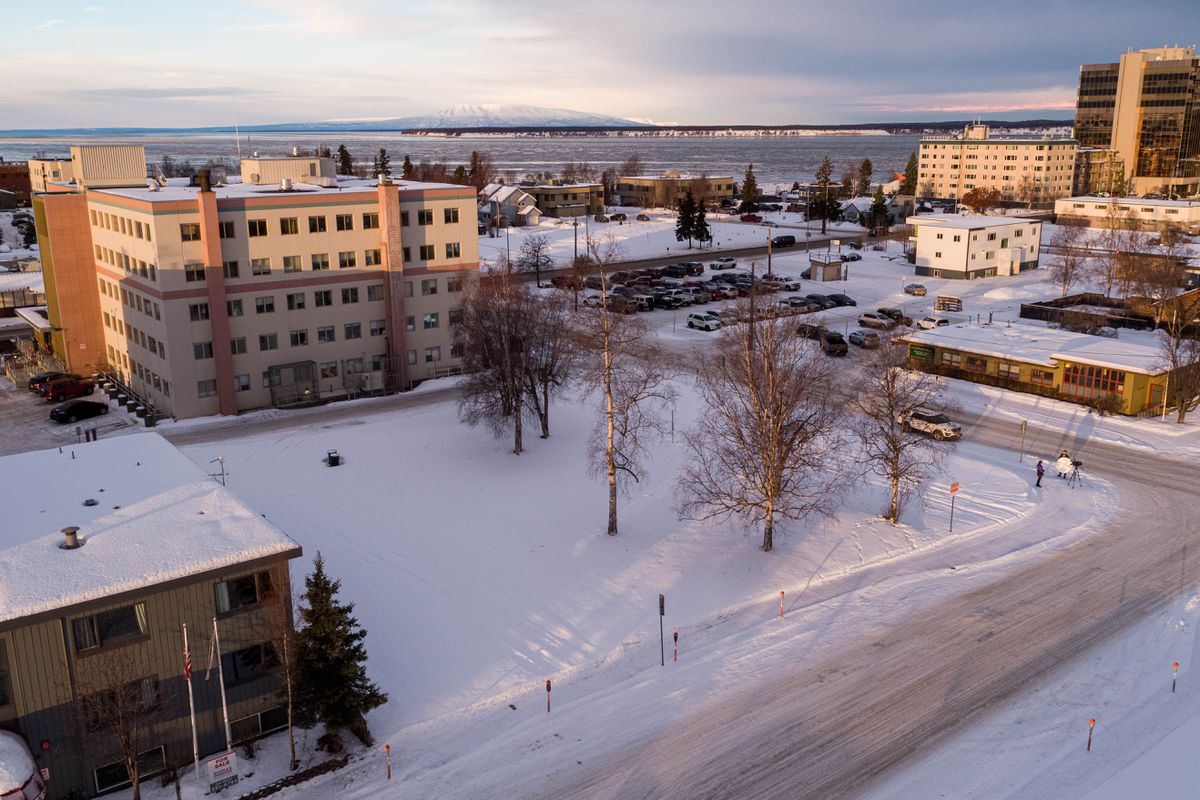 A vacant lot at the corner of K Street and 8th Avenue is the site of a proposed 44-unit apartment complex, photographed on Friday, Jan. 8, 2021 in downtown Anchorage. (Loren Holmes / ADN)

A vacant lot at the corner of K Street and 8th Avenue is the site of a proposed 44-unit apartment complex, photographed on Friday, Jan. 8, 2021 in downtown Anchorage. (Loren Holmes / ADN)

This spring, in what are now three empty lots at a corner in downtown Anchorage, a new 44-unit apartment complex will begin to sprout — the result of a $6.2 million project between the city and a local developer.

The Anchorage Community Development Authority, a municipal corporation, owns the three lots at K Street and West Eighth Avenue, which were once home to the K Street Eats food truck pod. The authority is partnering with local real estate developer and property management firm Debenham Properties to bring a large, market-rate housing complex to the area for the first time in decades.

The Block 96 Flats complex will feature studio and one-bedroom apartments that the developers estimate will rent between $1,100 and $1,500 a month. The apartments will be relatively small — about 400 to 600 square feet — which allows the developers to keep rents a little lower than other similar market-rate complexes, said Shaun Debenham, president of the firm.

The apartments, about one block from the Delaney Park Strip, will have amenities including vaulted ceilings, in-floor radiant heat, in-unit laundry, a heated parking garage, secure coded entry and a rooftop patio, according to a project announcement.

Andrew Halcro, director of the Anchorage Community Development Authority, said the current plan is for the project to break ground in May and be completed by summer 2022.

Halcro said he sees the development as an important step toward bolstering the vitality and the economic stability of downtown. It will help transform the area from primarily a business hub into a fully fledged neighborhood, he said.

“The fundamental problem of downtown Anchorage for decades is that unlike other urban cities, we do not have a downtown population,” Halcro said. “So it’s 5 o’clock when all the government offices and legal offices and places like ConocoPhillips shut down for the night. Everybody goes home.”

If more people lived downtown now, during the pandemic, the many mom-and-pop stores and restaurants dotting the district would not feel such a big economic impact because there would be customers living there, Halcro said. The lack of area residents has also deterred some big businesses like Walgreens from investing in the area, he said.

Until now, without heavy subsidies, it has been nearly impossible to build in the area because it’s so expensive, Halcro and Debenham said.

“We have kind of a death-by-1,000-cuts-type scenario for market-rate housing here in Anchorage Bowl right now,” Debenham said.

Often, the building ends up being worth less than the cost of constructing it. The public-private partnership between the city and the developer fills in the money gap that usually drives developers away from the area, Halcro said.

This type of partnership is a first for his firm, Debenham said. The city is investing about $1.8 million and providing the land for the project, for which the firm has a 50-year lease. The ground lease payments will help the authority recoup its money.

“But they’re able to provide those ground lease payments on terms that make the project more financially feasible, Debenham said, whose firm built Northwood in 2012, a market-rate complex in South Anchorage.

Other existing downtown complexes, such as Elizabeth Place on Seventh Avenue, were built with money that included federal funds and that comes with some “strings attached,” Halcro said. A large percentage of the apartments comes with income restrictions for residents and lower rents, he said.

With market-rate housing, there is no restriction as to who can rent an apartment.

It’s long been difficult to bring residential housing to the area, Halcro and Debenham said.

“The city was mired in a recession and then we had an earthquake and we had a pandemic,” Halcro said. But the city agency continued to seek ways to bring more residents to downtown.

“ACDA continued to negotiate on this property, much to the credit of the private developer. And they were very sold on downtown, so they didn’t even flinch when the pandemic hit,” Halcro said.

Debenham said his firm, which was founded and is based in Anchorage, has a vested interest in improving the city’s neighborhoods.

“That’s one of the things that we’re really excited about with this downtown project,” he said. “It is going to be a fantastic project that’s going to add to the built environment in that area, and just really provide a class-A asset down there.”