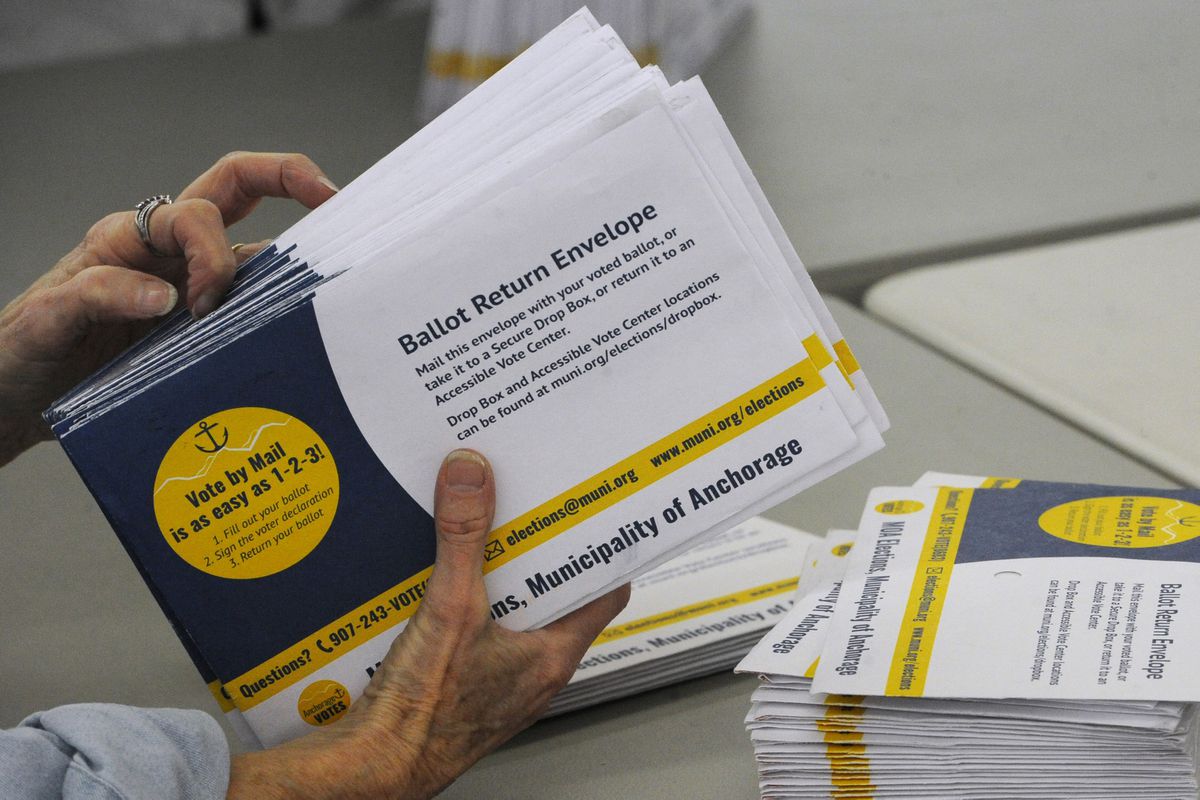 The Anchorage Assembly on Thursday approved an ordinance with a package of adjustments to the municipal code that governs city elections.

The measure, which passed 8-1, is the result of a yearly review of election code. Leading up to the vote, Assembly members grappled with questions of eroding public trust in elections systems. Nationwide, distrust among some voters hit a crescendo after the presidential election and the ensuing unsubstantiated claims of widespread voter fraud.

The municipal election is April 6, with voters electing a mayor and members of the School Board. The last day to register to vote is March 7 and ballots are mailed to voters on March 15.

Some parts of the ordinance seek to tighten protections against fraud and misconduct.

Anchorage’s elections review process is conducted by the municipal clerk, the city’s election commission, municipal attorney and assembly counsel and the Assembly’s Ethics and Election Committee, according to a memorandum to the Assembly from member Suzanne LaFrance.

Most of the changes the ordinance makes to elections code are insubstantial and help streamline the processes and update language. Some of the biggest changes, according to the memorandum, include:

• The updated code makes it explicit that the municipal clerk can “gather information” pertaining to alleged voter fraud or an election offense and then give that information to law enforcement when needed so a complete investigation can be conducted.

• Vote centers will be open for fewer days during runoff elections because of the shortened election period.

• Ballots mailed from overseas and postmarked by election day will have four days longer to be received.

• Voter misconduct offenses that are consistent with those in state statute have been added to code. This is so the city has “the authority to prosecute election offenses and maintain the accuracy and integrity of municipal elections,” according to the memorandum.

Assembly member Jamie Allard, who represents Eagle River and Chugiak, voted against the ordinance. Assembly member Forrest Dunbar, who is running for mayor in the upcoming election, recused himself from voting on the ordinance to avoid any perceived conflict of interest.

Assembly Chair Felix Rivera may face a vote to recall him from office on the ballot this spring; Vice Chair John Weddleton, after a brief review of ethics code, found that there would not be any conflict of interest and allowed Rivera to vote on the ordinance.

Concerns about the timing of making changes to municipal election code before the April election and concerns of public perception dominated the discussions preceding the ordinance’s passage.

Several people who testified during a period of public comment expressed distrust with Anchorage’s elections system. Others pointed to the troubling public perception of widespread voter fraud during the presidential election — although nonpartisan election officials found no evidence of widespread fraud — as a reason not to make changes now.

“This is not the time to be messing with the way people vote in this town. Things are really hard right now, across the entire country. People have doubts about when their vote counts,” said Kristen Bush, who called in to testify.

Still, there was a long public review process that led to the code changes, one that was lengthier than in previous years, said Weddleton.

“What we have here is really something that meets the goals that I think even people who criticized it have,” Weddleton said. “It makes our election better. The wording in here makes it harder to commit fraud.”

Joyce Anderson, chair of the Anchorage Election Commission, recommended that the Assembly pass the ordinance.

“The review process is extremely important and allows us in the clerk’s office to steadily improve election processes, including the security and accuracy of municipal elections for efficiency, and to guard against voter fraud,” Anderson said. “Working to improve internal administrative procedures along with revising and fine tuning information provided to voters and voter accessibility is paramount.”

Still, some questioned the concentration of power with the municipal clerk to investigate allegations of fraud. But Municipal Clerk Barbara Jones said that she, in large part, already gathers information regarding possible fraud.

Jones said that since about 2018, she includes every allegation that her office receives from the public or from sources like election workers and reports to the Assembly what she finds for each allegation.

The updates to the code clarify the clerk’s duty.

Crystal Kennedy, an Assembly member representing Eagle River and Chugiak, had proposed some amendments to the ordinance, including one that would have removed a provision that allows for an election official to waive the identification requirement if the official knows and recognizes the voter. The Assembly voted 5 in favor to 4 against on the amendment, but it did not pass because the Assembly needs at least six yes votes to pass a substantive amendment.

Kennedy then moved to postpone the entire elections matter until July, at the Assembly meeting after the results of the spring election, when the Assembly would have a full body present and be able to vote on changes to the ordinance.

But Jones said that in order to institute the new processes for the upcoming election, the Assembly needed to make the changes Thursday.

Kennedy eventually voted to pass the ordinance and said she would take up the changes she wants to implement into election code at a later time. Still, she said that it would have been better to postpone the vote until after the election to ease any public scrutiny.

“It will be enough to cause the public to be suspicious and I am concerned about that, because I don’t think right now we need any more fuel to that fire,” she said.

Correction: A previous version of this article incorrectly said how ballot envelopes are reviewed has been changed so that a voter ballot can still be counted if the voter is verified and qualified to vote, even when the voter or an election worker fails to sign the envelope. The change only applies to questioned ballots. The article has also been updated to reflect that the April 6 election does not include Assembly races.