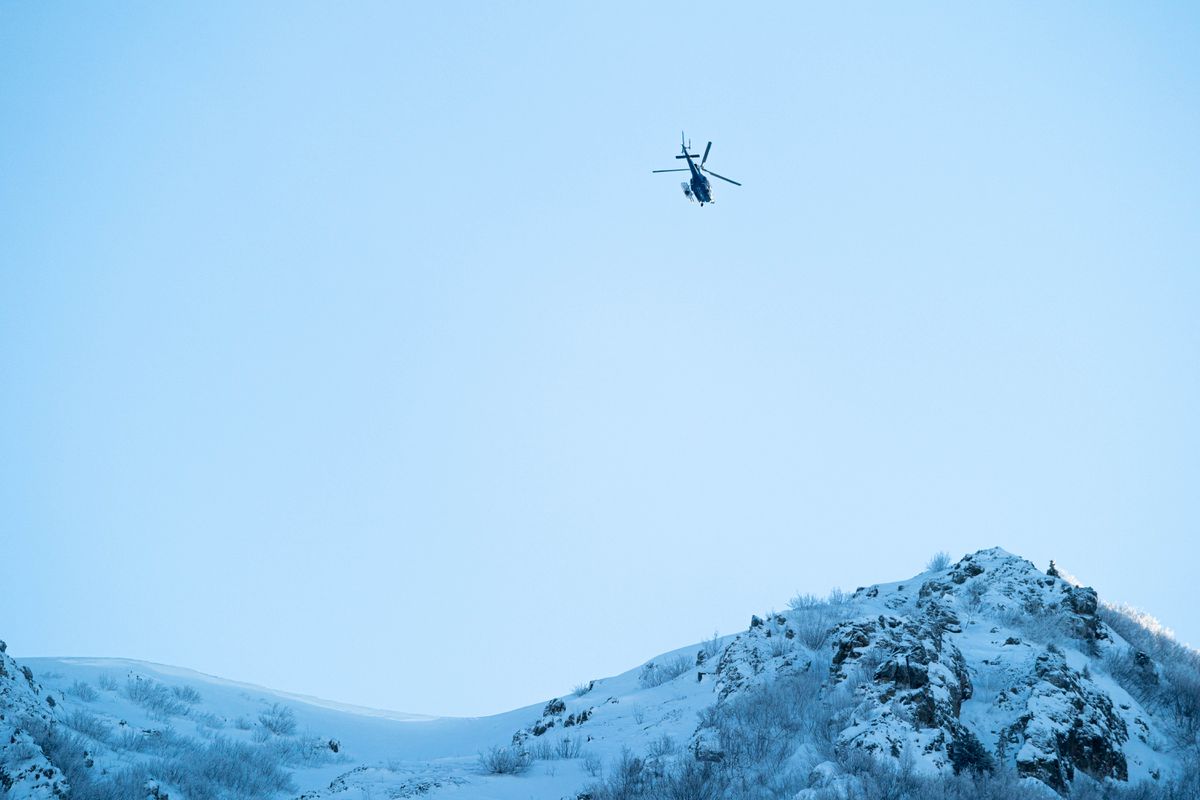 An Alaska State Troopers helicopter hovers over the Northwest Couloir of Bear Mountain on Thursday in Chugiak. AST, the Chugach National Forest Avalanche Information Center, and the Alaska Mountain Rescue Group are investigating the Tuesday avalanche that killed three hikers in the couloir. (Loren Holmes / ADN)

An Alaska State Troopers helicopter hovers over the Northwest Couloir of Bear Mountain on Thursday in Chugiak. AST, the Chugach National Forest Avalanche Information Center, and the Alaska Mountain Rescue Group are investigating the Tuesday avalanche that killed three hikers in the couloir. (Loren Holmes / ADN)

Three experienced climbers were on a steep and challenging route on Bear Mountain, near Chugiak, when they were killed in an avalanche this week, according to officials.

The three men — 54-year-old Thomas Devine of Chugiak, 43-year-old Matthew Nyman of Denver, Colorado, and 50-year-old Edward Watson of Miami, Florida — on Tuesday drove to the trailhead at Bear Mountain, located within Chugach State Park near Mirror Lake and Peters Creek. The last time anyone heard from the group was around 10:30 a.m. that day, Alaska State Troopers wrote in an online report.

The most common route up the mountain is a relatively popular, moderate hiking trail on its south side. The three men were in a different area on the northern face of Bear Mountain, troopers spokesman Austin McDaniel said Thursday.

The men were climbing in the Northwest Couloir area when an avalanche occurred, McDaniel said. The couloir is a technical route through a steep, narrow gully of ice and snow on the northwest face of Bear Mountain. It was not clear what time the avalanche occurred Tuesday or if the group was heading up or down the route at the time.

The climbers were due back at the trailhead around 5 p.m. Tuesday and were reported overdue to the Alaska Rescue Coordination Center, troopers said.

On Wednesday morning, troopers and the Alaska Mountain Rescue Group began to search the mountain for the group. Searchers saw a recent avalanche and found the men’s bodies buried in the slide, troopers said.

“There was fresh snow that accumulated overnight on top of the slide area when searchers from the Alaska Mountain Rescue Group reached the site on Wednesday morning,” McDaniel said by email.

Officials from the avalanche center, troopers, Chugach State Park and Alaska Mountain Rescue Group returned to the scene Thursday to investigate what may have triggered the avalanche. Details surrounding the slide and conditions at the time were not available by Thursday evening.

Devine was an experienced climber and mountaineer who had summited Denali, Rainier and Iztaccihuatl in Mexico, according to a story published in the Alaska Star in 2010. He was described in an online fundraiser as an “enthusiastically welcoming person” and father to three daughters.

“He fought to be healed from the loss of a leg and no use of his other foot, in addition to a traumatic brain injury, to be able to walk again, climb mountains and work for the government,” Crichton said over email Thursday. The couple met while Nyman was in graduate school and they married in September 2020.

Nyman was a dedicated father to his two sons in Colorado Springs and to his stepson, Crichton said. He most recently was the Cyber Fusion Center director for American Family Insurance, and was featured in a documentary released in 2012 that followed 11 veterans as they climbed the Himalayan Mount LoBuche. Nyman served in both Iraq and Afghanistan.

McDaniel said Thursday that officials were not aware of any other recent avalanche activity on Bear Mountain. Troopers on Wednesday warned people to avoid the area because of continued avalanche risk.

“Avalanches are common along the Chugach Mountains and we encourage anyone recreating near mountains during the winter to always tell someone where you are going, when you will be returning, check avalanche and weather conditions before departure, and to carry an avalanche beacon with your emergency gear,” McDaniel said.

Over the past few years, troopers have performed several search and rescue missions in the area in summer and fall months, McDaniel said, but in each of those cases, people were able to self-rescue.

This is the first time in many years that so many lives were lost at once in an avalanche, said Wendy Wagner, director of the Chugach National Forest Avalanche Information Center. The loss is tragic to the entire community, she said.

“It’s really heartbreaking,” Wagner said. “These things are so tragic and for the people that are left behind, especially when there are a lot of unanswered questions — it’s just so difficult, and it’s difficult for our community. I hope that any information we can provide as an avalanche center, or community because it’s a joint effort, can help bring some closure for them.”