Alaskans snap up COVID-19 vaccine appointments on first day of new eligibility, in Anchorage and statewide 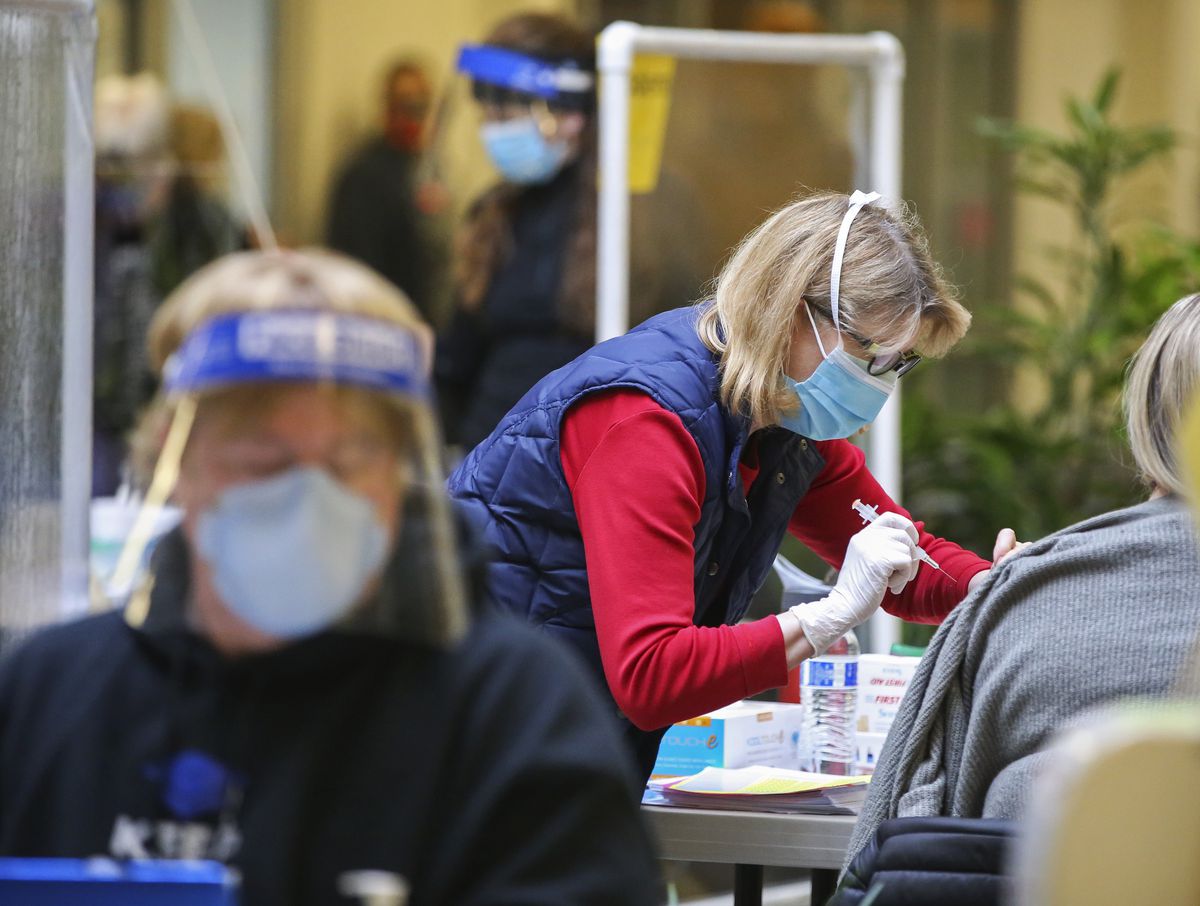 Elizabeth O'Malley, a nurse practitioner who is volunteering at a vaccine clinic at the Anchorage School District Education Center, administers a Moderna COVID-19 vaccine on Thursday. (Emily Mesner / ADN)

Elizabeth O'Malley, a nurse practitioner who is volunteering at a vaccine clinic at the Anchorage School District Education Center, administers a Moderna COVID-19 vaccine on Thursday. (Emily Mesner / ADN)

The Anchorage School District vaccine clinic buzzed with activity on Thursday afternoon as hundreds of people showed up for a shot of the COVID-19 vaccine.

A day after the state announced it was dramatically broadening vaccine eligibility, people clamored to book vaccine appointments across Alaska: Thousands of slots opened and filled throughout the day.

“The appointments are going quickly, as we anticipated,” said Tessa Walker Linderman, a co-lead with Alaska’s vaccine taskforce, on Thursday afternoon.

Beginning Thursday, the vaccine became available to a large crop of Alaskans, including educators, people 50 and older with a high-risk medical condition, front-line essential workers 50 and older and people living or working in congregate settings like shelters and prisons.

Anne Webb, 59, practiced signing up for an appointment Wednesday night. Determined to get the vaccine, she tried after midnight and once again the next morning, but had no luck.

Then suddenly, 200 appointments popped up online and she nabbed one, she said while walking to the waiting area at the Anchorage School District clinic.

The district opened up 200 more appointments late Thursday morning after the early hours of the clinic were kind of quiet, ASD spokeswoman Lisa Miller said. The new slots filled rapidly.

[Here’s who is eligible for the COVID-19 vaccine in Alaska, and how to sign up for a shot]

People awaiting their doses filed into the clinic in the afternoon, going through a registration process before receiving the jab and then sitting in an observation area and signing up for their second shots. The clinic is set to run through Saturday and 2,100 appointments have been made, Miller said.

Walker Linderman said that vaccine providers were asked to release as many appointments as they could Thursday, and more appointments would become available over the next few weeks.

“We are asking people to check back if you are eligible, as appointments are being added on a pretty regular basis,” she said. As of Thursday evening, hundreds of appointments were still available in Anchorage and other slots were open at least in Sitka and Valdez.

Walker Linderman acknowledged that there wasn’t enough vaccine available in Alaska for all those newly eligible.

Heidi Hedberg, a director with the state Division of Public Health, said her team estimated the new group included at least 70,000 Alaskans — far more than the total amount of vaccine currently available in the state.

The reason the state decided to open up the new tier sooner than expected is that they had noticed appointments for seniors were not filling up as quickly as expected, and with more supply of vaccine arriving soon, “we just felt that it was time to move on,” Walker Linderman said.

It wasn’t a hasty decision, she said.

The team had heard from many communities that “had gone door-to-door and called everyone in the phone book, and just could not find any more seniors to get vaccinated,” she said.

Opening up a new tier gave flexibility to communities that were ready to move on, she said. And opening up eligibility to more Alaskans didn’t mean seniors would get left behind — they would still have access to vaccine if they wanted it.

Many Alaskans who were newly eligible were excited for the chance to sign up.

Anna Olivo, 58, was also getting vaccinated at the ASD clinic on Thursday.

She said she didn’t even feel the shot. While she sat waiting after the jab, Olivo said she knew there was a possibility that she could still get sick but she was hopeful the vaccine meant there wouldn’t be lasting impacts from the illness.

Also, Olivo travels a lot. She usually leaves the country on her birthday in September, something that the pandemic had a big impact on.

”I always travel somewhere, Spain, Italy — Argentina was next — so it’s the traveling that has hurt me, but on the positive side, I’m gardening like a crazy person,” Olivo said. “You have to bend with the wind.”

Leslie Clark, director of community services at the district, was helping check people into a post-vaccine waiting area at the clinic.

Clark recounted the hopeful stories she’d heard from people recently able to receive the vaccine. One person, teary-eyed, told Clark that she was receiving the shot the same day her father had passed away years before.

“It was her opportunity to extend her life,” Clark said. “So it’s just been really endearing. People are really grateful that they have this opportunity.”