State widens COVID-19 vaccine eligibility, bumping up all teachers and others including at-risk Alaskans over 50 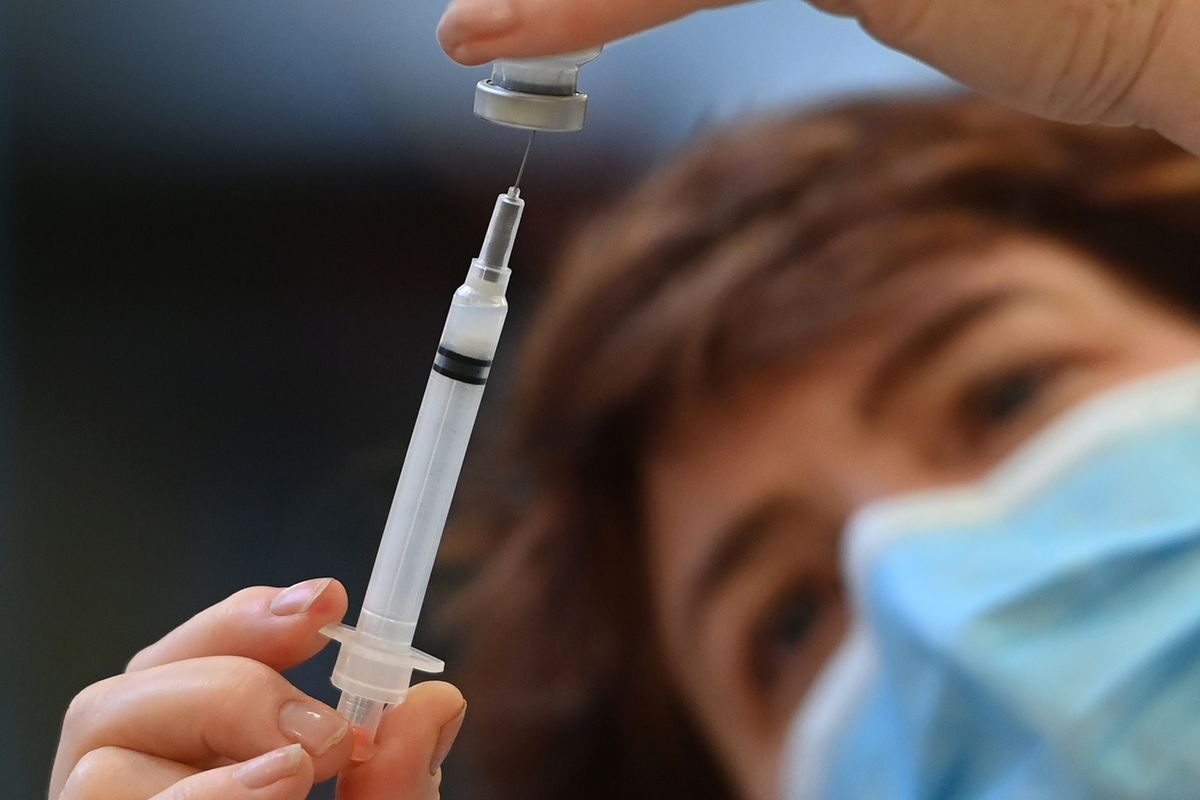 Teachers and child care staff of all ages will become eligible for the vaccine beginning Thursday, according to a statement from the Alaska Department of Health and Social Services.

Also eligible: Alaskans 50 and older with at least one high-risk medical condition; certain front-line essential workers 50 and older who work near others; people living or working in shelters, prisons, and other congregate settings; and ‘pandemic response staff’ who may come into contact with the coronavirus through their work.

The state had originally included only teachers above 50 in this next eligible group, but expanded that to all teachers and other staff. Educators had asked for broader vaccinations as schools around the state reopened to in-person learning starting last month.

Alaskans with a high-risk health condition hadn’t originally been included in the next tier, but have now been bumped up, too.

Appointments for this new group will open up on Thursday. Those eligible can visit covidvax.alaska.gov or call 907-646-3322 to sign up and to confirm eligibility. Officials say they’re using an honor system and that the state’s vaccine priority system was designed to protect vulnerable people first.

In Anchorage, newly eligible residents will be able to sign up via the state site for a vaccine clinic offered by the Anchorage School District for appointments Feb. 11 – 13, according to a statement from the district.

And in Juneau, a clinic will be held February 11-12 at Centennial Hall. Those appointments can be made online at juneau.org/vaccine or by calling 907-586-6000 to make an appointment.

The state’s decision to expand eligibility was made after appointments for seniors filled more slowly than expected, leaving vaccine available, according to Dr. Anne Zink, Alaska’s chief medical officer.

Still, there isn’t enough vaccine available now to give shots to everyone who’s eligible, Zink said.

“While we know this next group is large, and there will be more demand than supply at first, this gives communities more flexibility to move quickly. The demand will be met over time as more vaccine becomes available,” she said.

Despite the additional number of Alaskans now eligible to seek a vaccine shot, Alaska Gov. Mike Dunleavy said during a video briefing Wednesday that the decision doesn’t mean those ages 65 and older will get “crowded out.”

“I just want the seniors to understand — and folks that know seniors or take care of seniors — if you want a vaccination, we will move you to the front of the list,” Dunleavy said.

About 52% of the state’s seniors have so far been vaccinated against COVID-19, health officials said.

Health officials also announced that Alaska would get an additional allocation of doses through a federal pharmacy program. Walmart will initially begin receiving those doses, and appointments are expected to be available on the state’s site Thursday, according to Tessa Walker Linderman, the state co-lead on Alaska’s vaccine task force.

The statewide union representing more than 12,000 public school employees praised the state’s decision to include not only teachers but other support staff and educators as schools around the state resume in-person learning at school instead of home.

Six schools in Mat-Su, where schools opened for in-person learning in August, temporarily shifted to online-only for some or all of this week due to numerous COVID-19 outbreaks.

In Anchorage, where some students and staff began returning to buildings in January, five classrooms at four Anchorage elementary schools have shifted to online learning until later in the week, according to the district’s online dashboard.

Vaccinating educators should help protect their families, as well as students and their families, from getting or spreading the virus, said Tom Klaameyer, NEA-Alaska president.

“This is a huge relief,” Klaameyer said, of broad vaccine eligibility for educators. “It’s one more layer of protection to help keep schools safe for everyone.”

Kim Rion, a stroke survivor with chronic obstructive pulmonary disease, turns 60 this year and is part of the newly eligible group of people over 50 with underlying conditions.

For that, Rion is grateful.

“I’m a shut in. I don’t leave my house unless I have a doctor’s appointment,” she said Wednesday. “I’m uber cautious about it. Because if I get it, I’m dead.”

But Rion, an Anchorage resident who serves on the board of the Disability Law Center, also believes the state should have already opened eligibility to anyone with underlying health risks regardless of age, especially front-line workers.

“Say there’s someone with epilepsy or diabetes that may be a grocery store worker. But they’re 25, 35, 45,” she said. “They should have been the front of the third wave.”

Alaskans who are 65 and older, along with health care workers and long-term care residents and staff, are already eligible for vaccine. State officials initially expected it would take the month of February to vaccinate all seniors interested in getting shots.

But they also said early on that it was a complicated timeline to predict since many older Alaskans were eligible for separate vaccine allocations through the Indian Health Service and Veterans Affairs — and some had already been vaccinated in long-term care facilities.

They also didn’t know exactly how many of Alaska’s roughly 90,000 seniors would want to get vaccinated.

When appointments first opened up to seniors in January, those slots filled within hours of opening up. But the second-round sign-ups in February did not fill as quickly, and Alaska health officials have said they aren’t quite sure why.

A recent report from the Anchorage Health Department showed that just a third of local residents 65 and older had been vaccinated by early this week. And by Wednesday afternoon, Alaska’s COVID-19 vaccine website showed nearly 1,200 COVID-19 vaccine appointments still available statewide during the month of February.

That site only shows availability from the roughly half of providers that use a state-run scheduling software called PrepMod, which means the number of open appointments is likely even higher.

Scott Watts is a pharmacist at Ron’s Apothecary Shoppe in Juneau, a small drug store and pharmacy in business since 1978 that recently started distributing COVID-19 vaccine to eligible customers. Watts says that all 100 doses of vaccine the store received in February have already been used up.

“My general feeling based on demand is that we easily could have used 200 to 300 or more,” he said. “A lot of our customers would like to come here to get vaccinated rather than a large, mass vaccine clinic.”

He said interest in getting vaccinated has been high, particularly among those 65 and older. Those customers were the reason the shop decided to become a vaccine distributor in the first place, he said.

No vaccine has been wasted, Watts said. The store keeps a list of customers they call on if there is any vaccine left over at the end of the day that needs to be used quickly.

Dan Nelson is the pharmacy director with the Tanana Chiefs Conference in Fairbanks, a health consortium that serves 42 tribes in interior Alaska and has so far received more than 10,000 doses of COVID-19 vaccine from the state and the Indian Health Service since December.

“There’s more of a lag than we expected,” Nelson said, explaining that there were about 5,000 doses left as of early this week.

With so much vaccine, the consortium was recently able to extend eligibility to any tribal beneficiaries 16 and older, he said. By early this week, more than a quarter of eligible beneficiaries had received at least one dose of vaccine.

Nelson said he’s not concerned any vaccine will get wasted — it’s stored in ultra-cold freezers — but the consortium is considering sharing supplies and expanding eligibility further to make sure it gets in arms as quickly as possible.

Walker Linderman said she wanted Alaskans to know that despite the large number of open number of appointments, no vaccine was or would be wasted.

Vaccine gets ordered on a daily basis based on appointments made, and then is then subtracted from the state’s total monthly allocation, she explained. Not all of the vaccine the state is allocated each month arrives in a single shipment.

“I think there’s a perception that we’re getting one big shipment of vaccine and then we’re in this race to quickly use it before it goes bad, and that is not the case,” she said.

By Wednesday, 114,117 — nearly 16% of Alaska’s total population — had received at least their first vaccine shot, according to the state’s vaccine monitoring dashboard. At least 48,153 people had received both doses.

Alaska has currently vaccinated more residents per capita than any other state, according to a national tracker.

• Pandemic response staff who may come into contact with the coronavirus during outbreak response activities.

This is a developing story. Check back later for updates.