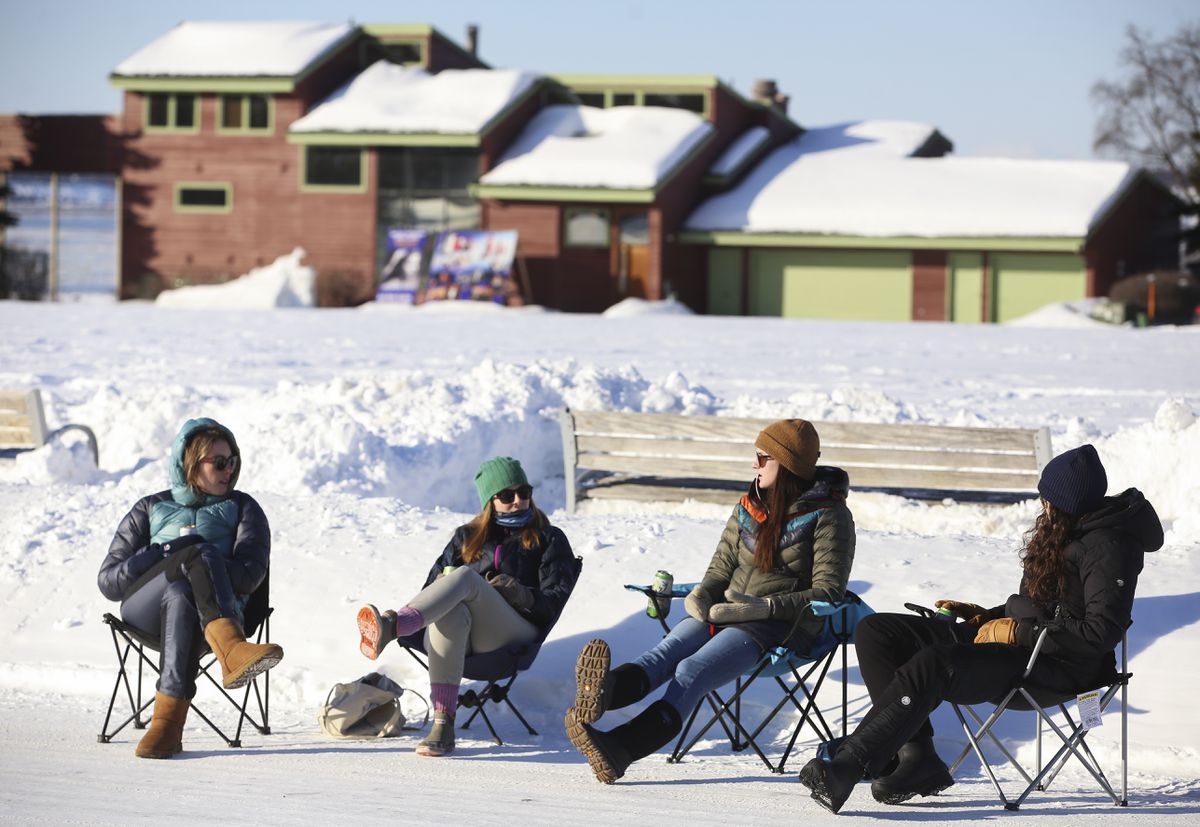 From left, Hanna Chastain, Sarah Fischer, Brooke Shortridge and Brooke Marston sit in the sun outside next to the Park Strip in downtown Anchorage and talk on Saturday, March 13, 2021. (Emily Mesner / ADN)

From left, Hanna Chastain, Sarah Fischer, Brooke Shortridge and Brooke Marston sit in the sun outside next to the Park Strip in downtown Anchorage and talk on Saturday, March 13, 2021. (Emily Mesner / ADN)

The Municipality of Anchorage will lift outdoor gathering restrictions in a new COVID-19 emergency order that takes effect later this week.

Also, the new emergency order will remain in effect either until it is revoked or until the city’s health department certifies that 70% of eligible Anchorage residents are fully vaccinated, according to the order. Right now, about 36% of Anchorage residents 16 and older are fully vaccinated, according to the order — which means that number would need to double in order for the restrictions to become advisories under the new order.

The order, called “Do It For Summer,” emphasizes vaccinations, masking and social distancing as avenues toward a more normal summer season for residents and tourists.

“All of us want to be on the other side of this,” said Acting Mayor Austin Quinn-Davidson during a Monday community briefing. The 70% vaccination target “provides an end goal,” she explained.

“It tells residents where we need to go, and helps us track our progress,” she said.

The order also comes at a moment when Anchorage’s rate of daily new cases remains high following a sharp increase over the last six weeks, according to Dr. Janet Johnston, epidemiologist with the city’s health department.

“The way to bring case counts down, avoid the negative consequences of COVID variants, and beat the pandemic, is through vaccination,” she said during the Monday briefing.

Emergency Order 20 replaces the current order, EO-19, and goes into effect at 11:59 p.m. on Friday. The order keeps much of the same indoor gathering, masking and social distancing requirements currently in effect.

• Outdoor gatherings no longer have limits. That means outdoor graduation ceremonies, outdoor sporting events have no limit on the number of attendees. Masks and social distancing requirements remain in place.

• For indoor gatherings, much is the same in this emergency order, with one exception: Large ballrooms or conference spaces can hold seated events with up to four times the current indoor gathering limits, as long as there is 6 feet of distance between tables.

• Organized indoor sports will be able to have more spectators. Four spectators per athlete will be allowed instead of the current two. (Outdoor competitions have no spectator limit other than social distancing.)

• The city is setting a vaccination goal of 70% among its eligible residents. Once that is reached, EO-20 will no longer be compulsory.

Businesses such as restaurants, bars, theaters and others that serve the public in person are required to keep six feet of physical distance between groups of customers.

Dr. Thomas Hennessy, a University of Alaska Anchorage epidemiologist who also spoke during the Monday briefing, said recent public surveys involving Anchorage residents indicate the public’s willingness to get vaccinated, with close to 70% of participants indicating they either had been vaccinated or were willing to do so.

Johnston added that she thinks Anchorage has the capacity to reach its goal soon.

“We have a lot of vaccine available,” she said, explaining that the department’s goal is now to increase access to vaccines, and combat misinformation surrounding them.

With outdoor gathering restrictions lifted, Anchorage’s high school seniors will likely be able to bring more family members to their graduation ceremonies -- they were previously capped at two.

Anchorage School Board President Elisa Vakalis said that the board had received several emails and phone calls regarding the requirement that students could only bring along two people to graduation ceremonies.

Parents had asked how their children were supposed to choose between grandparents, aunts, uncles parents and stepparents when it came down to deciding who they’d bring to graduation, Vakalis said.

“There was a lot of frustration and concern,” she said.

But with those restrictions now lifted, more family members will be able to attend the ceremonies, Alan Brown, a spokesman for the district said in an email Monday afternoon.

Brown said numbers will vary by stadium where the ceremonies are set to be held and families will still need to wear masks and stay a safe distance away from others.

“This change will go a long way in giving our seniors and families the kind of graduation ceremony they deserve,” Brown wrote.