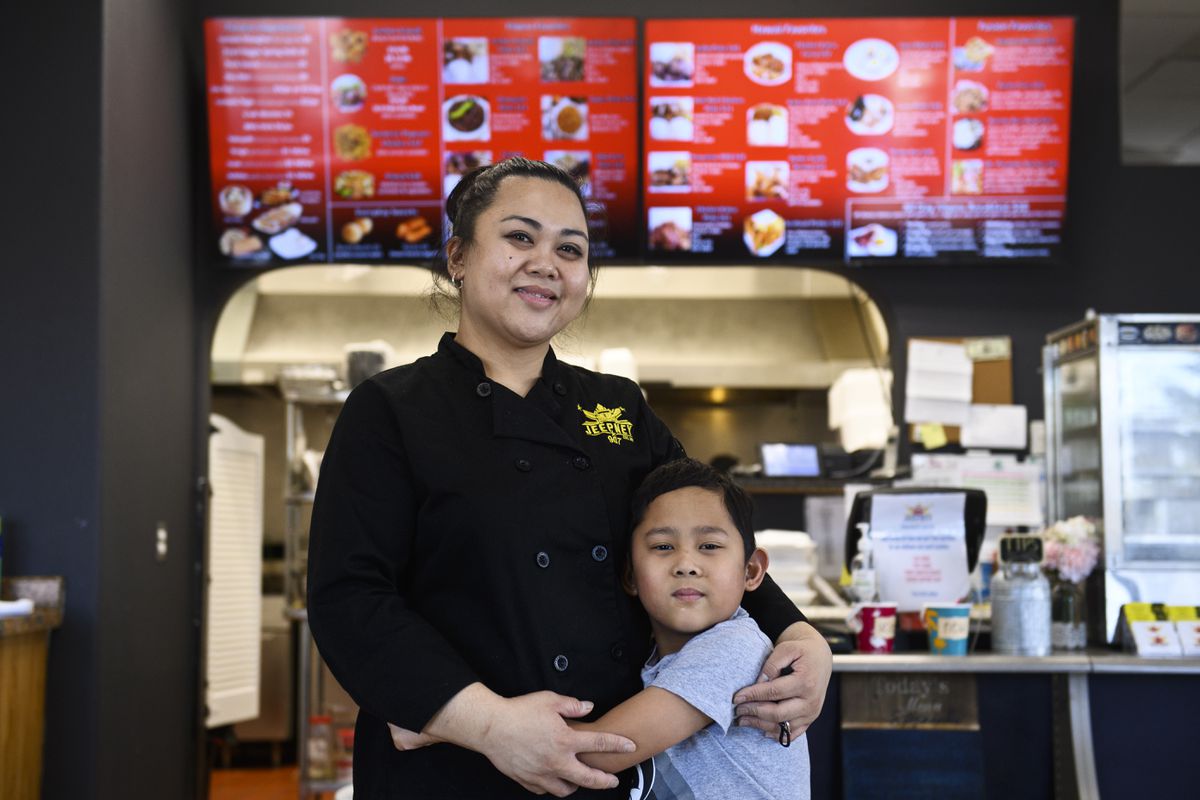 Before the pandemic, Jeepney Filipino Hawaiian Fusion Food served its sweet and spicy dishes out of food trucks.

But the shutdown of public events for the last year eliminated the venues where the food trucks found their customers.

So in June, the family-owned operation opened its first dine-in location in Anchorage, in a strip mall at 9191 Old Seward Highway.

In February, they opened a second brick-and-mortar location at the commissary at Joint Base Elmendorf-Richardson.

Next month, Jeepney plans to open a third Anchorage restaurant, in the former home of Alleyway Grille at the corner of Arctic Boulevard and Fireweed Lane.

“It’s been a blessing we have been able to open three brick-and-mortar restaurants in a time like this,” said co-owner Donna Manalo.

Manalo said Jeepney’s original goal was introducing more Alaskans to Filipino food. The business started with just her and her husband, Jerry Manalo, originally from the Philippines. They now employ about 25 people, she said.

This summer, Jeepney also plans to continue operating its food trucks as much as possible, she said.

“We want to employ at least 15 more people,” she said.

Cafecito Bonito: This coffee shop with a Latin American twist opened in mid-April in the Russian Jack Plaza near the Hacienda Mexican Restaurant.

In addition to commonly found drinks like slow-brewed coffees and mochas, Cafecito Bonito serves horchata lattes, based on the traditional sweet rice milk drinks popular in Mexico. You can also find Spanish lattes, espressos that include condensed milk. There’s also the cafecito, a traditional Cuban coffee.

Estrella Rodriguez-Northcutt, who runs the shop single-handedly at 6307 DeBarr Road, also makes fresh scones and pastries daily, and sells other baked goods. The foods include vegan, keto-friendly and gluten-free options as well.

Cafecito Bonito replaces the Leroy’s Coffee shop that opened in the same spot, shortly before the pandemic began in March 2020.

Rodriguez-Northcutt said she had helped Leroy’s open that location and its Midtown location at 701 W. 36th Ave.

Starting a new shop in the middle of the pandemic was difficult for the small-batch coffee roaster, Rodriguez-Northcutt said. So she made an offer to buy Leroy’s out, and it was accepted.

The business, at 549 W. International Airport Rd., Suite B8, near Guido’s Pizza, gives clients dozens of immersive experiences after they strap on virtual reality headsets, she said.

Concern over the pandemic also canceled many corporate gatherings and other event-based opportunities, Berkey said. The lack of school field trips has been especially tough because Berkey had hoped to bring in students for educational activities such as virtual chemistry labs, animal dissections and physics experiments, she said.

“It’s been a struggle, but everyone who comes in loves it,” Berkey said.

The center is open Thursday and Friday, from 3 p.m. to 9 p.m. It’s open Saturday and Sunday from noon to 9 p.m. The center hopes to expand its schedule in the future.

BodyPhlo/Sportique: The activewear boutique in the Metro Mall in Midtown closed on April 18, after a decade in business.

The store provided apparel for dancers, swimmers, runners, skiers and others.

In the current climate, with entrepreneurs more cautious amid the uncertainty caused by the pandemic, there were no buyers for the business, manager Rhiannon Roseman said.

“It’s rough, but it is what it is,” Roseman said. “It’s tough knowing what this store means to the community and how hard we worked to gain our momentum.”

Saint Coyote closed in March, August and December, amid pandemic-related restrictions on restaurants, said Jesse Gallo, an owner and manager.

Business is the best its been since the pandemic began, by far, Gallo said.

“I think people are just tired of being locked up,” Gallo said.

Pangea Restaurant and Lounge: Pangea reopened in late March. It closed shortly after the pandemic began in March. Serving dishes from around the world, some with vegan and vegetarian twists, it’s located at 508 W. 6th Ave.

Fletcher said he originally wanted to create an orchard on the property with apple and cherry trees. But with the pandemic still a problem, he decided to build the outdoor area and garden where groups of people can gather safely.

The outdoor space at 148 W. 91st Ave. will be among the largest of its kind in Anchorage, he said. The project will be complete around late May. Parking has already been added.

A new one-story building will support the rooftop deck, provide barrel storage on site and provide a kitchen prep area for Familia, the wood-fired diner inside the brewery. The diner is owned by Fletcher’s sister, Heather Cuedek and her partner, Jorge Garcia.

The building rooftop will also support a beer fermenting area. The brewery will capture yeast from the air in a structure known as a coolship, using an ancient brewing process.