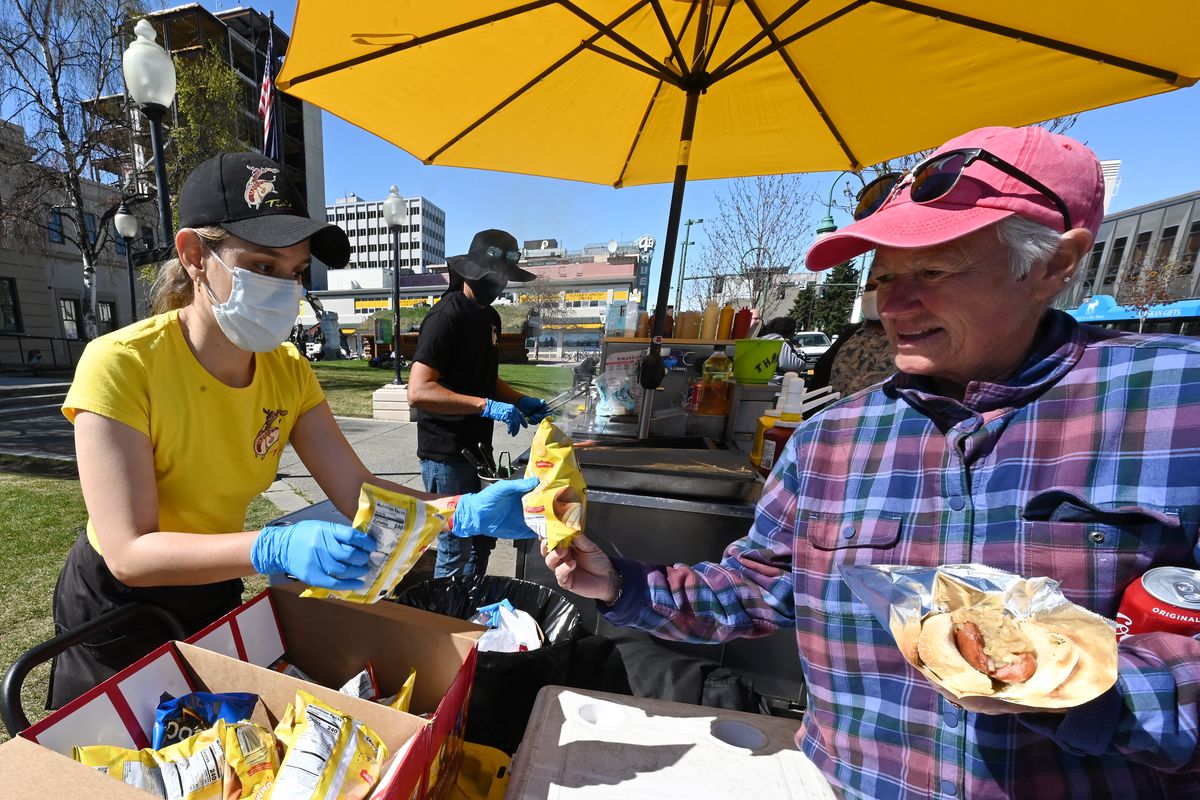 Manu Ramirez with Tia's Gourmet Hot Dogs & Alaska Reindeer Sausage along Fourth Avenue with customer Cheri Kerr of Moses Lake, Washington, on Monday, May 17, 2021. While cooking hot dogs David Vargas, center, said they continue to wear masks and gloves at the stand to be more sanitary for their customers. (Bill Roth / ADN)

Manu Ramirez with Tia's Gourmet Hot Dogs & Alaska Reindeer Sausage along Fourth Avenue with customer Cheri Kerr of Moses Lake, Washington, on Monday, May 17, 2021. While cooking hot dogs David Vargas, center, said they continue to wear masks and gloves at the stand to be more sanitary for their customers. (Bill Roth / ADN)

The rollback of Anchorage’s mask mandate and evolving guidelines from national health officials have left a hodgepodge of mask rules at Anchorage businesses.

Throughout the country, retailers are grappling with how to react to the announcement last week from the U.S. Centers for Disease Control and Prevention that fully vaccinated people can largely stop wearing masks indoors.

The Anchorage Assembly lifted the mandate here Friday, although city officials are still encouraging unvaccinated people to wear a mask.

At Northern Lights Barbershop in Midtown Anchorage, manager Hayley Jenkins said the choice is now up to the customer. She’s listened to customers grumble about the citywide mask requirement since it was implemented last June, which she said made it much easier to decide how to handle policies at the shop now.

Most of the employees at Northern Lights Barbershop are fully vaccinated by now and Jenkins said they felt comfortable making the changes to accommodate their customers. She said employees are no longer required to wear a mask but check in with the client first to make sure they’re comfortable with that.

Jenkins said there’s been a mix of mask-wearing among customers and the transition has felt strange for many of the store employees.

“I personally have been like ‘Am I making a weird face? People can see my face now again — do I look weird? Am I forgetting to smile?’ It totally is weird,” she said.

At the Dimond Center, general manager Bob Dye said the mall itself is still requiring masks, but retailers will be able to make their own choices about how they want to handle mask policies within their storefronts for customers and employees.

Dye said he doesn’t anticipate many of the businesses will immediately change the policies.

“I bet that most of the stores in town that you go into are going to require masks,” he said by phone Monday. “It’s how vigorously they’re going to enforce that is probably the key.”

Dye said that more enforcement was needed at the center early on in the pandemic, but as masks became the norm it was rare to see a bare face.

“It sort of became the new reality and eventually it became where you were somewhat of a pariah when you’re at the mall without a mask,” he said. Other shoppers or store employees would sometimes call mall management to complain about people without masks, Dye said.

Security officers at the mall carry extra masks to provide to those in need, but Dye said for the most part the center will “rely on people to do the right thing.”

For customers, the variance of where masks are and aren’t required can be confusing. While Marina Davis loaded groceries into the trunk of her SUV on Sunday, she said that she’ll likely continue wearing a mask until stores policies are more uniform.

Dennis contracted COVID-19 in March and spent two days in the hospital. She said she understands firsthand how dangerous the virus can be. Even after recovering from the illness, she said it’s sometimes still difficult to breathe and she experiences chest pains.

Although her experience with COVID-19 was brutal, Dennis said she feels more comfortable now without wearing a mask because so many people have been vaccinated and it is rare that she could be infected again after having the illness earlier. She said she’s not opposed to wearing a mask but finds it uncomfortable.