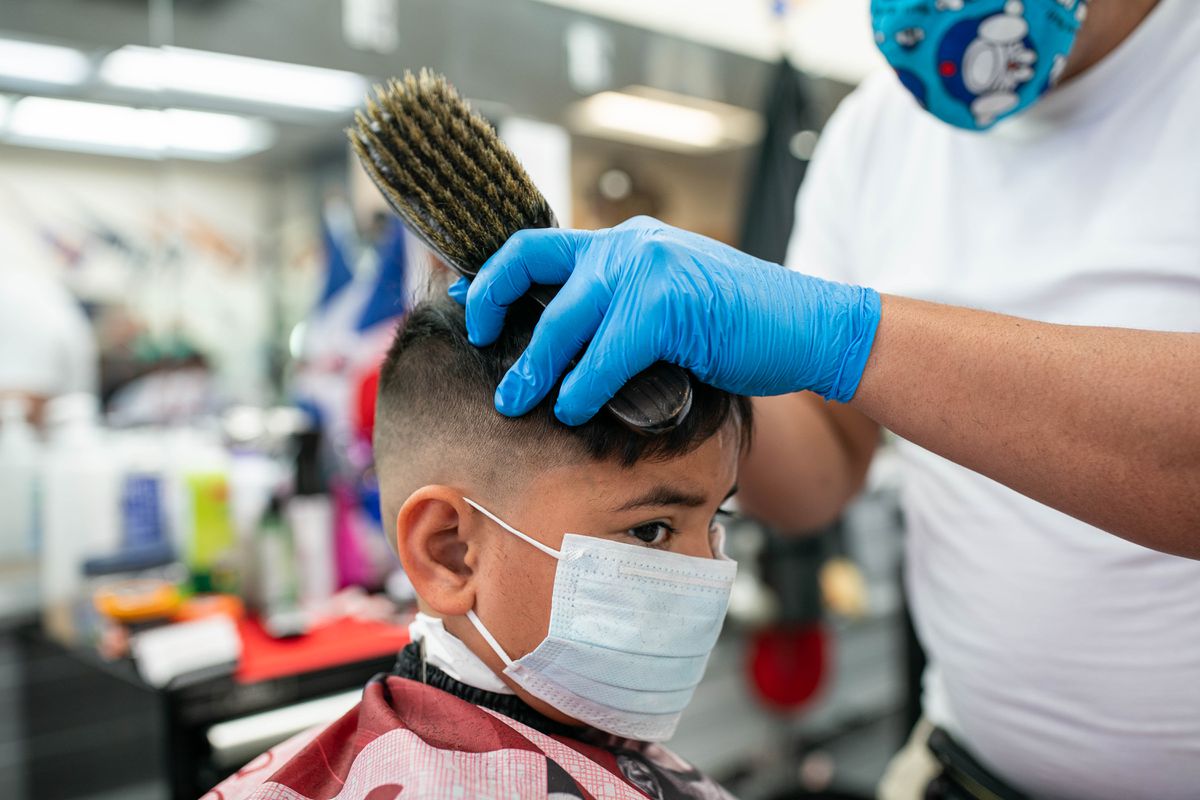 The order applies to public spaces indoors such as restaurants, grocery stores, salons and public transportation.

Berkowitz said the mask order was a response to an all-time high in active cases of COVID-19 in the Lower 48, as well as a spike in cases in Anchorage and Alaska.

Anchorage is not the first place in Alaska to mandate wearing masks in public. Dillingham has a mask requirement in place for any building open to the public. Nationally, a number of cities have issued similar edicts, and a number of states have required masks in certain situations. On Tuesday, Washington Gov. Jay Inslee issued a statewide order requiring facial coverings in public.

Some businesses in Anchorage — including Costco — have required customers to wear masks, though most have left it optional. Public health authorities in Alaska, as well as Gov. Mike Dunleavy, have encouraged people to wear masks in public settings.

The virus is spread through respiratory droplets, said Bruce Chandler, medical officer at the Anchorage Health Department. If someone is speaking with another person nearby, one individual might inhale the droplets or get them in their eyes and become infected with the virus, he said. The face coverings act as a physical barrier against those droplets going from one person to another, he said.

The federal Centers for Disease Control and Prevention recommends wearing a face covering because research shows people can transmit the illness without showing symptoms of the virus.

Anchorage saw a significant increase in cases last week, said Anchorage Health Department Director Natasha Pineda. There were 58 more cases of the virus between June 18 and the 24, she said, including 51 residents, two visitors and five seafood workers.

The city had 154 active cases of the illness on Friday, and was monitoring 470 cases and contacts who were being monitored by the Anchorage Health Department, she said.

On Friday, the Anchorage Health Department issued an alert about the sudden increase in cases, noting that the 152 active cases “are an all-time high,” which is eight times more than the number of active cases a month ago.

Chandler said cases continue to show up around the city and he expressed concern over the upcoming holiday weekend.

“I worry we may have a long, dark, stormy summer,” he said.

People with health issues that make it difficult to wear a mask are exempt, the mayor said. The order lists out many exemptions, including children under 2, children under 12 who are unsupervised by an adult, anyone who is speech-impaired or deaf and anyone whose physical or mental disability makes them unable to wear a face covering.

The order applies to non-public-facing buildings, such as offices, where people from different households congregate. That includes elevators.

Berkowitz described the order during a live video briefing on Friday.

The order does not extend to outdoor events, but will be imposed on indoor spaces where large groups congregate, Berkowitz said. He said if you are going to someone’s house who is not in your bubble, it’s advised to wear a mask.

“In a lot of ways, it’s going to be common sense application of what have been suggestions in the past,” he said.

Berkowitz said he wrestled with the decision to impose the order, but he was faced with three choices: do nothing, require masks or reimpose the hunker down order, shuttering businesses.

Berkowitz said the economic consequences of a hunker down order are “profound.”

“I want to make sure that the public is aware the mask order is something that is a burden on all of us. But you measure of potential harm of allowing COVID to spread in our community against the inconvenience of masking up.”

Berkowitz said there are peer-reviewed studies recently that show masks limit the spread of COVID.

Chandler said he believes there are more cases of the virus in Anchorage than the testing bears out.

Cases were discovered among staff and patrons at a bar, and in employees at a car dealership and a tourism company, Chandler said, as well as two flight attendants who were infected while flying to Anchorage.

Chandler called bars a “perfect environment to spread virus,” as people are close together. The other two businesses associated with COVID-19 cases last week demonstrated how easily the virus can spread among workers in a single office, he said.

In large part, people are cooperating with public health workers who are handling the investigation and monitoring cases, Chandler said, but that “there are a few wayward souls that absolutely refuse to have anything to do with us.”

It’s possible those people are still infectious, and could spread the virus to others, he said. Public health workers are trained to keep contacting people repeatedly, but some won’t answer their phones.

“Both here at the health department and at the state, public health workers are working night and day on COVID. It takes an incredible amount of work to do all the testing and to manage and monitor the patients and their contacts,” Chandler said. “We’re struggling to keep up.”

The municipality’s metrics for assessing the virus’s impact remained classified as “yellow” on Friday, meaning caution.

Of those indicators, Pineda said the city is closest to reaching its public health capacity, and would go from yellow to red if they cannot contact new cases within 24 hours to conduct a case investigation. If that indicator turned red, it would mean a need for more capacity but wouldn’t mean they would recommend the mayor close down businesses, Pineda said.

However, Pineda said if cases start impacting “the ability of the hospital system to manage the capacity, that will be an area where we would really take pause and be encouraging the mayor to think about bigger measures.”

While many people with COVID-19 won’t need to be hospitalized, Pineda said, some will. And when the virus is spreading among young, healthy people, it can also spread to people who are vulnerable to the illness.

“We know that hospital usage is going to go up in the near future because of the number of cases that we have in the community,” Pineda said.

She said she hoped that wouldn’t occur, but based on what has happened in the Lower 48, she said the city had to expect the increase in hospitalizations.

Berkowitz argued that the mask requirement is a business-friendly order. He said businesses have reported that customers don’t want to comply with business requirements to wear a mask because it’s not a city requirement. He said he wants to take that pressure off businesses.

“Now, it is the law,” Berkowitz said.

Berkowitz said it will not be on businesses to enforce the mandate.

Berkowitz acknowledged enforcement of a mask mandate would be difficult, but he said most of the rules a society has are difficult to enforce. But he said he’s hopeful people will do the right thing.

“I am not naive enough to think there is going to be universal compliance,” Berkowitz said.

Berkowitz said the city will enforce compliance of the policy when it hears of egregious violations of the order. If it’s at a business, code enforcement will go out and alert the business to the policy.

Berkowitz said the city has “tens of thousands” of masks, and is working on a plan to distribute them. A city document detailing purchases made under the COVID-19 emergency proclamation shows the city ordered 30,000 disposable masks, along with 500 cloth masks for city employees.

Mask wearing and mask mandates have become increasingly political, as some see it as a government overreach. As the conversation about a mandate in Anchorage picked up over the last week, some have questioned the authority the mayor has to implement such a requirement.

On Tuesday, a group of about two dozen people gathered outside of the Anchorage Assembly chambers to protest a resolution before the Assembly on mandating masks. Berkowitz has said such a policy is constitutional, and he isn’t aware of mandates anywhere in the nation being challenged in the courts.

“I’m just astounded by the number of constitutional scholars and epidemiologists that exist in our community,” Berkowitz said, with a short laugh. The Alaska Constitution also speaks to responsibility, he said, and there is a responsibility to keep others safe.

While there are mask skeptics, Berkowitz said there is increasing information showing masks help stop the spread of the virus.

“We have seen that in the Lower 48, that communities that have masked up have had actually declining rates of COVID, as opposed to those who have not masked up,” he said. “They are seeing increasing rates of the pandemic.”

Berkowitz said he understands philosophical opposition to wearing a mask.

The hope, Berkowitz said, is that with masking up, “We can avoid a lot of the calamity that’s occurring in places like Texas and Florida right now. If we do the right thing, we are not going to be in the same predicament those places are in.”

Berkowitz said he doesn’t know the probability of COVID-19 spreading widely in Anchorage due to a lack of policies like a mask order. But, he does have a grasp of how catastrophic an unchecked virus could be.

“If it were to spread widely, it would be highly impactful,” he said. “It would have significant health consequences. It would have huge economic consequences, and I think that would set us back a long way.”