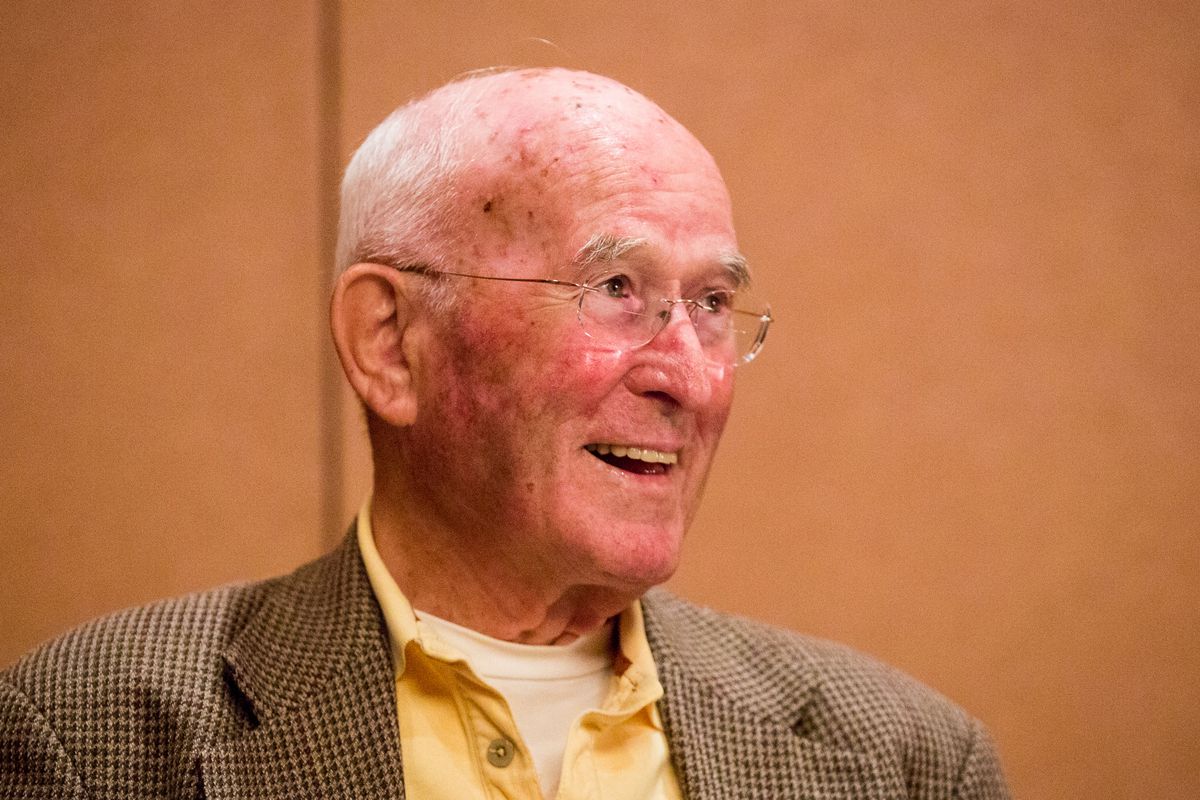 Tom Fink, who was the mayor of Anchorage from the late 1980s to the early ‘90s and also served as Alaska House speaker, has died at age 92.

Fink died Friday night of “complications from old age” after he was admitted to an Anchorage hospital last week, his son Josh said Saturday.

Fink had 17 grandchildren and nine great-grandchildren, in addition to 11 children of his own.

“I think he served his state honorably. ... For a long time, he was on the board at Holy Rosary (Academy), a strong believer in education and was very engaged with us — all the way up to the very end,” his son said.

Fink was born Aug. 26, 1928, in Peoria, Illinois, and grew up on a farm where he milked the cows every day before school, according to a 1997 Daily News article. He came to Alaska in 1952 after graduating from Bradley University and getting his law degree from the University of Illinois Law School.

He was elected to the Alaska House of Representatives and served from 1967 to 1975. He became speaker of the House in 1973.

Fink was also the Republican nominee for Alaska governor in 1982 but lost the election to Bill Sheffield.

“He was a fiscal conservative,” Knowles said Saturday. “When people talk about the Republican Party, the Grand Old Party, that’s who you think of ... you think of people like Tom Fink.”

Knowles said Fink was a “formidable political leader” who was “genuine, honest and hardworking.”

“It was never personal — which was really unusual — at a time when we have the hate agenda that is so prevalent in politics today,” Knowles said.

Fink served two terms as mayor and was followed by Rick Mystrom, who was elected in 1994. Fink ran and lost against Mystrom in 1997.

When first elected, Mystrom said, Fink was “just the right guy at the right time.”

After Fink and Mystrom’s mayoral terms, the two grew to know each other well, Mystrom said.

They played golf together. For a couple of summers, it was a weekly occurrence.

“It was just fun being around Tom like that,” Mystrom said. “He had a good sense of humor. He liked to laugh, and he was very self-deprecating about himself. He could laugh at himself — and that’s a great characteristic — to be able to laugh at yourself.”

A 1997 article about Fink during his campaign against Mystrom described his years as mayor.

“In 1987, with the city in the midst of a real estate market collapse,” the article said, “... voters chose Fink to be their mayor. In his six and half years on the job, he reaffirmed his public image as a stubborn man who always speaks his mind — in blunt, simple language — even when he shouldn’t.

“His administration never had a public scandal, and there is no evidence he was enriched by his public service. He worked hard and built a loyal staff.”

While mayor, he battled repeatedly with the Anchorage Assembly.

“No mayor wielded the veto pen more than Fink,” the 1997 article said. “By his own count, Fink issued 160 vetoes, an average of one almost every two weeks. The Assembly overrode him 85 times.”

Among his vetoes — overridden by the Assembly — was a gay-rights ordinance in 1993.

Heather Flynn, who was on the Anchorage Assembly while Fink was mayor, called him the “veto king.”

“Maybe that was his conservative bent, and maybe it was stubbornness, I don’t know,” Flynn said Saturday. “I think his veto pen was a reflection of what he felt was appropriate or right. If six, seven, eight, nine, 10, 11 members of the Assembly agreed with him — well, that’s OK — he kept on keeping on and kept vetoing.”

“He was consistent, I’ll give him that,” Flynn said.

Craig Campbell, who is part of Mayor-elect Dave Bronson’s transition team, is a former Assembly member who worked with Fink for several years.

He said Fink came into the job when Anchorage was in a deep recession and called him a “visionary” for his belief in privatizing public utilities.

“He was the first one to introduce privatizing the Anchorage telephone utility, which is today ACS,” Campbell said Saturday. “It didn’t happen during his term, but he’s the first one to bring that forward … and I think we’re seeing today that he was right.”

In a social media post Saturday, Mayor-elect Bronson wrote, “Tom was a true public servant who always worked to make Anchorage a better place for all.”

Gov. Mike Dunleavy also said in a statement that U.S. and Alaska flags will fly at half-staff in honor of Fink on a date to be determined by his family.

“There is no question that Tom lived a full life and left a lasting impact on those he knew and faithfully served,” Dunleavy said.

Fink’s son said there will be a funeral Friday, June 11, at Holy Family Cathedral, with details to follow.

“We’re going to miss him a lot,” Josh Fink said.

From We Alaskans magazine, 1988: A flock of Finks