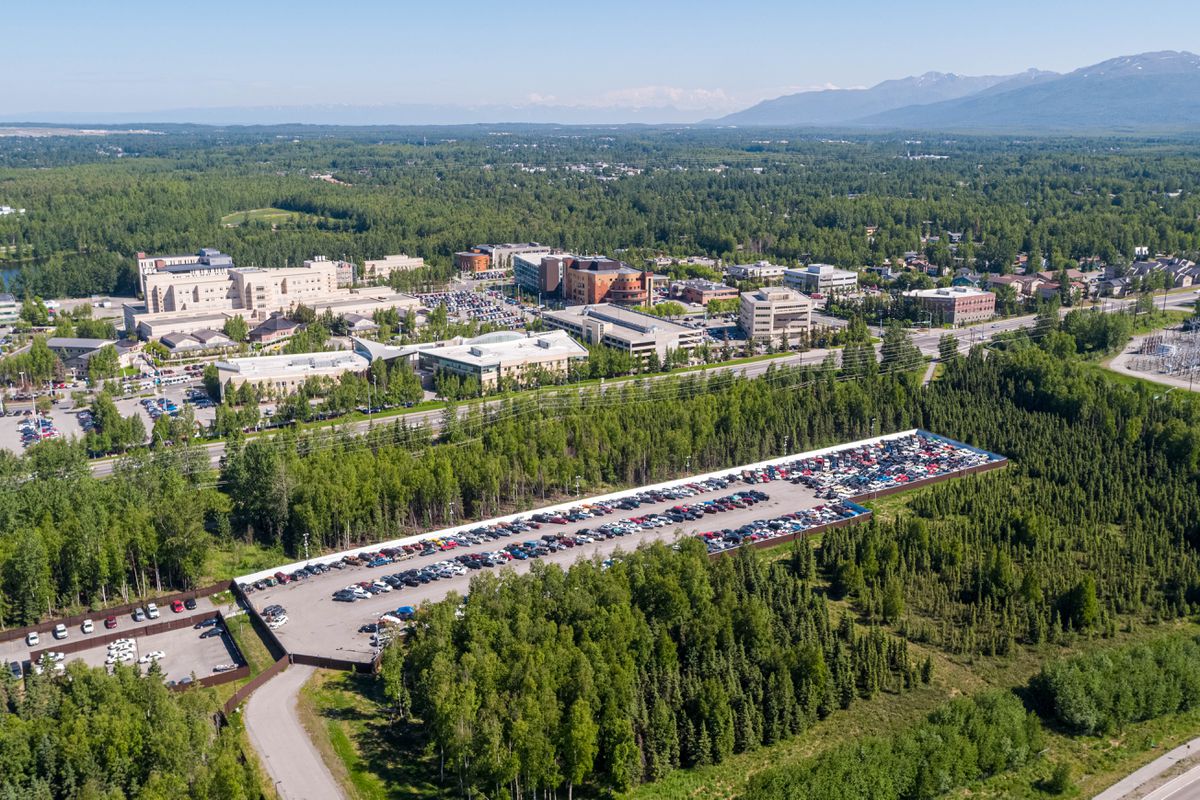 A current police impound lot, seen on Tuesday, June 15, 2021 in Anchorage, is a proposed site for a low-barrier homeless shelter that would serve as a navigation center, connecting people to resources and such as jobs programs, healthcare, permanent housing options and other services. The facility is has a planned capacity of about 450 but could be expanded up to around 1000. (Loren Holmes / ADN)

A current police impound lot, seen on Tuesday, June 15, 2021 in Anchorage, is a proposed site for a low-barrier homeless shelter that would serve as a navigation center, connecting people to resources and such as jobs programs, healthcare, permanent housing options and other services. The facility is has a planned capacity of about 450 but could be expanded up to around 1000. (Loren Holmes / ADN)

Anchorage Mayor Dave Bronson is asking the Anchorage Assembly to authorize $15 million to begin construction this summer of a large-scale homeless shelter and navigation center in East Anchorage.

The request, among several documents sent by the Bronson administration to Assembly members, lays out additional details of the proposed plan, including line-item money requests and estimated costs.

Bronson’s proposal, submitted to the Assembly on Friday, estimates the project would take 104 days if started on July 13, with an Oct. 25 completion date. But due to the required public process outlined in city code, the Assembly will not hold a public hearing and vote on the item until its July 27 meeting, pushing the completion date well into November under Bronson’s timeline.

Meanwhile, some Assembly members have sent a counterproposal, calling on Bronson to wait for more time to plan and construct his proposed navigation center, and suggested continuing to use Sullivan Arena as a shelter through the winter.

According to Bronson’s proposal, the center would accommodate pets and couples, offer storage for belongings, laundry facilities and individual shower and bathroom facilities.

It would also offer a host of other resources, including alcohol detoxification, medical opiate maintenance, and medical services such as podiatry, primary care and preventive medicine.

The structure, a temporary facility, would house up to 450 people experiencing homelessness. It could accommodate up to 5,000 people as an emergency shelter during a catastrophic event, according to Bronson’s proposal.

Made of a “stressed membrane structure,” the facility would be split into two connected buildings, each about 345 feet by 120 feet, and split into multiple subdivisions, the proposal says.

Bronson’s proposal asks to use $11.2 million from the city’s general fund balance, money that the Assembly had approved last summer to use for buying properties for homeless and treatment services, and which originally came from federal CARES Act funds.

During his campaign, Bronson criticized the city for setting the federal relief funds aside for those building purchases. On Friday, he declined a deal to purchase the former Alaska Club fitness center on Tudor Road in Midtown for a 125-person homeless shelter, a deal set up by former Acting Mayor Austin Quinn-Davidson.

His proposal also asks for $3.5 million from federal American Rescue Plan Act funds that the Assembly this spring dedicated to a spruce beetle kill mitigation project that would remove dead trees from around the city to protect against wildfire. The proposal asks for $250,000 from the Maintenance and Operations Department and another $50,000 in unallocated funding.

The Bronson administration estimates total construction costs at a little more than $14.3 million. That includes $10.8 million for “turnkey construction services” such as grading, utilities, concrete, paving, HVAC, fencing, insurance, erecting the structure and more. Another $3.5 million would go to purchase the structure and building materials.

Bronson’s proposal to build the navigation center on a piece of city-owned land near the intersection of Tudor and Elmore roads poses another hurdle: the city would have to find a new place to store the Anchorage Police Department’s 500-plus evidence vehicles.

A spokesperson for Bronson said that the costs are different due to the size, scope and square footage of the different estimates.

The estimates both propose moving the vehicles to the same piece of land on Elmore Road near the Anchorage School District Transportation Center.

The police department has proposed using 5 acres of land, and the estimate includes costs for paving, fencing and security. Bronson’s estimate would create a smaller lot, one that is equivalent in size to the current 3-acre evidence lot and includes fencing and security, according to the proposal.

In addition to the $15 million request, phase 2 of construction would cost about $7.26 million, according to Morris’ letter. He said the administration believes it has identified “additional funding sources” for the costs of Phase 2, which include modular bathroom, shower and laundry facilities, partition walls, beds with privacy partitions, mattresses, cabinets, lockers and USB charging stations in each unit.

Documents show that the Bronson administration has so far consulted heavily with two companies on the project. Sprung Structures, a Canadian company with a global footprint that also made facilities for homeless services in Reno and San Francisco, would likely manufacture the facility. Olgoonik Construction, owned by Olgoonik Corporation, an Alaska Native village corporation, has sent estimates for preparing the site and erecting the structure and utilities.

Craig Campbell, Bronson’s appointee to be his chief of staff, last week at meeting told Assembly members that they have not ruled out the usual contract procurement process.

“We built our criteria for what we need out there based on what Sprung Structures has available. We’re going to be looking at whether that is a competitive process or whether it’s sole sourcing,” Campbell said.

Multiple Assembly members have expressed skepticism over the proposed shelter. They doubt that it will be finished before winter weather arrives and worry the costs will be much higher than currently estimated.

Three Assembly members on Friday sent a letter responding to the Bronson administration’s request for money, urging the mayor to pause his plans and “concentrate on a realistic and affordable plan for this winter.” Assembly member Meg Zaletel, who chairs the committee on housing and homelessness, and members Felix Rivera and Forrest Dunbar, signed the letter.

They asked for more time and planning, noting that they don’t oppose the goals or the concept that the Bronson administration has proposed, but said that “what we have is a concept, not a fiscally responsible plan of action that has been thoroughly vetted.”

The members suggested continuing to use Sullivan Arena as a mass care facility through the winter, or finding another city-owned building to continue shelter operations. They also suggested piloting the navigation center concept at the Sullivan or another location.

In the spring, the city receives its next $50 million in federal ARPA relief money, they said.

“Waiting until these funds are available, combined with the remaining Cares Act fund balance gives the administration time to pull together a comprehensive plan and budget and even start design on a new facility as part of a comprehensive strategy to address homelessness and service gaps within the Municipality,” they said.