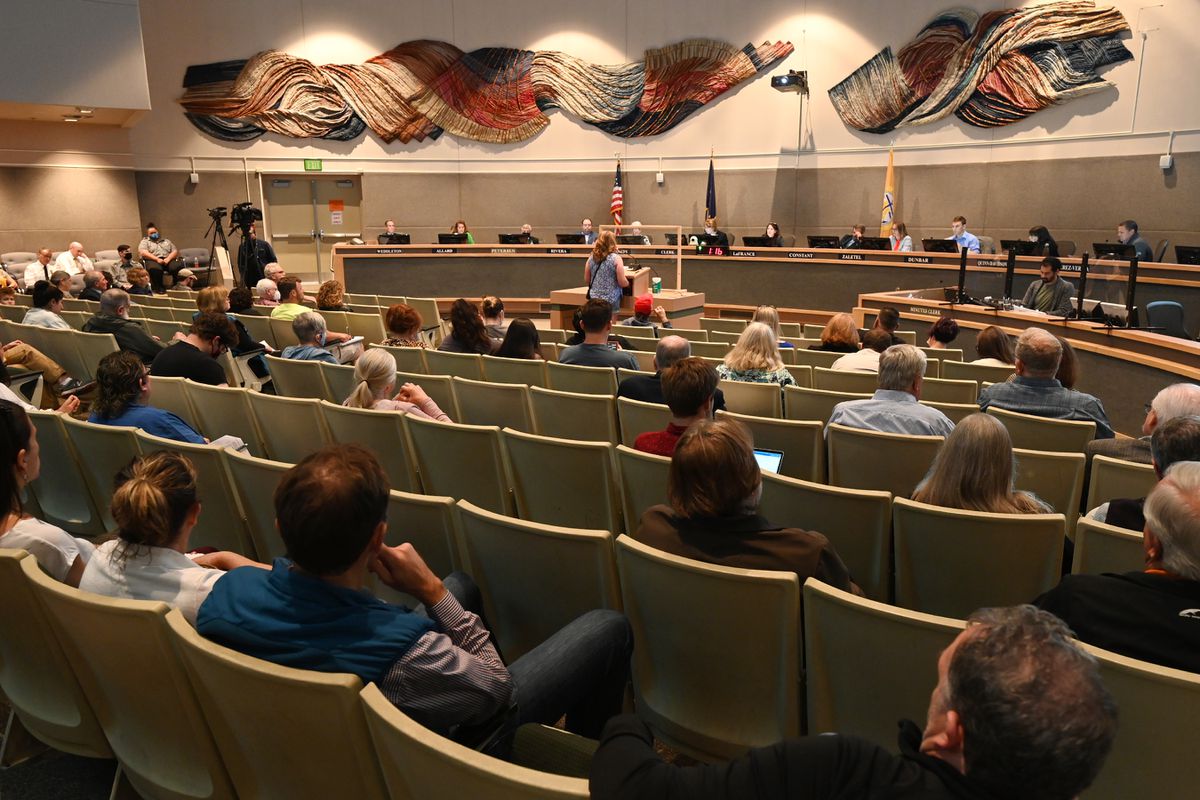 The Anchorage Assembly on Tuesday killed, at least for now, a request from Mayor Dave Bronson for $15 million to begin constructing a large homeless shelter in East Anchorage.

In a procedural twist, members of the Assembly refused to put Bronson’s proposal on the agenda for a public hearing at their next meeting on July 27, effectively rendering the request dead.

Assembly member Crystal Kennedy said that they were not moving the item forward in order to “allow it to kind of die a quiet death.”

Bronson has urged the city to construct a 450-person homeless shelter on a piece of city-owned land near the intersection of Tudor and Elmore roads. He’s found little support for his plan from Assembly members, who harbor concerns over the costs and size of such a shelter. His proposal was set to be introduced at Tuesday’s meeting.

“If 50% oppose a plan and 50% support it, we really don’t have a good way forward,” Kennedy said. “I think that really, we’re at this verge of really being able to come forward with a more cost-effective and efficient and palatable plan.”

Matt Shuckerow, the mayor’s interim spokesman, said that Bronson was “obviously a little bit disappointed that we couldn’t move forward and begin the public process on this important conversation.”

“The mayor and his administration have made it very clear they’re focused on continuing to work together, continuing to work with the Assembly members,” Shuckerow said. “This is just a small setback, but ultimately it’s about collaboration, working with the stakeholders. Again, as everyone knows, the mayor came and presented this plan well before he took office, and this is just going to be an ongoing process.”

Assembly Vice Chair Chris Constant said that now, no plan is on the table. The message from the Assembly to the administration is, “We need a plan that works for a majority of the people,” he said.

It is not clear what will happen next, as city officials continue to try to find a consensus on how Anchorage should move forward in sheltering its homeless population.

Assembly members had concerns with the cost and the scale of the project.

Costs had already risen from Bronson’s original request of $15 million to about $22 million to complete the construction of the shelter, according to a letter sent recently to Assembly members from Bronson’s homeless coordinator appointee, Dr. John Morris.

In the letter, Morris said the additional $7 million would be necessary for things such as beds, partitions, bathrooms and showers. Millions more would also be needed to provide services and run the facility.

“What we were hearing about the current plan, it’s kind of this cascading list of complications, and we don’t understand how they’re going to be resolved,” Assembly member Meg Zaletel said during an interview Tuesday.

Two Assembly members had pushed back on Bronson’s proposal and were set to offer their own dramatically scaled-back counterproposal that would have made any money for the shelter contingent on Bronson purchasing a former gym in Midtown for use for homeless services. Zaletel, chair of the committee on housing and homelessness, and member Forrest Dunbar, who lost to Bronson in the runoff race for mayor, sponsored the counterproposal.

The changes would have scaled down his proposal to a 150-person shelter, tying funding to the the purchase of the former Alaska Club building on Tudor Road.

The counterproposal, laid on the table during Tuesday’s Assembly meeting, was also killed when the Assembly refused to move Bronson’s proposal forward.

Bronson last week turned down a deal to buy the building, which had been set up by former Acting Mayor Austin Quinn-Davidson. It had been a pivotal part of her plan to create more homeless shelter beds before winter as the city stands down its mass shelter at Sullivan Arena.

Several Assembly members have pushed Bronson to again consider purchasing the Alaska Club for a shelter to get people through the winter.

Alaska Club president and CEO Robert Brewster said that he is still willing to work with the city on a deal to purchase the building.

The city had invested a large sum of nonrefundable money on the deal, a total of $440,000 — earnest money of $50,000 and another $390,000 to extend the closing date until July 9, after Bronson took office. That money could still apply to the purchase if Bronson changes his mind, Brewster said.

“We would be comfortable applying that to the purchase price if we came to some kind of an agreement in a reasonable period of time,” Brewster said.

The city has for months sought to find a way to care for its homeless population, which has swelled during the COVID-19 pandemic.

The Assembly in March passed a resolution directing Quinn-Davidson to come up with a plan to stand down its mass care shelter at the Sullivan Arena by the end of September, which the city created in response to the pandemic.

Members Zaletel, Dunbar and Felix Rivera last week sent a letter to Bronson, urging the mayor to pause his plans and “concentrate on a realistic and affordable plan for this winter.”

Morris has so far been adamant that a single, large homeless shelter, in addition to the city’s current shelters like Brother Francis, is the best approach to addressing the city’s needs.

Many Assembly members have called Bronson’s proposal laudable for its focus on helping the homeless, but have also said that it had too many compounding issues and rising costs.

Complications include moving the Anchorage Police Department’s evidence vehicle lot, which houses more than 500 vehicles and is the site of Bronson’s proposed shelter. The Assembly has received conflicting estimates for the cost of relocating that lot — a $4 million estimate from the police department, and an estimate of a little more than $659,000 from the Bronson administration.

Community councils near the area where the proposed shelter would go have also expressed trepidation about the proposal and its potential impact on their neighborhoods.

The University Area Community Council, which covers an area directly north of Bronson’s proposed shelter site, sent a letter to the Assembly and the mayor, calling for a smaller, 150-person shelter instead, and for the Bronson to consider the Alaska Club building.

“The UACC strongly supports efforts to reduce homelessness in the municipality. We commend Mayor Bronson for addressing the issue, but believe the proposed facility is far too large,” they wrote. “Smaller shelters are better. Insufficient time remains to complete this facility by the onset of colder weather in Fall 2021. The proposal is ill-defined and there is no Plan B.”

Following the meeting Tuesday, Weddleton, who moved to advance Bronson’s proposal, said that he is “completely puzzled” by the actions of his fellow Assembly members. Now there are no proposals for the Assembly to discuss at its next meeting, winter is coming soon and the city needs a plan, he said.