Dixiano sentenced to 20 years for 2010 murder of wife, theft 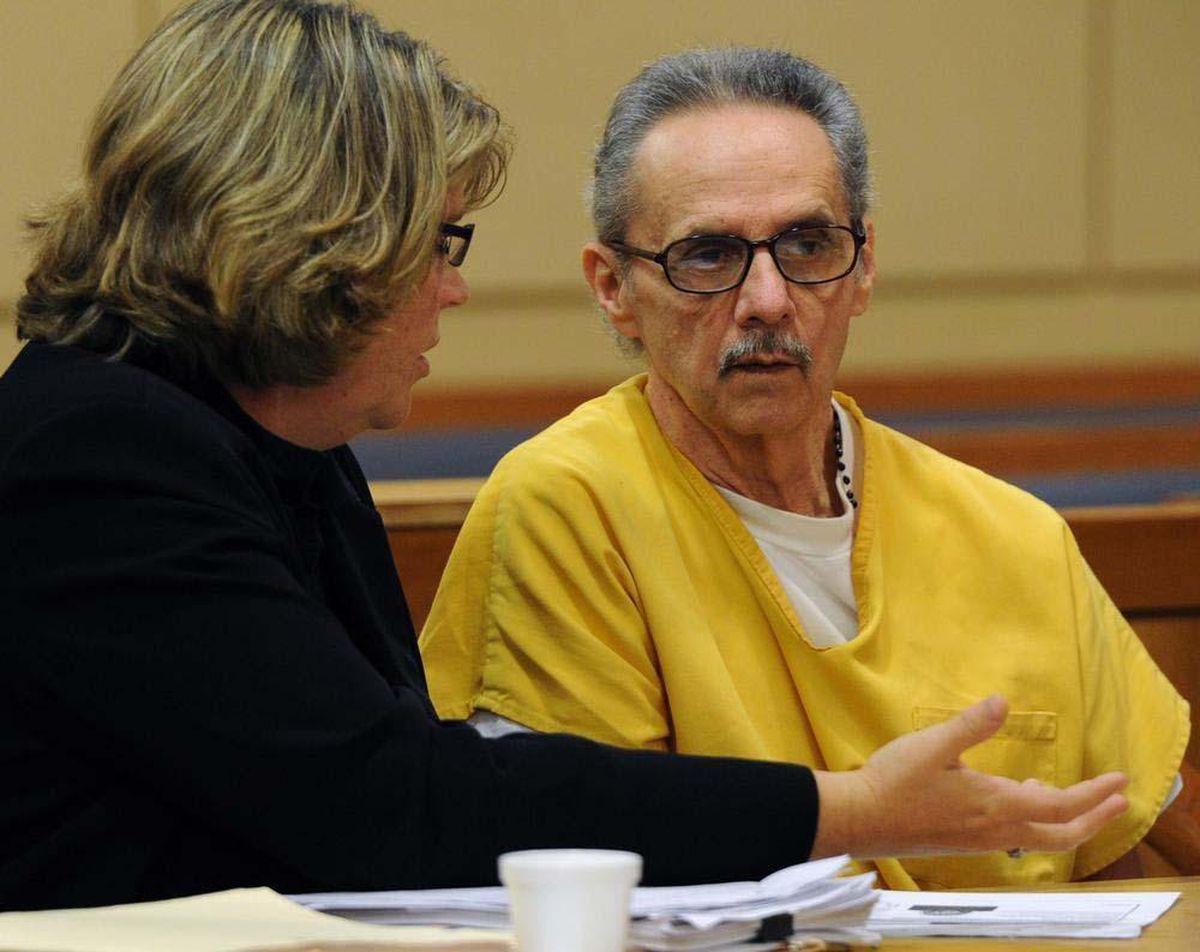 William "Mike" Dixiano, who admitted to killing his wife and stealing hundreds of thousands of dollars from a mentally disabled man, confers with attorney Marcelle McDannel at his sentencing.

William "Mike" Dixiano, who admitted to killing his wife and stealing hundreds of thousands of dollars from a mentally disabled man, confers with attorney Marcelle McDannel at his sentencing.

An Anchorage man who admitted to killing his wife and stealing hundreds of thousands of dollars from a mentally disabled man was sentenced to serve 20 years in prison Friday.

In a deal with prosecutors, William "Mike" Dixiano, 63, pleaded guilty this summer to second-degree murder and first-degree theft in exchange for a more lenient sentence.

Dixiano told an Anchorage detective in May that he beat his wife, Angela Dixiano, to death with a baseball bat in 2010 and dumped her body near Long Lake in the Matanuska Valley north of Anchorage. He also admitted to stealing money and a house from a man named Sam Lee, who, because of his mental disability, had a multimillion-dollar trust fund set up for him by his East Coast physicist parents, according to charging documents.

Dixiano was Lee's case manager at a mental health treatment program and maintained a relationship with the disabled man after he quit the job, according to a court-appointed conservator for Lee's trust.

Superior Court Judge Michael Spaan said Friday he "didn't like it at all" that prosecutors made a deal with Dixiano to put him behind bars for only 20 years for the murder and three for the theft, to run concurrently.

"Both crimes are so bad, it does give me pause about taking this deal," Spaan said. "(But) life is uncertain, and I know finality is important."

From 2010, when a friend reported Angela Dixiano missing, until Dixiano's statement to police in May, a cloud of uncertainty about what happened to Angela had lingered over the case.

Prosecutor Clint Campion told the judge that the plea deal was made in the spirit of clearing up that uncertainty and bringing closure to Angela's family and the detectives who'd worked hard to build a strong case against Mike Dixiano.

"They agree. They support that sentence. I wouldn't be here if they didn't," Campion said.

According to charging documents, Angela threatened to expose the fraud scheme during a party with friends in April of 2010. Mike told staff at a hospital he was worried she was a danger to herself and had her held temporarily. Her release from the hospital was the last time anyone, aside from Mike, reported seeing her alive.

While Angela was still missing, detectives learned that her husband had opened a joint account with Sam Lee years earlier and forged checks sent to Lee to fund an extravagant lifestyle. Among other things, Dixiano bought five Chevrolet Corvettes and a motor home, the charges said. He also gained power of attorney over Lee, bought a Jewel Lake-area house in Lee's name, and either convinced Lee to sign the house over to him or forged Lee's signature on documents effecting the transaction.

"During that time, Mr. Dixiano helped himself to the money. And it wasn't lost on me that Mr. Lee was living in a trailer while Mr. Dixiano was living in the house with five Corvettes," Spaan said Friday. "It was a terrible crime."

Lee told the Daily News shortly after the fraud charges were filed that he didn't believe the accusations and still considered Dixiano a friend.

That had all changed, said the conservator of his trust fund, Janet Hansten. Accountants are still sorting out exactly how much money Dixiano siphoned from Lee, but an early estimate put the amount somewhere between $750,000 and $1 million, Hansten said.

Lee was shocked to learn the details of the theft, but he'd since come to understand the truth about what happened, Hansten said.

"I think it's been hard for him to accept that this crime was committed, that he was a victim," Hansten said. "He believed that this was a person he trusted and was his friend."

And Lee was devastated to hear about the death of Angela Dixiano, whom he considered a close friend, Hansten said.

Angela's mother, Kathy Neal, spoke by phone during the sentencing hearing and told the judge that Mike Dixiano met her daughter when he was a drug and alcohol counselor. Neal said she had trusted Mike and that he told Neal her daughter died after he gave her $10,000 to go to Las Vegas. He even held a memorial service for Angela, Neal said.

"I have to mourn all over again ... I just want Mike to know he's a liar, a thief, and he's a horrible person," Neal said. "I wish to heck she'd never have met him."

Acting on his mixed feelings, Spaan did something not included in the plea agreement: He eliminated the possibility of discretionary parole for Dixiano.

According to Mike Dixiano's court-appointed lawyer, Marcelle McDannel, mandatory parole for good behavior meant her client would likely be released from prison around the age of 76 -- if he survived that long, she said.

Her client declined to give a statement in court because he felt his message might be distorted by the news media, McDannel said. Admitting to the crimes he'd committed said a lot about the remorse he felt, she said.

"Mr. Dixiano went through a long process of introspection, reflection, and once he did make a statement to police and revealed the location of where Angela was, you could actually see him lighten. You could see the burden of guilt lifting a little bit," McDannel said. "It's still there. It'll be with him for the rest of his life."

Casey Grove is a former reporter for the Anchorage Daily News. He left the ADN in 2014.