How a service dog opened an Alaska veteran's world 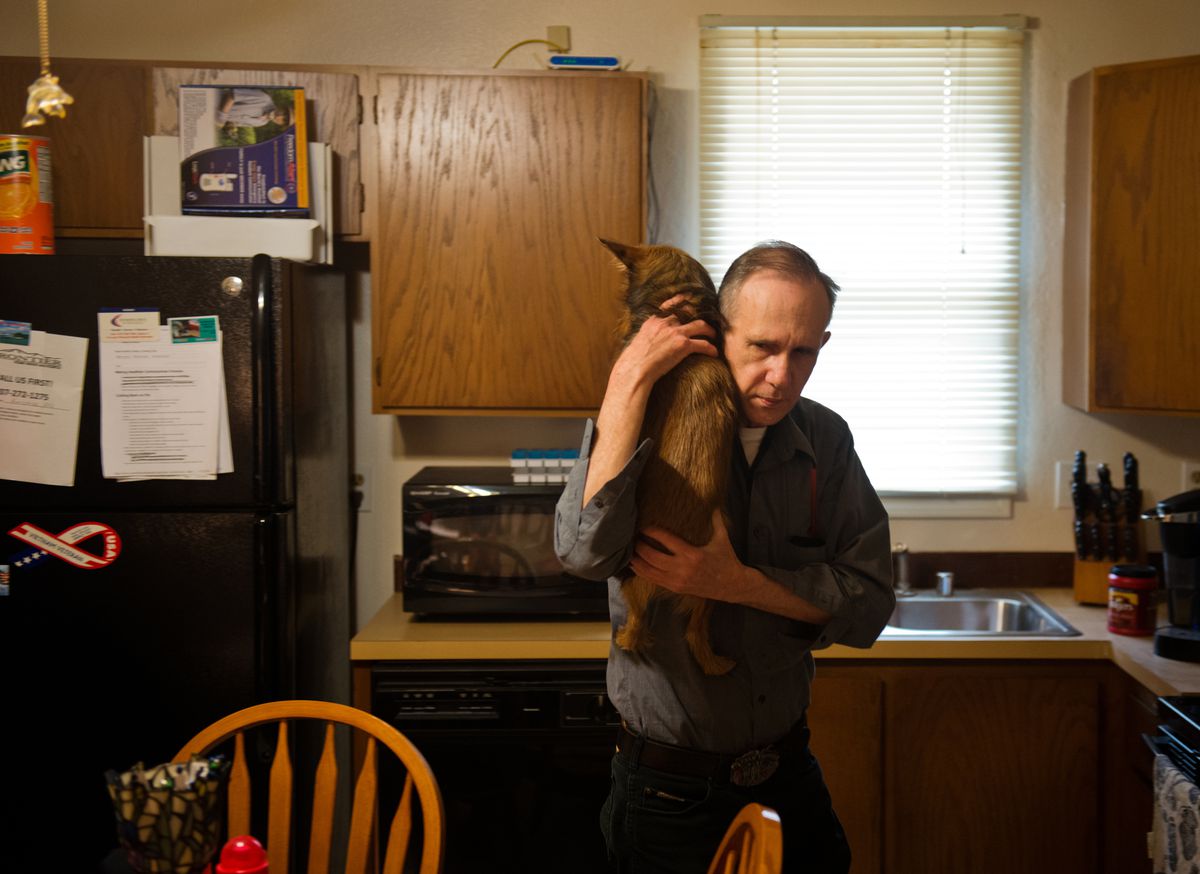 Mike Gervell carries Mikey in his Anchorage home on Tuesday, April 14, 2015. Gervell was paired with the dog by Midnight Sun Service Dogs earlier this year.

Mike Gervell carries Mikey in his Anchorage home on Tuesday, April 14, 2015. Gervell was paired with the dog by Midnight Sun Service Dogs earlier this year.

In 1970, Mike Gervell finished serving his second tour of duty in the Vietnam War. With an honorable discharge, he returned to his hometown of Anchorage and found a job scooping ice cream.

Gervell was just 20 years old. Ever since, he has lived a solitary life.

"My whole life I never needed nothing," he said. "Depended on myself pretty much."

Four and a half decades passed in a quiet struggle for Gervell. After he retired in 2011 from a career in air cargo, his daily life narrowed. He spent most of his time in his house. Meals from the Taco Bell or McDonald's drive-through. Grocery shopping at 3 a.m. to avoid crowds. He slept four or five hours a night, with night terrors startling him awake.

Then, in February, a dog opened his world.

The dog's name was, of all things, Mike. Twelve pounds of border collie and short-haired terrier with a soft belly and tiny little piranha teeth.

Gervell had never owned a dog before.

But he was collapsing under the weight of mounting health problems, some linked to his service in Vietnam. Coronary artery disease. Ischemic heart disease. Traumatic brain injury. Post-traumatic stress disorder. Anxiety. Depression.

He had considered a service dog for years. Finally, something made him call Midnight Sun Service Dogs, an Anchorage group that provides service dogs and training opportunities to people with special needs, with a focus on veterans suffering from PTSD.

"He was always very gruff on the phone," she said. "It was almost like we were intruding on his life, even though he came to us."

In person, he was stone-faced and didn't look like he was taking care of himself.

Gettys matched Gervell and Mike the dog, who became known as Mikey to avoid confusion. They started training together, with Gervell venturing out of his house to big box stores like Lowe's, where he and his prospective dog would practice trust-building exercises amid throngs of shoppers.

After a while, Gervell told Gettys he supposed she wanted Mikey the dog to do an overnight visit with him. It was his way of saying he had grown hopelessly attached to the dog.

Gettys said yes, and Mike and Mikey became a pair. Now they are inseparable.

Mikey pushed Gervell to places he would never have imagined he'd venture. He attends nearly every group training session that Gettys schedules.

His anxiety, depression, traumatic brain injury, the night terrors -- all of his troubles, Mikey seems to wordlessly understand. Take the way Mikey the dog hates elevators, but will calmly accept riding in one when he sees the alternative is flights of stairs, dangerous for a man unsteady on his feet.

"I don't know how he found out about the problems I got, but he sure knows a lot," Gervell said. "Probably more than the doctors do."

Gervell, 65, was born in Memphis and raised in Anchorage. He enjoyed a free-ranging childhood in a city with fishing streams and open spaces. In 1967, he joined the Navy. His older brother was doing the same. He turned 18 at boot camp.

Gervell served aboard the USS Hull, a destroyer which provided gunfire support to troops ashore, firing on enemy positions, often with spotter planes helping to provide the coordinates. The Hull was called into close proximity and could travel up some rivers.

"We had speed and maneuverability," he said. "That was our biggest defense."

Gervell, like most, had several jobs aboard the ship. He steered. He stood lookout. He worked to re-arm the ship, loading pallet after pallet of ammunition every two or three days. When the Hull was called to search for downed planes and pilots, Mike and others scanned the waters, sometimes in typhoons.

When his shift was over, the roar of firing guns was inescapable.

For its duty in 1968, the chief of naval operations awarded the Hull crew the Meritorious Unit Commendation. That ribbon, along with other ribbons, medals and dog tags, hang on Gervell's living room wall today.

It's hard for Gervell to put what affected him so profoundly in those teenage years of war into words.

During the decade after he returned to Anchorage and part of the next, Gervell didn't speak a word about his experience. Instead, he and other veterans would go out drinking, using cases of beer and shots of liquor to tell the stories for them.

In 1984 Gervell gave up alcohol. More than another decade passed before he started seeing any kind of a counselor. He was able to maintain a long career in cargo operations for a major airline.

Gervell never married, started a family or lived with a girlfriend, he says.

"A lot of that has to do with trust," he said. "You kind of build up a wall around you. I wouldn't let nobody get close to me."

Gettys, the founder of Midnight Sun Service Dogs, was once isolated from the world herself. She says her own own history includes PTSD from a violent relationship, as well as chronic health problems.

"I was not leaving my house. I was very sick," she said. "I kept my doors locked, my curtains shut. I wouldn't go to my kids' school events. I wouldn't do anything."

A dog helped her get better and made her a believer in the power of animals to soothe hurts both visible and hidden. She became an American Kennel Club evaluator, studied with dog obedience trainers and ultimately founded Midnight Sun Service Dogs.

She says she ran her savings down getting the organization up and running. The endeavor is now mostly supported by donations and occasional fundraisers.

At last count, the organization has placed more than 450 dogs with handlers.

Gettys gets the dogs from shelters or as donations from breeders. She never buys dogs.

The dogs Gettys offers are primarily trained to do tasks -- they can remind owners to take medications, create buffer space for them, alert their owners to danger and wake people suffering from night terrors. But they also become companions for daily life.

Gettys says she is inundated with applications from people who want dogs. Applicants undergo an extensive interview. Anyone with a history of violent crime against a person or animal is ineligible. Her policy is to only take people willing to put time and work into training the dogs.

"There's some people who like the concept of having a service dog, but they're not ready to live life yet," she said.

Veterans are of particular interest to her. Most of her clients are back from war in Iraq or Afghanistan.

"We just came out of this long war with 17-, 18-, 19-year-old kids -- older people too -- going to war for us," she said. "Their families sacrifice. And they come back and people think everything is fine."

Sometimes her clients tell her a service dog has helped them scale back on medication or, like Gervell, emerge from isolation.

"You don't get over PTSD," she said. "Your traumatic event will stay with you. But you can certainly learn how to relive life."

'The smartest dog on the planet'

On a recent windy morning, a group of Midnight Sun service dogs in training and their handlers met on the Park Strip. A few people showed up. Gettys set up a makeshift dog agility course, with long nylon tubs for the dogs to run through and posts for the dogs to weave around.

Agility, obeying commands, trust and communication are all goals of the training sessions.

Even if progress is slow, the training process is sometimes the first step to getting people to reacquaint themselves with the wider world, as it was with Gervell.

He now attends almost all of Gettys' training sessions, which are free for participants, like every other aspect of the program. In other dog trainers, he has found something like a community.

"They are just really good people," he says.

Gervell has even been taking Mikey to the busy Loussac Library once a month to participate in a program that gives children working on their reading skills the chance to read aloud to a nonjudgmental audience in the form of a service dog. It takes some medication to calm his nerves enough to get him in the library, but he goes.

Mikey, Gervell says, has a fan club of little kids.

At the morning training session, Gervell and Mikey strolled up to the Park Strip. Mikey was in a bit of a mood that morning. Eventually he climbed into Gervell's lap.

Even in testing moments, Gervell talks about the dog like an awestruck new parent.

"I think he must be the smartest dog on the planet," he said with wonder.

'He was there, watching me'

The Mike Gervell who called April Gettys was a man who had calcified into his lonely routines. Only a few months have passed since then. But Gettys marvels at the changes she sees.

Gervell carries himself differently now, she says. He chuckles and chats and buys Mikey little treats and fancy collars. He jokes.

He seems to have a purpose now, a place to aim his love.

They go to the grocery store and to dentist appointments. Mikey curls up at his master's feet as he reclines in his easy chair. They speak the dog-owner language of yard breaks and walks. If Gervell disappears behind a closed door for too long, Mikey is there, gently whining for him.

Gervell, an intensely private man, has even chosen to tell his story.

But his hope is that someone else who was suffering like he was will read it. Maybe a service dog could give somebody else the peace Mikey has given him.

Gervell has started letting the dog sleep on his bed. One night, he was having a nightmare about being in Vietnam. Mikey woke him up.

He got up to take medication and returned to bed. At the time, Mikey was recovering from being neutered and was haloed by a large plastic dog cone around his neck.

In the dark, Gervell could feel his cone pressing against his forehead.

"He was there, watching me," he said. "Making sure it's not going to happen again."