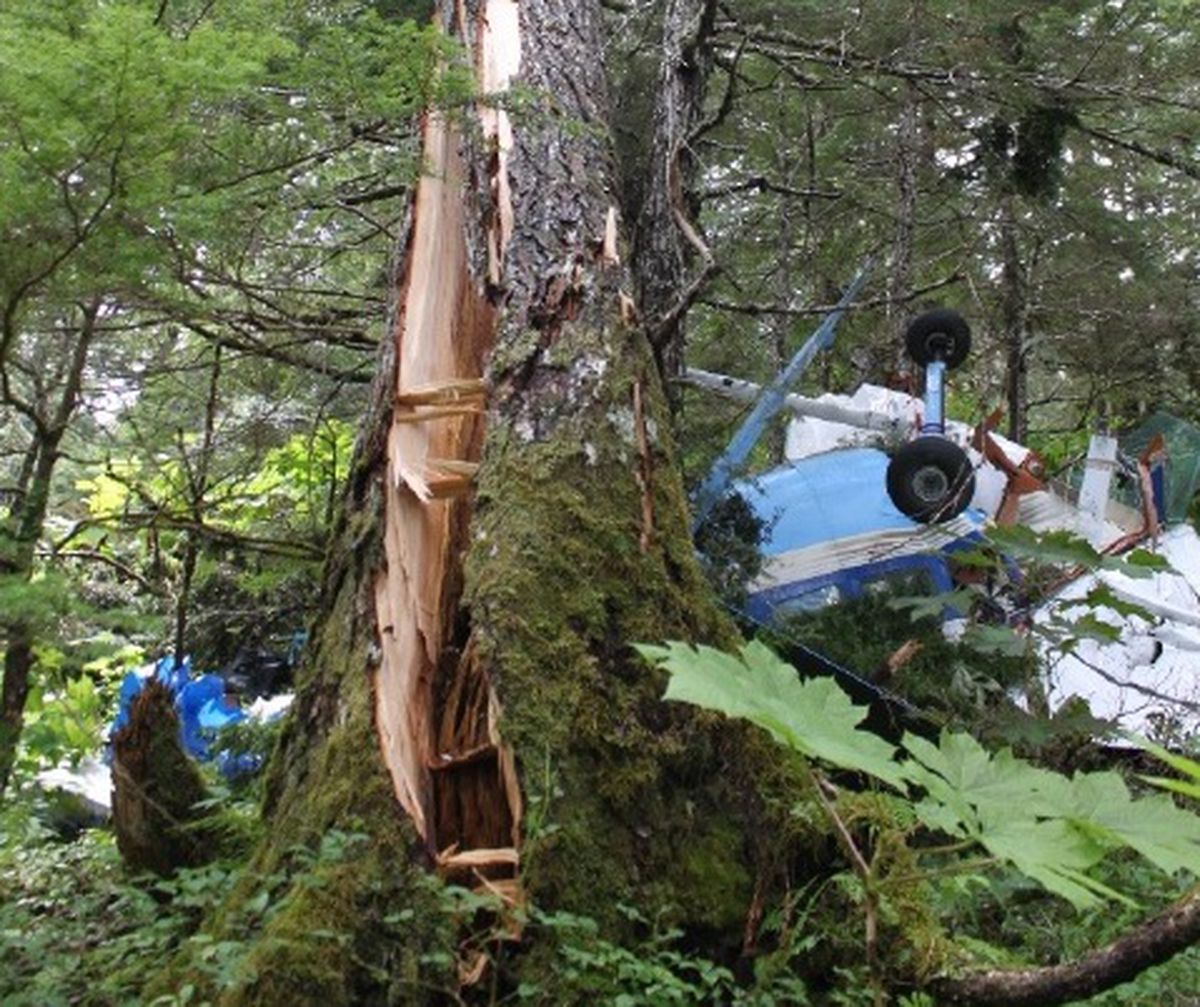 A Wings of Alaska Cessna 207A crashed into a spruce tree near Juneau on July 17, 2015. Pilot Fariah Peterson, 45, died in the crash; all four passengers were seriously injured. (From NTSB)

A Wings of Alaska Cessna 207A crashed into a spruce tree near Juneau on July 17, 2015. Pilot Fariah Peterson, 45, died in the crash; all four passengers were seriously injured. (From NTSB)

On June 25, 2015, a de Havilland Otter operated by Promech Air crashed in Misty Fjords National Monument. The pilot and all eight passengers were killed.

Three weeks later, on July 17, a Wings of Alaska Cessna 207 on a scheduled flight from Juneau to Hoonah crashed into mountainous terrain. The pilot was killed and four passengers seriously injured.

The Promech and Wings crashes had something notable in common: Both companies were members of the Medallion Foundation.

Medallion was formed as a nonprofit by the Alaska Air Carriers Association in 2001 to "improve pilot safety awareness and reduce air carrier insurance rates." Through the direction of the late Sen. Ted Stevens, the nonprofit organization received an initial federal grant of $3 million in 2002.

According to budget requests later filed with the state, Medallion received $17 million in federal funds by 2013.

More recently, the organization has also received more than $750,000 from the state.

According to publicly filed records, an average of 44 percent of Medallion's annual income pays salaries. This does not include other administrative expenses or the minimum of $60,000 paid annually since 2013 for rental of a building owned by Executive Director Gerard Rock, where the foundation's offices are located.

By completing each "cornerstone," members receive specific Medallion Stars. Those completing all five Stars are then eligible for a Shield after further evaluation.

On its website, the organization points to escalating accident statistics in the 1990s as an impetus to its formation.

According to the National Transportation Safety Board database, in the 10-year period between Jan. 1, 1990, and the last day of 1999 there were 1,733 aircraft accidents in Alaska; 377 of them involved air taxis and small commuters (FAR Part 135 operators).

However, it must be noted there was a far more dramatic impact on the Alaska aviation industry in this period than Medallion.

In 2002, Sen. Stevens spearheaded the passage of the Rural Service Improvement Act. Aimed  at stabilizing the passenger, freight and mail system for rural Alaska, RSIA restructured how mail contracts were awarded and resulted in more than two dozen scheduled air carriers going out of business or being purchased by competitors.

The impact of the act on Alaska's aviation landscape cannot be overstated, nor can technological innovations such as Capstone and expansion of the FAA's weather-reporting system be ignored. Medallion does not exist in a vacuum and it would be inaccurate to suggest it is solely, or even primarily, responsible for an overall reduction in accidents.

Most third-party safety organizations like Medallion developed in recent years as air carriers sought to combat rising insurance rates. Generally, they issue public awards, like Stars and Shields, for completion of administered materials.

Recently, the NTSB criticized one such organization, Argus International, after a multiple fatality accident in Ohio. Board Member Robert Sumwalt stated Argus, which had been awarded a "Gold" rating to the charter company involved in the crash, provided only an "illusion of safety" to the aircraft's passengers.

A similar perceived sense of security was evident in Alaska in 2013 when Gov. Sean Parnell spoke to the Chamber of Commerce.

"Medallion certification diminishes the number of lost lives and injuries due to aviation accidents," Parnell said. "So if you are traveling on a Medallion-certified air carrier, you are traveling with people who have been trained above and beyond the minimum."

As Rock told investigators:"… A couple of these industries now require anybody flying for them, that they participate in Medallion for flying in Alaska. And I would say the main reason for that, when you look at the oil industry and the mining industry, most of these companies are from Outside and don't have a lot of Alaska safety experience, don't have winter operation experience. And Medallion gives them a tool to make sure the carriers flying for them here in Alaska actually kind of meet the requirements of flying, you know, in this type of environment."

There were problems with Medallion at the Department of Public Safety, however. According to the recently retired aviation section supervisor, the pilots were not involved in the new safety program.

"I don't feel like people really participated in it," she told investigators. "… I couldn't seem to get the trooper pilots to be into it."

The director of the Alaska Wildlife Troopers (who oversaw the aviation section), told investigators: "… Thinking back over these safety meetings, a lot of it was not even aviation related. It was, you know, like ice falling off a roof or, you know, maybe how fuel may have been stored. I don't recall ever seeing one flight-type safety issue."

In its investigation of the Helo-1 crash, the NTSB found in addition to errors by the pilot, there was "… inadequate safety management, which prevented the organization from identifying and correcting latent deficiencies in risk management and pilot training."

Medallion's influence was also studied in the investigations into the Promech and Wings of Alaska accidents, where there was some public confusion over their Medallion status.

In a 2016 interview with Alaska Dispatch News, Rock stated both companies "failed audits required to maintain membership and were on a yearlong suspension to correct deficiencies."

However, the NTSB report on the Wings crash includes a series of email exchanges between Medallion and Wings' owner, SeaPort Airlines, two months before the Hoonah accident. Those exchanges resulted in a voluntary suspension of the Shield but retention of the five Stars. The company's Medallion membership remained intact.

In the Promech investigation, its company president stated they held the CFIT Star and were in the process of obtaining the Safety Star. As that report notes, there was no evidence of Promech's Medallion membership status being suspended.

Rather, the foundation refused to respond to multiple NTSB requests "regarding Promech's external and internal Medallion audits…"

Those investigations made clear that both companies struggled with decision-making, as well as suffering operational control and apparent FAA oversight failures. Further, the circumstances surrounding the Promech crash in particular, which involved a line of air tour carriers following a pre-established route in marginal weather conditions, are familiar.

They echo previous "follow-the-leader" accidents including the 1994 crash of Wings of Alaska enroute to Juneau (seven dead, four seriously injured), the 1995 crash of Island Air Services in Kodiak (four dead), and the 2007 crash of Taquan Air in Misty Fjords (five dead).

In all of those accidents, as in nearly all of the finalized reports for fatality crashes in the past 10 years involving Medallion members (in one accident, the cause is unknown as the aircraft was unrecoverable), the probable causes were due to errors committed by the pilot. During the Helo-1 investigation, Bob Gastrock, a Medallion senior program manager, addressed this topic:

"And, you know, the pilot decision processes sometimes probably — I hate to say it, but 90 percent of the time, really why these accidents happen, I don't think it's so much the operator. The operator themself (sic) management, provides the tools, the training, but sometimes pilots just make mistakes and unfortunately that's just kind of what leads (to) this."

The NTSB recently determined the causes for both the Promech Air and Wings of Alaska crashes were the pilot's decisions to fly under visual flight rules into instrument meteorological conditions.

There were contributing factors as well, including, in the case of the Wings crash, the FAA's failure to properly monitor the company, and the company's failure to follow its own operational control procedures.

For Promech Air, the board also cited a corporate culture that "tacitly endorsed flying in hazardous weather and failed to manage the risks associated with the competitive pressures affecting Ketchikan-area air tour operators."

Are the programs working?

There are many questions to be raised about the effectiveness of the Medallion Foundation's programs on the recurrent problems plaguing Alaska aviation, and it is doubtful its standardized programs are addressing the issue of individual decision-making with actual pilots themselves.

Medallion supporters need to think about the failures among the foundation's membership and what that says about the organization's methods. At some point, it must be asked if the programs are working to increase flight safety, or serve more to impress unwitting passengers, federal investigators and insurers.

The brutal truth is what happened to Promech Air and Wings of Alaska in 2015 was just more of what has been happening in the state for decades. It was happening before the funding of millions of dollars and the awarding of Stars and Shields, and it shows no signs of stopping.

In May 2016, the FAA issued a letter to the more than 200 regional operators in Alaska. In the wake of five serious crashes dating back to Promech, the agency noted such accidents generally occur due to "inappropriate or nonexistent safety cultures…"

The agency encouraged companies to seek the assistance of the Medallion Foundation.

What the FAA failed to note was three of those accidents, like so many before them, involved Medallion members.

Colleen Mondor is the author of "The Map of My Dead Pilots: The Dangerous Game of Flying in Alaska."