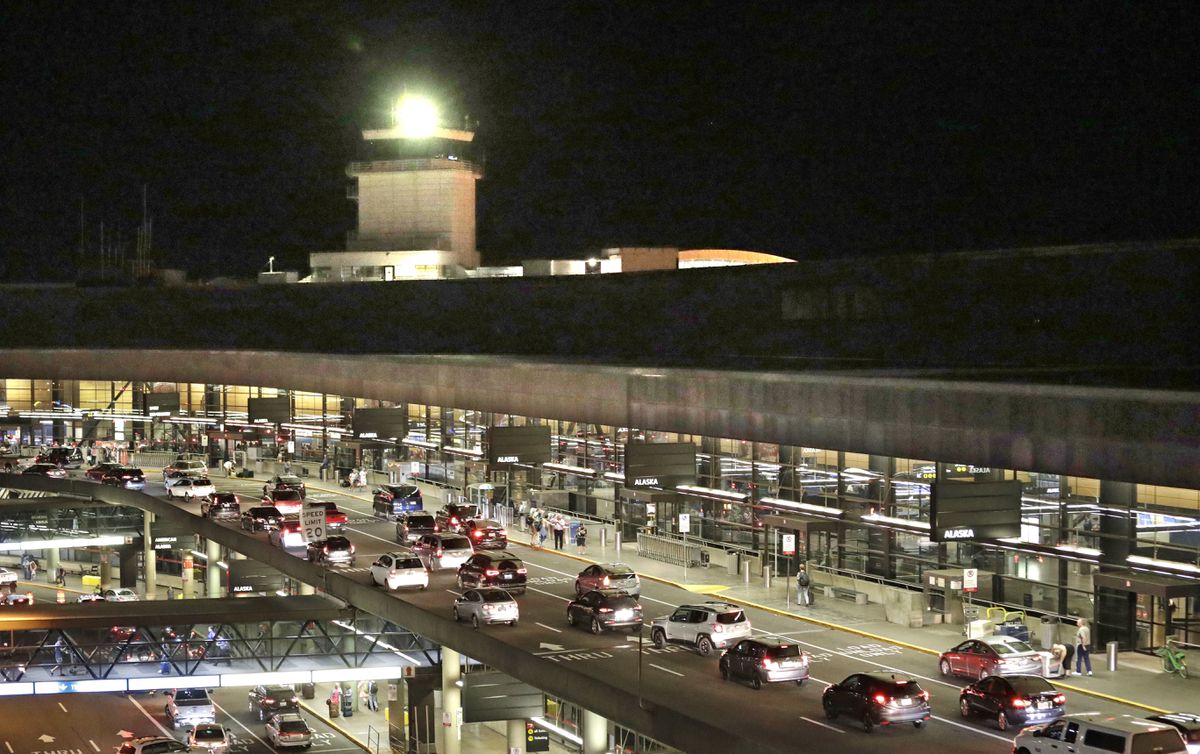 SEATTLE — The airline employee who took a plane from Sea-Tac Airport on Friday night and performed mid-air stunts over South Puget Sound before crashing on an island was 29-year-old Richard Russell, according to multiple sources, including one in law enforcement.

"He was a quiet guy. It seemed like he was well liked by the other workers," said Rick Christenson, an operational supervisor with Horizon Air who retired in May. "I feel really bad for Richard and for his family. I hope they can make it through this."

Russell was presumed killed in the crash of the Horizon Air Bombardier Q400 turboprop on Ketron Island, just west of Steilacoom. Investigators were searching the site Saturday.

A man who answered the door of the Graham home of Russell's mother-in-law Saturday afternoon said the family is in shock and were awaiting more information before speaking to the media. Relatives were arriving at the home as members of the media gathered outside.

Russell worked as a member of Horizon's tow team, Christenson said, and helped handle baggage for the airline.

[Report: Airline employee who stole and crashed Sea-Tac plane had lived in Wasilla]

Two-person tow teams are responsible for moving airplanes on the tarmac. One person drives a tow tug, pulling the plane. The other communicates with the tower from inside the airplane's cockpit and can apply the plane's brakes in an emergency, Christenson said.

Tow teams are trained how to use some airplane systems such as the auxiliary power unit, hydraulics and radios, said Christenson, who did not know Russell well.

Before he realized Russell was involved, Christenson watched as the incident played out Friday night. Christenson was sitting on the deck outside his cousin's home, looking out at the Tacoma Narrows Bridge and Puget Sound as the sun reddened and fell into summer's haze.

"It was absolutely beautiful," he said.

Ten minutes later, he said, a commercial plane cruised about 500 feet above his cousin's home, he said.

"We got binoculars and were watching him. He was flying real strange, hard banks, real radical flying for a Dash-8," Christenson said.

The plane would plunge toward the water in a nose dive.

Somehow, the plane pulled out of a descent, seemingly just feet from the water.

Later, when he saw a pool of black smoke farther south, "I knew what happened," Christenson said.

"Everybody's stunned … that something like this would happen," Christenson said. "How could it? Everybody's been through background checks."

He said it was difficult to listen to the audio, widely published on news websites, as Russell communicated with an air traffic controller.

"It's chilling listening to this young man. It makes me cringe," Christenson said. "It was hard to sleep last night."

I'm listening through the archive of the radio chatter on the #seatac hijacking. Below are some of the clips. pic.twitter.com/ziBAYv7cgn

Airline and law enforcement officials did not publicly confirm Russell's identity, but provided some details of his background and how he acquired the plane.

"He worked a shift yesterday. We believe he was in uniform," said Brad Tilden, the chief executive officer of Alaska Air Group, which is the parent company to Horizon Air. "It was his job to be around airplanes."

[How could an airport ground crew employee steal and fly an airliner?]

Tilden, speaking at a news conference at Sea-Tac Airport, said Russell had been with the company for nearly four years.

Tilden said the plane was parked at Plane Cargo 1, in the north side of the airport. The plane was not scheduled to fly Friday evening.

"The individual did use a pushback tractor to rotate the aircraft 180 degrees so he could then taxi the aircraft," said Mike Ehl, a Port of Seattle official, confirming that the man did that himself, first driving the tractor and then the plane.

Just after 7:30 p.m., Russell took off. Tilden said the traffic-control tower "did know this was an unauthorized departure."

Horizon CEO Gary Beck said the ground-service agent, who is not believed to have a pilot's license, pulled off some "incredible maneuvers" once airborne. "Commercial aircraft are complex machines," he said. "So I don't know how he achieved the experience that he did."

Authorities believe the crash involved one person. "I think at this time we believe he was the only one in the aircraft. But of course we haven't confirmed that at the crash site," said Jay S. Tabb Jr., the special agent in charge of the FBI's Seattle division.

Asked about Russell's mental state, Tabb said, "It's way too early to comment on that. I'm sorry."

The Pierce County Sheriff's Department on Friday night speculated Russell may have crashed the plane intentionally.

According to sheriff's spokesman Ed Troyer, that theory was based on Russell's recorded conversation with air traffic control and at least one pilot who were trying to talk the man they called "Rich" into a safe landing.

Russell said at one point that he didn't know how to land the plane and "wasn't really planning on landing it." He also apologized to all the people who loved him, who he said would be disappointed with his actions.

The audio recording also seems to indicate that Russell was weighing the consequences of his actions. He said he didn't want to land at Joint Base Lewis-McChord because he was concerned people would "rough" him up there and said, "This is probably like, uh, jail time for life, huh?"

Toward the end of the recording, after he has apparently completed an aerial maneuver, a pilot said, "Congratulations. You did that. Now let's try to land that airplane safely and not hurt anybody on the ground."

Some audio from the exchanges is unclear and provides a murky window into his thinking.

"Think I'm gonna try to do a barrel roll and if that goes good, I'm just going to nose it down and call it a night," he said toward the end of the recorded audio. What he meant by "nose it down" was unclear.

Russell was born in Key West, Florida and moved to Wasilla, Alaska at age 7, according to a blog he apparently maintained through December 2017. Biographical details in the blog posts correspond to information provided by authorities, including the city in which Russell lived, his age and the details of his employment.

The blog also links to social media websites that use the nickname "Beebo" Russell. Biographical information on those sites also correspond to what authorities have shared about Russell.

On the blog, Russell says he met his wife in Coos Bay, Oregon, in 2010 while both were going to school.

They married one year later and one month after that they opened a bakery in Oregon, which they ran successfully for three years.

Russell, who didn't have baking experience, was his wife's apprentice, he told the Coos Bay World for a 2012 article. She told the newspaper Russell was laid-back and liked to tinker with experimental recipes.

Russell was active as a leader in the Christian youth ministry, Young Life.

"He was very, very friendly — automatically willing to bring everyone in. He was very involved in the youth if somebody needed to talk," said Hannah Holmes, now 25. "A lot of the people he was helping were troubled kids."

Holmes said Russell had a penchant for writing, and would sometimes ask her for short story writing prompts.

In 2015, Russell and his wife moved to Washington "because we were both so far removed from our families," he wrote in the blog. " … we settled on Sumner because of its close proximity to her family."

Russell says he got a job working for Horizon Airlines and used his travel benefits to fly up to Alaska. Videos posted on his blog detailed visits to Dublin, Ireland, Misty Fjords National Monument in Alaska, and southeastern France.

"In this season of life we enjoy exploring as much as possible, whether its a day (or so) trip to one of Alaska Airline's destinations, or visiting a new area of Washington. "We consider ourselves bakery connoisseurs and have to try a new one every place we go," he wrote.

At times Friday, it sounded like Russell was sightseeing from the air.

"The sights went by so fast," he said. "I was thinking I would have this moment of serenity. I would be able to take in all the sights. There was a lot of pretty stuff, but, I think they're prettier in a different context."