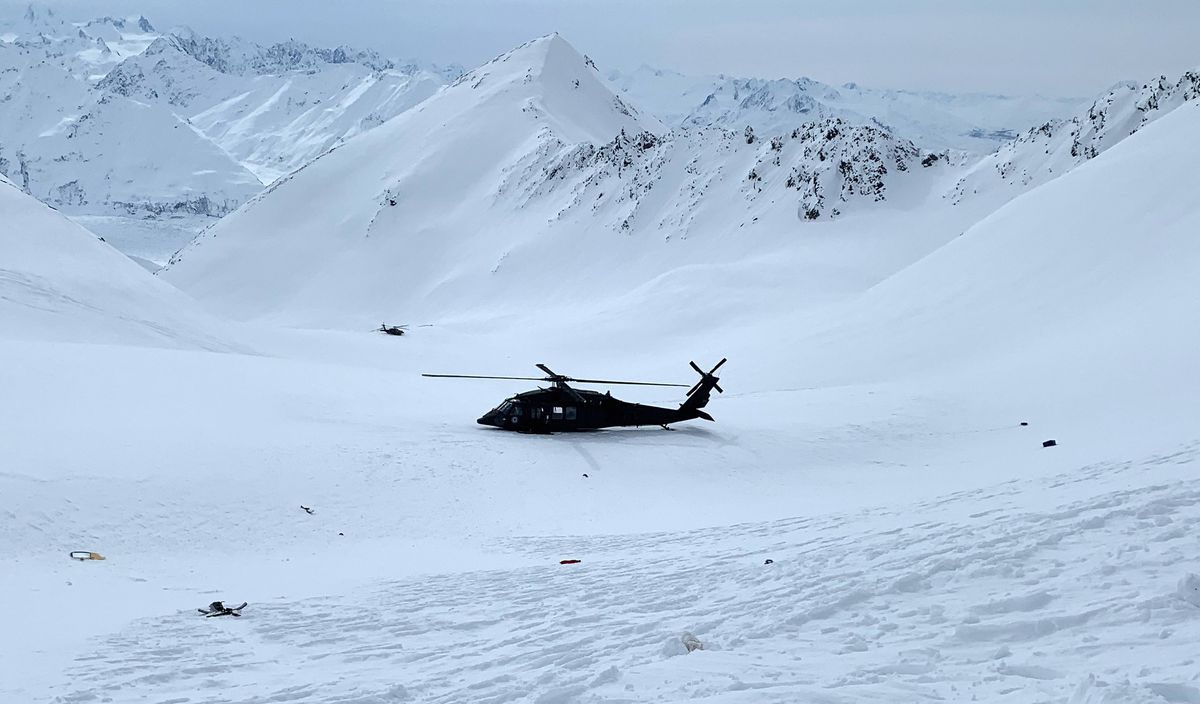 UPDATE, 2:40 p.m. Monday: This story has been updated with a new article: NTSB: Helicopter crash that killed 5 occurred near the top of a high ridge above the Knik Glacier

A contracted helicopter carrying guides and guests from a lodge on a heli-skiing trip in Southcentral Alaska’s backcountry crashed Saturday evening, killing the pilot and four others, including the Czech Republic’s richest man.

The only other person onboard was in serious but stable condition Sunday night at an Anchorage hospital, Alaska State Troopers said.

The five killed in the crash were identified as Gregory Harms, 52, of Colorado; Petr Kellner, 56, and Benjamin Larochaix, 50, both of the Czech Republic; and two Alaskans, Sean McManamy, 38, of Girdwood, and the pilot, Zachary Russell, 33, of Anchorage, troopers said Sunday.

The only survivor of the crash was identified by a Czech media outlet as David Horvath, a 48-year-old Czech snowboarder. Alaska State Troopers did not immediately respond Monday to a request for more information about the survivor. Horvath remained in serious condition at Providence Alaska Medical Center on Monday, a hospital spokesman said.

Kellner was a billionaire businessman and financier with a net worth over $17 billion, according to the Forbes 2020 list of the world’s richest people.

Kellner owned a 98.93% stake in the PPF Group, an international investment company. The group operates in 25 countries in Europe, Asia and North America with assets of $52 billion. PPF Group confirmed Kellner’s death.

“His professional life was known for his incredible work ethic and creativity, but his private life belonged to his family,” a message posted on the PPF Group website said.

The funeral is planned for only close family members, and the company asked the media to respect the privacy of the family.

Kellner and Larochaix “were loyal and frequent” guests at the lodge, Pruitt said in an email to the Associated Press.

Harms was a pioneering heli-ski guide in Alaska and worked for many years at the lodge, Pruitt said. “Greg was one of the most experienced guides in the business,” she said. He also founded a heli-ski company that led trips across the world.

McManamy had been a guide for over 10 years, and was with the lodge for the last five, she said. He was also an avalanche instructor and an experienced mountain guide on Denali, North America’s tallest peak.

Russell was a pilot for Soloy Helicopters, a Wasilla-based company that is contracted by the lodge to provide transportation, Pruitt said.

“This news is devastating to our staff, the community in which we operate and the families of the deceased,” a statement released by the lodge said.

The Eurocopter AS50 crashed at 6:35 p.m. Saturday under unknown circumstances near Knik Glacier, about 50 miles northeast of Anchorage in the Chugach Mountains and about 21 miles southeast of Palmer, said Clint Johnson, chief of the Alaska office of the National Transportation Safety Board, which will investigate the crash.

“The mode we’re in now is to recover the wreckage,” he said. He said the goal was to get the recovery done quickly, before the arrival of a forecasted snowstorm.

Tordrillo Mountain Lodge is about 60 miles northwest of Anchorage. The lodge bills itself as a luxury multisport resort, and offers guided heli-skiing packages through the winter that start at $15,000 per person.

The statement from lodge said this was the first time in its 17 years in business “we’ve had to face an event of this measure.”

Soloy Helicopters has a fleet of 19 helicopters providing charter services primarily in Alaska.

Its website says it provides support to government and industry, specializing in work for seismic oil drilling exploration programs. Soloy Helicopters did not immediately respond to an email to The Associated Press seeking comment Sunday.

Alaska State Troopers said in a statement Sunday that they received a report of an overdue helicopter and the location of possible crash debris Saturday night.

A rescue team from Alaska Rescue Coordination Center was dispatched to the crash site in the area of Knik Glacier just after 10 p.m., troopers wrote. The team arrived to find five occupants dead and a sole survivor, who was taken to a hospital.

The Alaska Army National Guard and volunteers from the Alaska Mountain Rescue Group recovered the bodies from the crash site Sunday and turned them over to the state medical examiner.

A temporary flight restriction placed over the glacier has been lifted, troopers said.

Correction: This article has been updated with the correct spellings of the names of victims Sean McManamy and Zachary Russell.