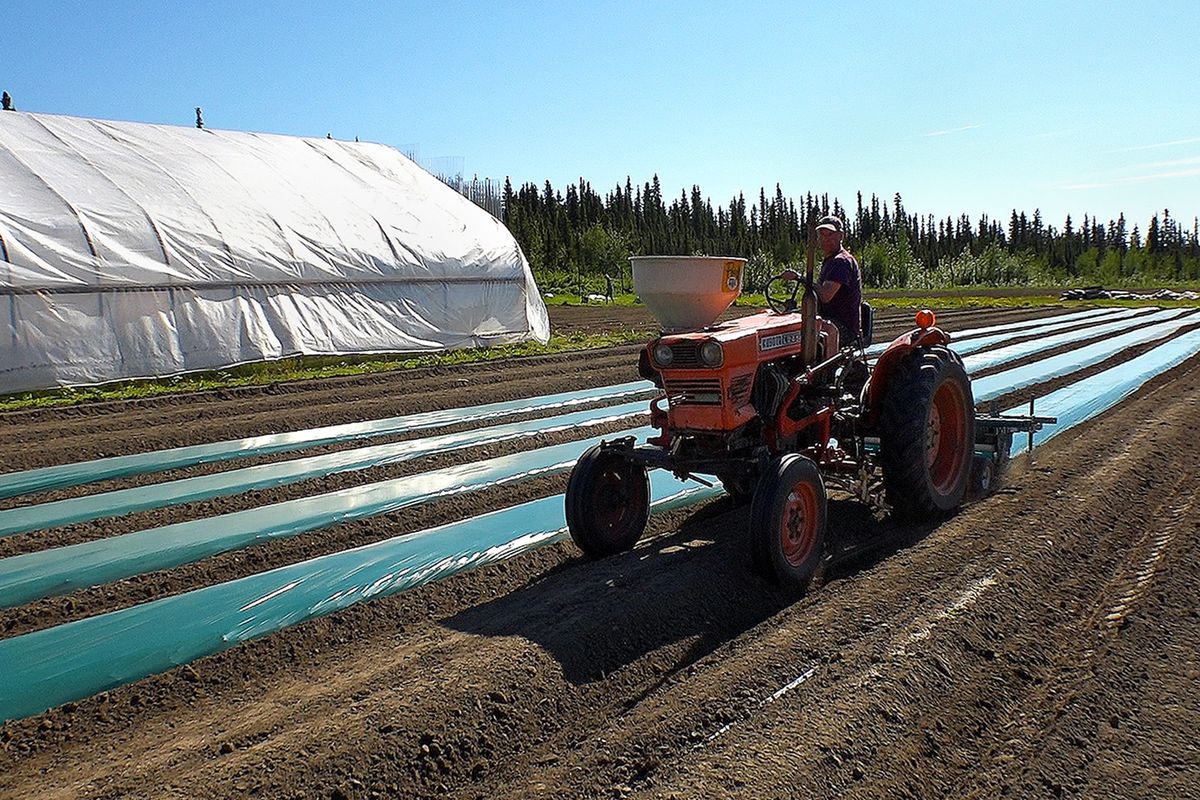 Rosie Creek Farm owner Mike Emers lays down plastic mulch in preparation for growing strawberries on May 30, 2016. Emers has applied to the state for a marijuana cultivation license. He intends to grow cannabis outdoors alongside his regular crops. (Scott Jensen / Alaska Dispatch News)

Rosie Creek Farm owner Mike Emers lays down plastic mulch in preparation for growing strawberries on May 30, 2016. Emers has applied to the state for a marijuana cultivation license. He intends to grow cannabis outdoors alongside his regular crops. (Scott Jensen / Alaska Dispatch News)

FAIRBANKS — On a warm, cloudless Memorial Day, Mike Emers surveyed his domain at Rosie Creek Farm. Emers has owned the family farm for 16 years, a spacious plot cut from the Interior Alaska wilderness. It was the last day the farm would exist in its current iteration. After that, its transformation to a cannabis growing facility would begin.

The next day, an 8-foot fence went up around the perimeter, satisfying part of the state's security requirements for the new legal marijuana industry.

Perhaps as important for Emers, the fence will keep moose out of the potentially lucrative cannabis crop.

"I'm going to plant them like broccoli," Emers said, standing in front of the 1.5 acres of tilled land where he plans to grow cannabis. He says he'll plant thousands of the plants in large high tunnels.

Emers is one of 33 growers who have gotten a zoning permit from the Fairbanks North Star Borough.

All told, the borough has approved 47 zoning permits, with another 5 pending. Ten of those are retail stores; four are manufacturing facilities. The rest are cultivation facilities.

"We've had a lot of interest from the very beginning," Christine Nelson, the borough's community planning director, said of the fledgling industry.

For decades, Emers' "bread and butter" has been salad mixes, and he says he'll never stop growing vegetables.

But cash is tight. Emers hopes cannabis will inject new revenue into the business.

"I would say it's a matter of survival for this farm," Emers said.

Thursday, June 9, is a big day for Emers. He'll travel to Anchorage for the Marijuana Control Board's meeting, where the state's very first commercial growers and testing facilities will be approved — or rejected. He's second on the list of 18 growers hoping to be approved.

Then Emers will return to Fairbanks. That same evening, he'll stand before the Fairbanks North Star Borough, which will also vote to approve or protest his business. He's one of 5 marijuana businesses on the borough's Thursday agenda.

Unlike Juneau or Anchorage, the Fairbanks North Star Borough doesn't require a separate marijuana business license. Businesses get zoning permits, go through the state license process, get a stamp of approval from the borough Assembly, and then have a final site inspection from the state.

By contrast, Anchorage has its own marijuana business license and special use land permit. Canna-businesses must hold a meeting with nearby property owners to start the process, said Erika McConnell, special assistant to the director of the city Office of Economic and Community Development.

Their state application must be complete before the ball can get rolling at the local level; Anchorage is currently processing three marijuana business applications, said Francis McLaughlin, senior planner at the city Planning Department.

The first Anchorage Assembly approvals won't be finished until the end of July, McConnell said, so any Anchorage cultivators approved by the state on June 9 won't be able to start up for at least six more weeks.

As for Emers, when he'll be able to put plants in the ground is not fully clear, as he will still need a final inspection from Alcohol and Marijuana Control Office staff before being licensed. But he's not waiting to get the facility set up, as every day the growing season shortens.

On the same day Emers was taking a last look at his farm before its transition, father-son duo Keenan and Cole Hollister were busily preparing for the start of their indoor cultivation center in an industrial pocket off Phillips Field Road.

Along with business partner Walker Milliken, the Hollisters hope to start a grow and a retail store that will include a marijuana café, where people are allowed to consume marijuana. Alaska is the only state with such a provision, and the Hollisters see that as a great opportunity.

"I think it's going to bring in the tourism," Keenan said.

In the coming weeks, they hope their warehouse will be outfitted with multiple grow rooms; hundreds of plants will fill the space that is now vacant and scattered with construction equipment.

The warehouse used to be a Hostess Brands distribution center, and the two joke about the irony of cannabis, known for giving people the munchies, growing where junk food was once stored.

"It is kind of amusing that Twinkies used to be sold here," Keenan said.

The warehouse is inside Fairbanks city limits and the Hollisters had more hoops to jump through than if they had found space in the wider borough. All the remodeling has to be permitted, Keenan said, and they will be subject to the city's 5 percent marijuana sales tax.

The Hollisters say it's worth it, though, for the space they've found. The city council fast-tracked their application, and on Tuesday they were approved pending a certificate of occupancy.

"Fairbanks has been pretty positive, so we're a good six months ahead of the rest of the state," Cole said.

Like Emers, the Hollisters are slated for both state and borough approval on Thursday.

After that, "multitudes of loose ends" still need to be tied up, Cole said. Still, years of planning are coming together.

"Yeah, it's getting a little too real," Cole joked.

As businesses scramble to prepare for their first-ever legal grows, the economic impact is still a question mark.

Not everyone in the borough is happy about the new industry; a Salcha man has applied to start a petition that would put the question of banning commercial marijuana on the Oct. 4 ballot, the Fairbanks Daily News-Miner reported.

Nelson said a ban is unlikely. "That sentiment is out there in certain quarters and certain areas, but as a community consensus, no."

In 2014, 56.5 percent of voters in the Fairbanks North Star Borough favored marijuana legalization, higher than the statewide total. Nearly every precinct voted in favor of legalization, the News-Miner reported at the time.

"In terms of local communities being receptive to the industry, Houston (in Southcentral) is by far the top of the list … and then I think Fairbanks is a very close second," said Marijuana Control Board chair Bruce Schulte.

Houston is the only town in the Matanuska-Susitna Borough that has touted commercialization as a way to increase much-needed revenue.

But that borough, long known informally as the marijuana growing capital of Alaska, is under a temporary moratorium for commercial marijuana, pending a vote to ban commercialization in October.

In the Kenai Peninsula Borough, there's movement too. On June 21, the borough will hear from nine marijuana businesses, said Paul Ostrander, chief of staff to the borough mayor.

Elsewhere, the city and borough of Juneau has also accepted five zoning permits, with one more up for approval at the end of the month, city planner Christine Steadman said.

Despite the potential upside, for Emers, the decision to begin a cannabis business does come with some drawbacks. His children, who have grown up on the farm, will no longer be allowed inside the fencing under state law.

His son is upset at being locked out of the farm, Emers said, but "it might send him to college also."

Cannabis gives the "potential to run the farm the way it should be run and not just duct tape holding everything together," Emers said. "We're really grateful for the opportunity."