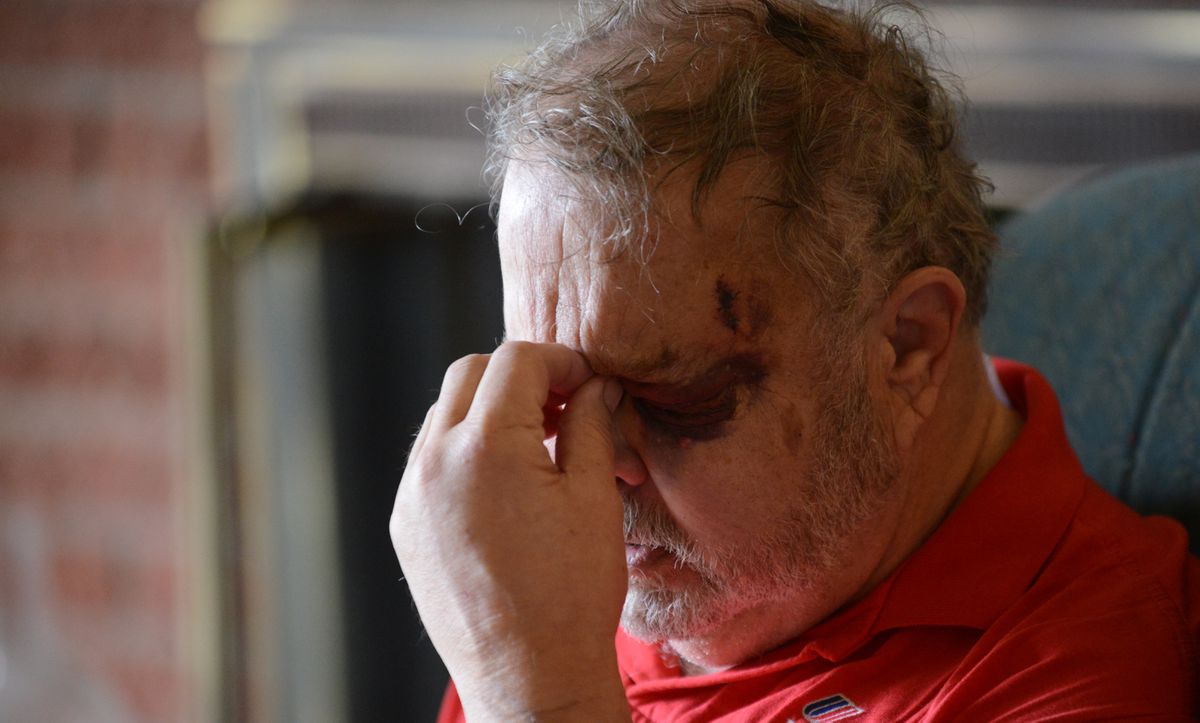 Wesley Demarest talks two weeks ago about how an intruder attacked him with a hammer in his Spenard home. (Bob Hallinen / Alaska Dispatch News)

Wesley Demarest talks two weeks ago about how an intruder attacked him with a hammer in his Spenard home. (Bob Hallinen / Alaska Dispatch News)

Jason Vukovich, 41, waived his appearance at a court hearing Thursday in an unusual criminal case: the hammer attack he's charged with carrying out against a man on a sex-offender list.

While police and prosecutors won't go into details, the victim of the attack, Wesley Demarest, said Vukovich is the man who broke into his Anchorage home in late June and, wielding a hammer, called himself the "avenging angel" for hurting children.

According to a charging document accusing him of assault and burglary, and signed by Assistant District Attorney Patrick McKay, Vukovich told Demarest to get down on his knees and lay on his bed. When Demarest refused, Vukovich hit him on the head with a hammer, knocking him unconscious.

"I didn't feel I deserved it, but I guess I do. I guess my punishment isn't over yet," Demarest, 67, said in an interview earlier this month, recounting the night of the June attack as he sat in his cluttered living room, his left eye swollen shut, numerous staples in his head, a broken right thumb, multiple concussions and a fractured skull.

Demarest said the intruder had broken into his Spenard home in the early morning of June 29, using a hammer to smash a narrow window in the entryway, near where his roommate sleeps. Demarest said he slept through the noises of the breaking glass, but his roommate heard it and got up.

"It's 1 o'clock in the morning, my roommate came pounding on my door and said, 'Someone is trying to break in,'" Demarest said. "And a guy was standing behind him and pushed him out of the way and he was carrying a hammer."

Demarest said the intruder asked if he was a registered sex offender and if he was Wesley Demarest. Demarest said he answered "Yes." He also noted the man wore two or three necklaces and had a hat pulled over his long, straight hair.

The intruder talked about a list he had in his car with the names of other registered sex offenders, Demarest said.

Anchorage District Attorney Clint Campion declined to comment on whether Demarest was targeted because he was listed on the state's public sex offender registry or any list of names.

The charges make no mention of those details and the Anchorage Police Department said earlier this month it wouldn't comment on the case because the investigation is ongoing.

Demarest said the intruder kept demanding he lie down, then started hitting him. Demarest, dressed only in his underwear, said he had nothing to protect him. He said he may have tried to hit back before the hammer slammed into his head and knocked him unconscious.

The next thing he remembered was waking up, slumped on the ground in a pool of blood. His attacker was gone. His roommate had called 911.

According to the charges, Demarest was hit four or five times in the head with the hammer. Police responded to his home on Lake Spenard Road around 1:30 a.m. on June 29 in response to a report of an assault and burglary.

APD said officers soon found a car belonging to Vukovich near the corner of Lake Spenard Drive and Wisconsin Street. He was arrested.

On Thursday, Vukovich's preindictment hearing was scheduled at the Nesbett Courthouse downtown. Vukovich's public defender, Chong Yim, said his client had decided to waive his right to appear in court and asked that the hearing be continued to July 28.

Yim declined to comment about the case, including whether Vukovich targeted Demarest because he appeared on the sex offender registry.

By Friday, about two weeks after the attack, Vukovich remained in the Anchorage jail awaiting his next court appearance. Demarest was still going to the doctor's office and treating his wounds.

Demarest said he had not returned to work. He has a job delivering motor parts, and volunteers at a local church, a place where he said he's told people about his sex crime.

In 2006, Demarest was convicted of attempted sexual abuse of a minor. The girl was in kindergarten, according to charges. Demarest said he served nine months in jail and went to a sex offender treatment program for three years.

"All I've been doing for 11 years has been regretting every moment of my crime, and not a day has gone by that I don't think about it," he said.

About the June 29 attack, he said, "Mentally, I'm still baffled."