With Valley of the Moon slayings, 2016 is already one of Anchorage's deadliest years 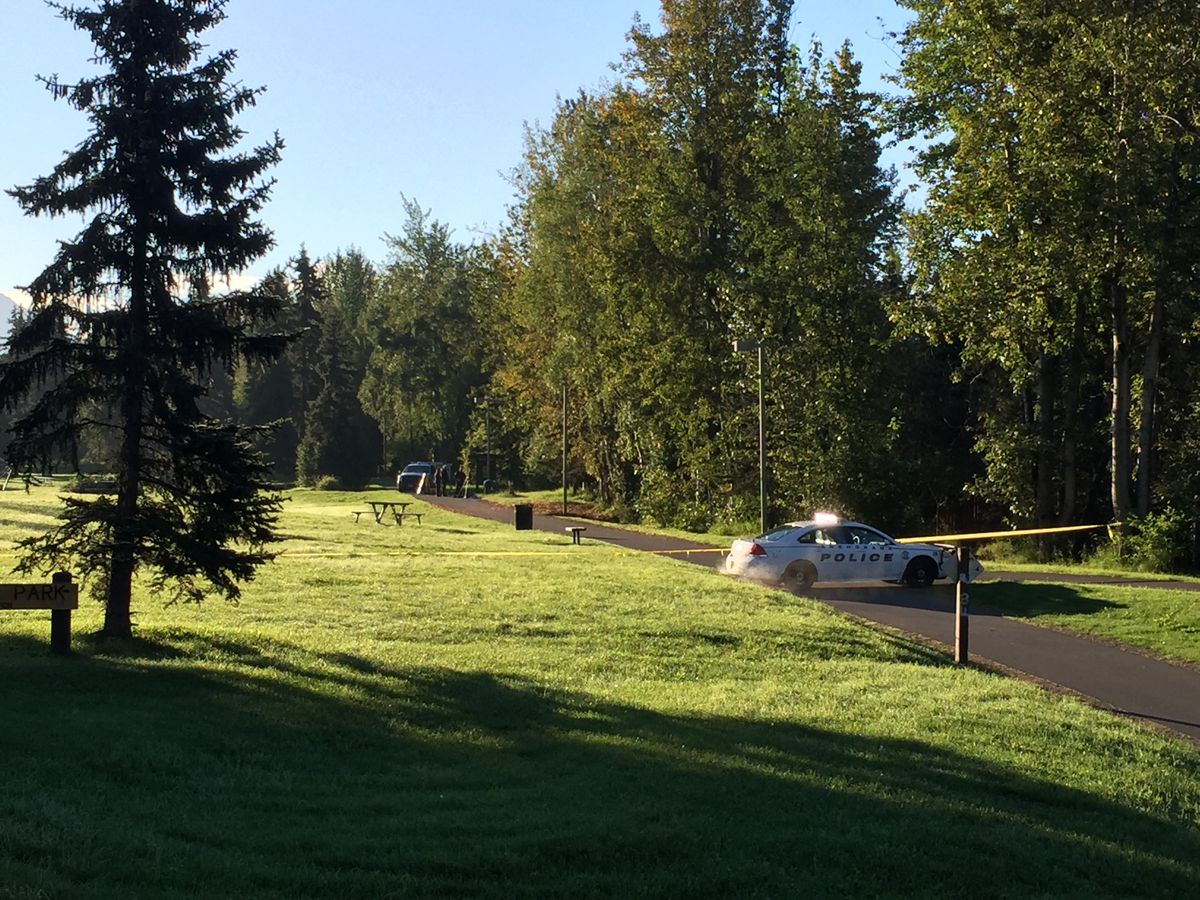 Anchorage police investigate the scene of what they described as two homicides at Valley of the Moon Park on Aug. 28, 2016. (Ben Anderson / Alaska Dispatch News)

Anchorage police investigate the scene of what they described as two homicides at Valley of the Moon Park on Aug. 28, 2016. (Ben Anderson / Alaska Dispatch News)

Two men were found dead along the Chester Creek Trail in Anchorage's Valley of the Moon Park early Sunday morning in what appeared to be a double homicide, according to Anchorage police.

By Sunday evening, police had not released the identities of the victims or the manner in which they died. But the killings — the 24th and 25th of the year — had already made 2016 one of the deadliest years in decades, with four months left on the calendar.

Police are releasing scant details of Sunday's slayings during the early stages of the investigation, said Sgt. Slawomir Markiewicz, a homicide detective with the Anchorage Police Department.

Officers responding to a citizen call just before 2 a.m. first found a man dead on the bike path and then a second man dead nearby, police said in a statement. Markiewicz would not say how the victims are believed to have died. An autopsy was scheduled for Monday.

Some neighbors reported hearing overnight gunshots on NextDoor, a neighborhood social network, said Richard Clement, who lives just across the creek from where the bodies were found.

Around 8 a.m. Sunday, crime scene tape still stretched around the perimeter of the park, located on West 17th Avenue between Arctic Boulevard and E Street. A group of police officers and a white State Medical Examiner Office vehicle were clustered near the bike path between a covered pavilion filled with picnic tables and the "rocket ship" playground equipment that makes the park a draw for families and children's birthday parties.

Four officers picked up a body on a stretcher from the bike trail and loaded it into the medical examiner's vehicle.

There were no immediate indications of where the other body was discovered. At least four yellow evidence markers could be seen on the ground and picnic tables beneath the pavilion, which serves as a barbecue spot on sunny summer days like Sunday.

Around 8:45 a.m., an Anchorage Fire Department engine arrived, and crews stretched out a fire hose from the parking lot to the pavilion. As they hosed down one of the picnic tables, the water pouring off of it turned a bright red.

A half-hour later, members of the Anchorage Police Department Search Team arrived, unloading metal detectors from vehicles before setting off in the direction of Chester Creek. A police officer wheeled a blue bicycle up to the mobile crime scene van.

The picnic tables had been removed from the pavilion, resting on the grass outside. Bikers and walkers stopped at the yellow crime scene tape to look.

By Sunday afternoon, any trace of the slayings had been scrubbed from the park, which was again crowded with toddlers, parents, bicyclists and others enjoying the warm, sunny afternoon.

Tina Su'e sat with two friends at the same picnic tables that had earlier been hosed down by firefighters. She and a few friends were relaxing after the end of recreational cricket season. They had not heard about the killings in the park.

Su'e said she was shocked.

"Here? Right here?" she said. "From what I read in the news, things seem like they're really getting bad in Anchorage these days."

With 25 homicides, 2016 has already tied the number of killings last year, not counting officer-involved shootings. Anchorage also saw 25 homicides in 1996, according to the FBI's Uniform Crime Reporting database. The year before, 1995, there were 29 killings.

This summer has been an especially violent one in the city. There have been 15 homicides in Anchorage over the past two months and two days: one on June 27, nine in July and five in August so far, according to an APD tally.

There have also been four double homicides with a total of eight victims in 2016: A mother and daughter killed in their home in January, then the killings of a young man and woman at Point Woronzof, also in January. Two more people were found dead on a Ship Creek bike path in July, and now the deaths at the park. Only in the case of the mother and daughter has a suspect been arrested.

What's behind the surge in violence? That's not clear, said Markiewicz. In his decades of experience investigating homicides, they ebb and flow. He said he didn't see any trend or clear reason for the rise in homicides. Some have involved domestic violence, others personal disputes. Nine of the 15 homicide investigations this summer have led to an arrest, he said. Police are actively investigating the rest, he said.

"I want the public to know we are doing our best," he said Sunday afternoon. "We have had a team of detectives here since 2 a.m., and will continue to work."

In this case, "there are more questions than answers," Markiewicz said.

Ben Anderson contributed to this report.