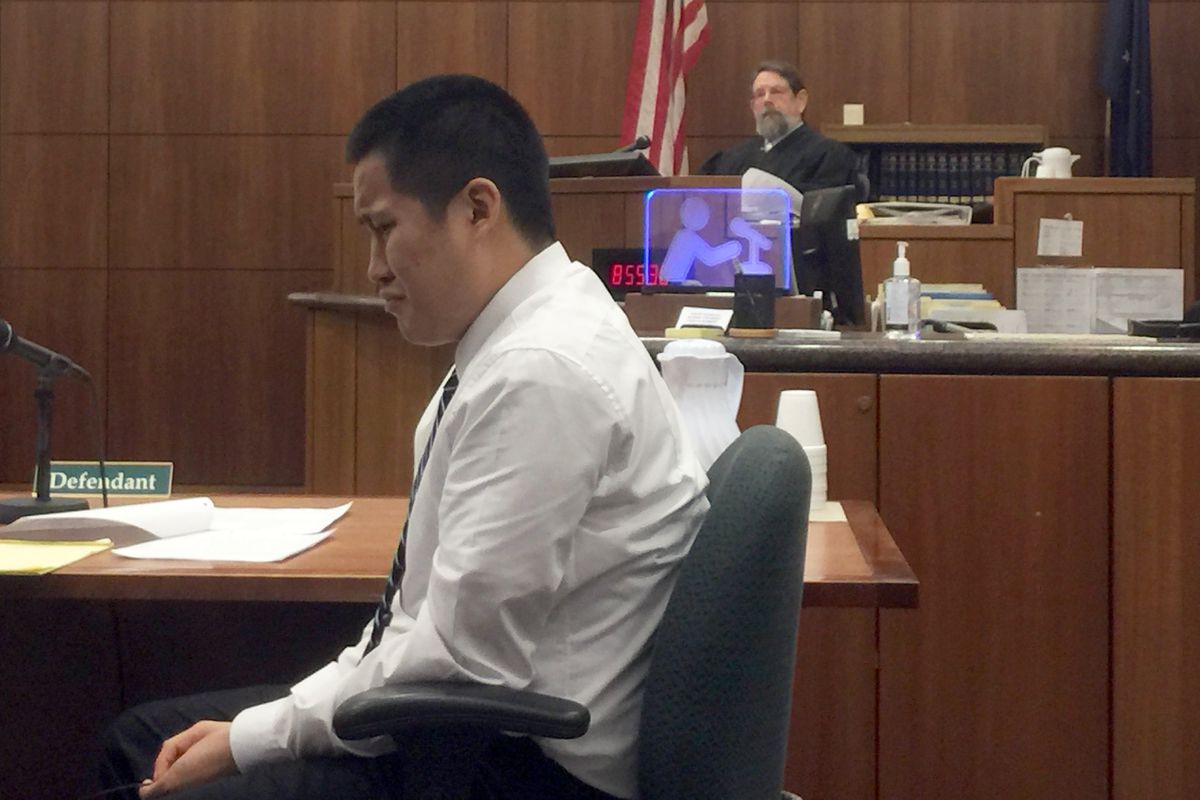 Arnold Demoski quietly sobs as Aliy Zirkle speaks about the need to understand the value of life during his change of plea hearing Monday, Dec. 19, 2016, in Fairbanks.  (Dermot Cole / Alaska Dispatch News)

Arnold Demoski quietly sobs as Aliy Zirkle speaks about the need to understand the value of life during his change of plea hearing Monday, Dec. 19, 2016, in Fairbanks.  (Dermot Cole / Alaska Dispatch News)

FAIRBANKS — Arnold Demoski, 27, tearfully apologized to Iditarod mushers Aliy Zirkle and Jeff King as he entered a guilty plea Monday under which he will be required to pay restitution of more than $36,697 for aiming his snowmachine at their dog teams during the race last March.

Under the plea agreement, Demoski also received a sentence of six months and three days in jail. He has about a month remaining to serve, District Attorney Gregg Olson said after the hearing before Superior Court Judge Michael McConahy.

Olson said that had this sentencing taken place before the changes in the criminal law brought last summer by the passage of Senate Bill 91, he would have been asking for up to two years in jail.

Early on the morning of March 12, as the Iditarod leaders approached the Yukon River village of Nulato, Demoski aimed his snowmachine at King's and Zirkle's teams in separate incidents, according to reports at the time.

Demoski apologized in an interview later that day and said he had blacked out from drinking and didn't remember the details.

He hit King's team, killing one dog and injuring others. Zirkle reported that Demoski made repeated runs at her team, putting her in fear for her life. She said that no amount of restitution could ever make her feel the way she did before the terror of that night.

"When he treated my life like garbage, that was a really big crime," she told the court. She said she hoped that a sentence for Demoski would be sufficient to allow him to learn that "most people think life is valuable."

Olson said after hitting King's team with enough force to knock the cowling off the snowmachine, Demoski drove off into the night.

Olson said that Zirkle's sled tipped over as Demoski made repeated runs close to her team some 15 miles from Nulato, and she thought she was going to die.

"I think it would be fair to say that from her view, he terrorized her," Olson said.

The restitution agreement includes $26,159 for King, who lost a dog and had others injured, and the balance for Zirkle.

Speaking by phone, King told the court he was hit by a snowmachine that was worth more than $10,000 and the first offer from the defense was less than that amount, leading him to stick to $26,000, which he said is a "break-even proposition" and does not take into account the challenges, suffering and emotional hardship inflicted on Nulato, Zirkle and the people in the Iditarod.

Demoski said Monday he has been sober since the attacks on King and Zirkle and gone through a rehabilitation program.

"I have the deepest sympathy for Mr. King and Ms. Zirkle," he said, sobbing. "I am truly sorry from the bottom of my heart for what happened."

"I hope they can find it in their hearts to forgive me someday. I hope they will allow me to speak to them one day and apologize," he said.

He said the attacks were a "big mistake" and a result of his bad decisions. He also said he felt bad for the dogs that were hurt, especially 3-year-old Nash, who died after being hit by the snowmachine.

Demoski entered a guilty plea to criminal mischief in the third degree, fourth-degree assault, reckless endangerment and drunk driving. The agreement includes up to five years of probation and a $5,000 fine for DUI, with $3,500 suspended.

Demoski is the natural resources coordinator for the Nulato Tribal Council. He has two young sons, one of them born after the incidents with the mushers. He plans to be married after the case is concluded.

"Alcohol is not an excuse, but it fueled this behavior," said defense attorney Geoffry Wildridge, adding that Demoski entered residential alcohol treatment as quickly as he could and completed it successfully.

His life is full of promise and Demoski is capable of redemption, Wildridge said, though he knows he has to earn his way back. He said it is significant that Demoski had told others before the race about how much he liked the event and that his favorite musher was King.

Judge McConahy asked Demoski what he was trying to do that night and why. Demoski said he did not remember.

During grand jury proceedings, King testified that there is a history of heavy alcohol consumption in the community during the race and "mushers view themselves as targets on the trail," according to Wildridge.

McConahy said that perhaps the "most chilling" aspect of this for Zirkle may have been that Demoski parked his snowmachine in front of her dog team and circled her team and raced away, leaving her in fear for her life.