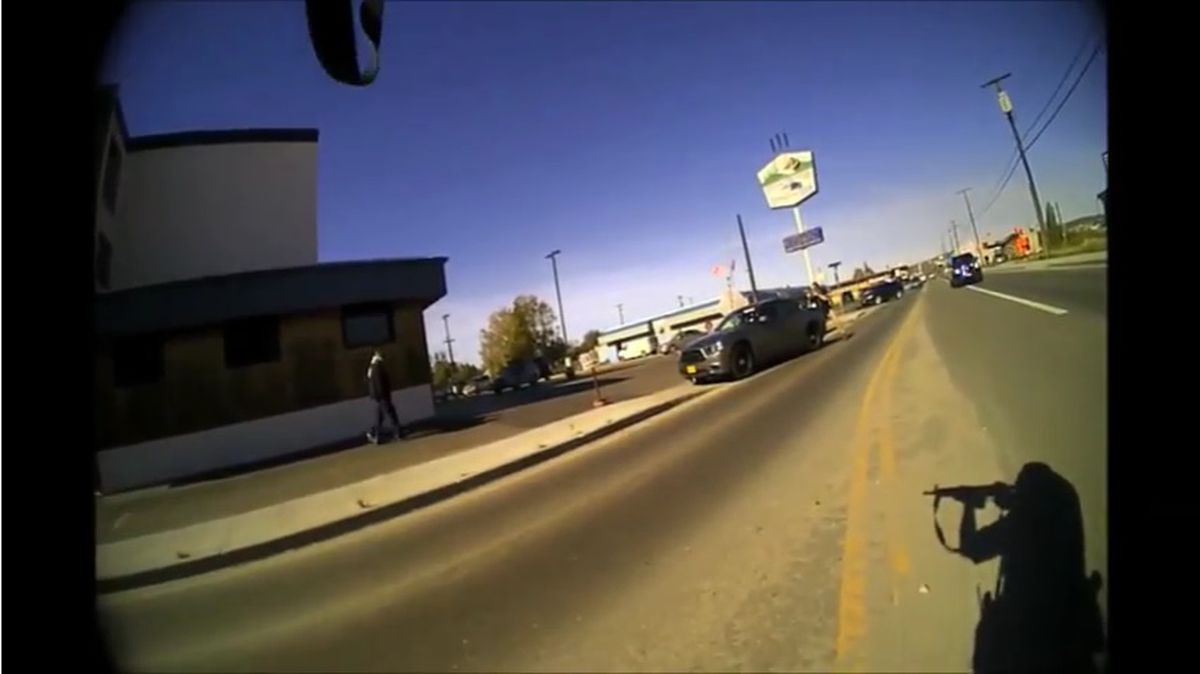 James Robert Richards, 28 (in white shirt), walks next to, and is shielded by, Solomon Roberts (in black shirt) in a Fairbanks police body-camera video on Aug. 30, 2016, moments before he was fatally shot by police Sgt. Gregory Foster (behind the sedan at center). (From FPD YouTube channel)

James Robert Richards, 28 (in white shirt), walks next to, and is shielded by, Solomon Roberts (in black shirt) in a Fairbanks police body-camera video on Aug. 30, 2016, moments before he was fatally shot by police Sgt. Gregory Foster (behind the sedan at center). (From FPD YouTube channel)

A Fairbanks Police Department sergeant's fatal shooting of a suspect last year has been deemed justified under Alaska law by state prosecutors.

Police held a press conference Friday morning to announce results of the state Office of Special Prosecutions' review of the Aug. 30 shooting, in which 28-year-old James Robert Richards was shot by FPD Sgt. Gregory Foster.

In a letter to FPD Chief Eric Jewkes, Assistant Attorney General Robert Henderson says criminal charges against Foster are "not appropriate" in the case.

According to the letter from Henderson, Richards burst into a room at the Alaska Motel at 1546 S. Cushman St. holding a pistol, demanding drugs and money from the occupants. Two of them were pistol-whipped, leading to a struggle in which the gun was fired but no one was hit, Henderson wrote; three people were later hospitalized from the incident.

During Friday's presentation, Jewkes played dashboard camera video from Foster's police cruiser as he drove to the incident, which was reported at about 1:40 p.m. Aug. 30. In the video, dispatchers can be heard alerting all FPD units to a call involving "a suspect with a gun pointing it at a female" at the motel, adding that shots have been fired and that Richards "fired once at the caller."

Four FPD officers initially responded to the call, confronting Richards near Cushman and 15th Avenue. A body camera video from one of them, officer Dave Elzey, shows Richards – wearing a white T-shirt and dark pants – walking away from police on a looping path through the area as they order him to stop.

During the body-camera video clip played Friday, Jewkes said officers instructed Richards a total of 55 times to put down his gun, lie down or otherwise reduce his threat level.

Police twice tried to use a Taser on Richards shortly before he was shot, Henderson wrote, but the first attempt missed; the second made contact but wasn't effective.

Jewkes, however, said that Richards physically maneuvered Roberts so that he was between Richards and officers.

"To do that, he has to push Solomon Roberts, move him by the arm, and switch the gun to his other hand," Jewkes said.

Henderson said Foster got out of his patrol car close to Airport Way and South Cushman, near the front of the Prospector, retrieving his duty rifle from the vehicle. The video from Foster's dashboard camera shows him firing on Richards, who is off-camera, about 30 seconds after the vehicle comes to a stop.

Playback of Elzey's body-camera video stops at the moment the shots are fired, Jewkes said, to "show respect to Mr. Richards as a human being, and his family."

Police recovered a 9mm pistol at the scene. An autopsy determined that Richards had a blood-alcohol content of 0.122, as well as methamphetamines and marijuana in his system, Henderson wrote.

Henderson said Friday that Richards' death was not the first fatal officer-involved shooting in Alaska to be captured on a body camera. North Slope Borough police officers were wearing cameras in February 2016, he said, when they shot and killed borough fire Chief Vincent Nageak III after they say he pointed a shotgun at one of them during a domestic-disturbance call.

Alaska State Troopers investigated the Nageak shooting, and a deadly-force review by the Office of Special Prosecutions determined the police sergeant who fired his weapon was legally justified in doing so.

Law enforcement officers were also found justified and avoided criminal charges in the fatal shootings of Tristan Vent, 19, who was shot by four troopers during a traffic stop in Fairbanks on Sept. 6, 2016; and Herman Bean Jr., 49, whom two Anchorage police officers shot and killed on Jan. 12, 2016, when Bean charged them with a knife.

Henderson said there are two officer-involved shootings under investigation. In December, Brian Tupper, 37, was wanted on felony warrants when he drove a vehicle toward arresting officers; four troopers shot him. And a week ago, troopers shot and killed 35-year-old Jean R. Valescot after an hours-long standoff in the Big Lake area.

The Office of Special Prosecutions is currently reviewing a single non-fatal officer-involved shooting, Henderson said. A trooper fired at 38-year-old Mary Tilden when she allegedly tried to run the officer over during a car chase near Dillingham in November.

Prosecutors assess officer-involved shootings in Alaska under an overall standard of "objectively reasonable" conduct, Henderson said, but part of that assessment involves officers' perceptions of an incident.

"There's also a subjective component: Was the officer's conduct subjectively reasonable, based on the totality of the observable circumstances?" Henderson said.

Based on the situation Foster encountered when he arrived, Henderson found the conclusion that Roberts was being used as a human shield reasonable.

"Sgt. Foster's belief that deadly force was necessary in this situation is equally reasonable," Henderson wrote. "At the time Mr. Richards took control of Mr. Roberts and began escorting him away, Sgt. Foster knew that Mr. Richards had likely recently fired his gun inside the Alaska Motel, two individuals had been injured, and that he was still armed."

FPD spokeswoman Yumi McCulloch said Friday that the department will conduct an internal review of the shooting, which was pending the result of the Office of Special Prosecutions' findings.

"We want to get it done as quickly as possible, because we want to move on from the incident," McCulloch said.

Henderson said the special prosecutions office is consulted about the release of police body camera footage, but the decision falls upon the involved law enforcement agency and a department tasked with investigating incidents, which, sometimes, are one and the same.

"It's a case-by-case analysis done under the public records statute," he said. "One of the questions we asked (in the review of the Richards shooting), among others, is will the release of the video interfere with potential investigative tactics or further adjudicative proceedings."