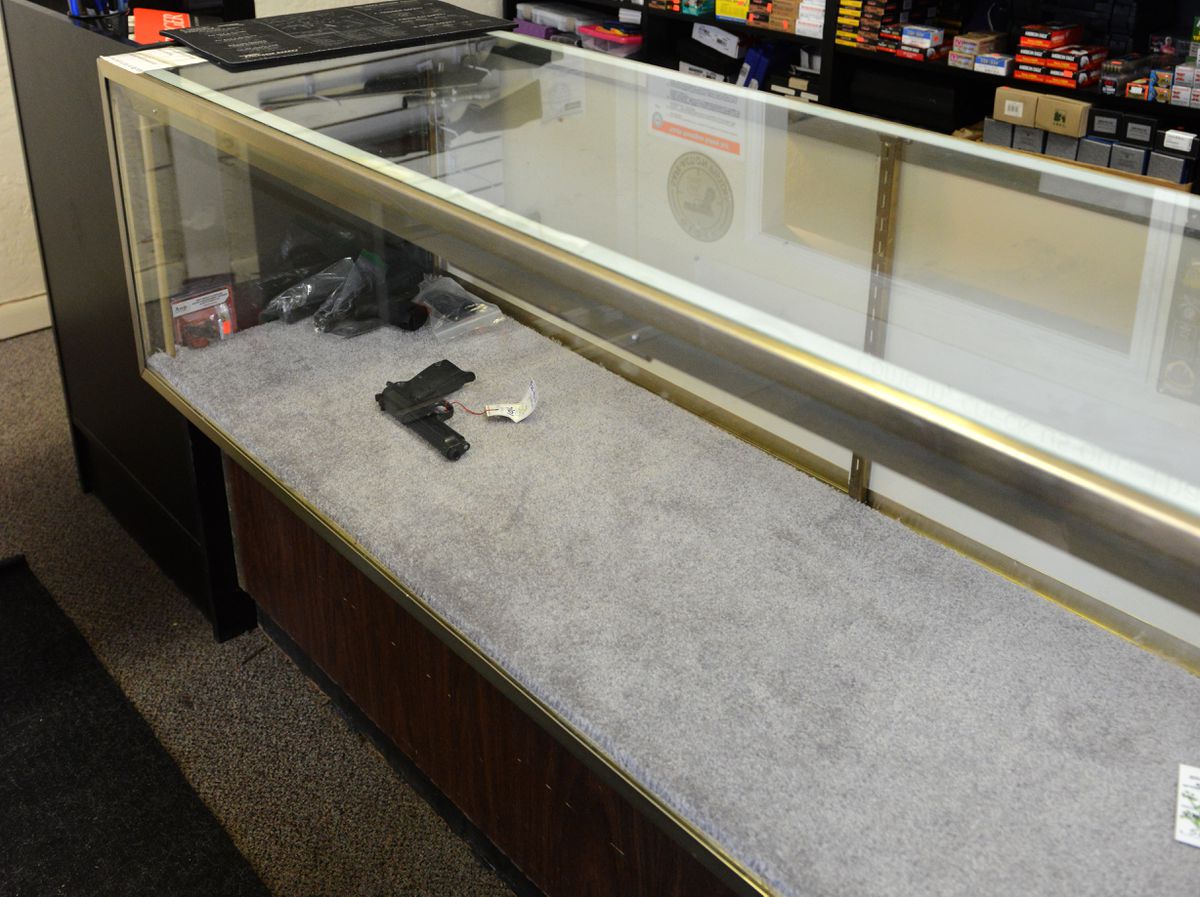 Update, 1 p.m. Sept. 14: Anchorage police have arrested one of the two men accused of breaking into a local knife and gun shop and stealing 36 firearms.

Original story: Anchorage police are searching for two men who they say broke into a local knife and gun shop early Thursday and walked out with 36 firearms.

Police spokesman MJ Thim said the men shattered the shop's front door to get inside. The shop, EDC Alaska, is tucked into a strip mall on East Northern Lights Boulevard, across the street from The Mall at Sears.

"We got the alert because the security alarm was going off," Thim said. "When we got there the glass to the main doors was broken and shattered."

Police believe the burglary happened around 6:50 a.m. Thursday. The Bureau of Alcohol, Tobacco, Firearms and Explosives is the lead agency on the investigation, Thim said. He said police were working with ATF on Thursday to gather surveillance footage and suspect descriptions.

Thim said he was not briefed on the burglary until Friday and investigators told him they had enough information and wanted to put it out to the public.

Police sent out a public alert about the burglaries, including suspect descriptions and photos from surveillance footage, around 4 p.m. Friday.

At EDC Alaska on Friday evening, Juan Cruzaley-Phillips, the shop owner, stood next to a nearly empty glass case. He said the burglars had stolen two shotguns, a rifle, a revolver, 32 pistols and four knives. In total, the items taken were worth roughly $30,000, he said.

Our shop was broken in to this morning, please be on the look out for these guns. If you know people who work at pawn shops, let them know these are stolen guns. Thanks Juan and Suzzy

Cruzaley-Phillips said when the burglars broke in, they triggered the motion sensor on the security system.

Police said both suspects wore gloves and had the lower parts of their faces covered. One wore jeans, gray or black shoes and a black hooded jacket "with an unidentified reflective emblem or logo on the left chest." The other suspect wore a baseball-type hat, a red bandana covering the lower part of his face, gray sweatpants, a black hooded jacket and brown boots, according to police.

The suspects drove away in a dark-colored pickup.

Police said ATF and the National Shooting Sports Foundation are offering a reward of up to $10,000 for information in the case.

They asked anyone with information to call APD Dispatch at 907-786-8900 and press "0" to speak with an operator. To remain anonymous, contact Crime Stoppers at 907-561-STOP or online at anchoragecrimestoppers.com. People can also contact ATF at 888-ATF-TIPS.