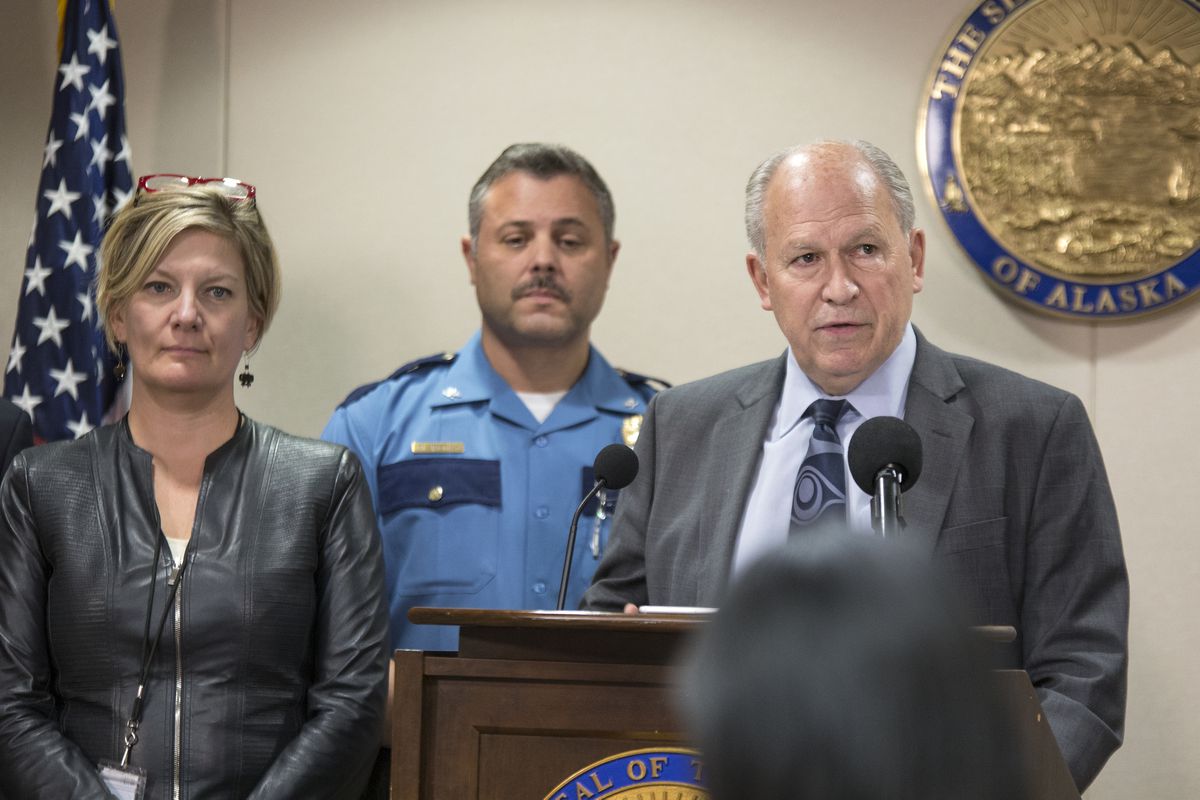 Gov. Bill Walker speaks with Attorney General Jahna Lindemuth, left, at his side during a news conference at the Atwood Building in Anchorage on Friday. (Rugile Kaladyte / Alaska Dispatch News)

Gov. Bill Walker speaks with Attorney General Jahna Lindemuth, left, at his side during a news conference at the Atwood Building in Anchorage on Friday. (Rugile Kaladyte / Alaska Dispatch News)

Elected officials across the state are confronting a public backlash against the legislation, often called by its 2016 bill number, Senate Bill 91. State data showing an uptick in crime has been fueling the criticism.

But that rise, in most categories, started before the passage of the criminal justice legislation, and supporters of the broad reform say other causes are driving the trend, including addictive opioid painkillers and a budget crisis that's forced sharp cuts to misdemeanor prosecutions.

Walker, flanked by a pair of blue-shirted state troopers at an Anchorage news conference, said he's not sure how much blame to assign to the criminal justice bill. But there's no question crime is up, he said, adding: "More needs to be done. There's no question about it."

"We can't wait until next year," he said.

Walker's term is up next year, and he's running for re-election; Anchorage Mayor Ethan Berkowitz has also faced criticism this week for his response to a shooting in which three men died.

But one of the architects of the criminal justice reform bill, former Anchorage state Sen. Johnny Ellis, cautioned lawmakers against a "knee-jerk reaction" tied to the impending election.

"There's always a response from elected officials to find an easy solution or an easy scapegoat. That's not what's called for in this situation," Ellis said in a phone interview. "We don't want to make major changes based on emotion."

SB 91 passed last year with bipartisan support in the House and Senate — though not without vocal opposition from some victims advocates and police officials.

The bipartisan bill's two main sponsors — Ellis and North Pole Republican Sen. John Coghill, one of the Senate's most conservative members — argued pushing for passage that the state's previous tough-on-crime approach was proving unaffordable amid the state budget crisis.

It also wasn't effective in deterring people from committing crimes, with research by the Pew Charitable Trusts showing that longer prison stays didn't reduce the likelihood criminals would be arrested again.

SB 91 was projected to save $380 million over 10 years by reducing sentences for nonviolent offenders and cutting down on the number of people in jail and prison. Some of the savings were earmarked for programs that are supposed to fight root causes of crime, like drug addiction.

More than $30 million has been budgeted for those "reinvestment" initiatives in the past two years.

But the law, 123 pages as a formally enrolled statute, faced a torrent of criticism almost as soon as it went into effect, with opponents quickly linking it to reports of rising crime. Last month, a substitute host on conservative Amy Demboski's radio show, Justin Giles, called the legislation "a thumb in the eye of justice" and a "trick by these evil, Marxist leftists."

"All hell is breaking loose in the state of Alaska, but especially in Anchorage," Giles said. "Things were bad before, and now we've got a supercharger on the bad — that's what SB 91 is."

Giles also argued that treatment and rehabilitation promised as part of the legislation hasn't materialized.

Academic experts in Alaska, however, say they don't have any data linking state's crime trends with passage of SB 91 — or that show if the bill is accomplishing its goal of cutting down on repeat offenses.

The bill hasn't even fully taken effect, with a new unit of 60 armed corrections officers, tasked with monitoring defendants out on bail rather than in jail, launching in January.

And while certain types of violent and nonviolent crime have been rising in recent years, that trend in some categories dates back decades, said Brad Myrstol, associate professor at the University of Alaska Anchorage's Justice Center.

"The legislation hasn't really had time to cool yet. It's hot off the presses," Myrstol said. "We should always be careful extrapolating recent events."

During the upcoming special session — originally called to address the state's deficit and tentatively scheduled to start Oct. 23 — Walker is asking lawmakers to approve Senate Bill 54, a package of changes unveiled earlier this year that would modify the original criminal justice legislation.

SB 54, among other things, provides for a jail sentence of up to a year for first-time felony offenders, rather than up to 18 months of probation with no jail time. And for low-level theft, it provides for up to 10 days in jail for a third conviction, instead of the probation set out in last year's bill.

The Walker administration's projections for an initial version of SB 54 said it could add more than $4 million a year in prison costs.

The proposed sentences in the legislation are stiffer than the tweaks to SB 91 recommended earlier this year by the Alaska Criminal Justice Commission.

[A police theory on Anchorage's spike in stolen cars: Free taxis for drug dealers and burglars]

At the time, the commission, in a report, stressed that its recommendations — unlike the original proposals it made that formed the basis for SB 91 — weren't based on data. Instead, they were a response to feedback from law enforcement, prosecutors and the public, who wanted sentences to account for the effect of deterrence and "the need to express community condemnation of crime."

One anti-SB 91 activist, Anchorage resident Phyllis Kruger, showed up at Walker's news conference with a notepad and registered her objections to the gathered officials and reporters.

"I just am tired of it. I work in real estate; I've seen what's happening in Anchorage and all over the state," she said afterward. Criminals, she added, "go to jail, they get out because of this terrible law."

Small business owners and prosecutors have described a wave of theft cases since SB 91's passage, and have said their frustration is that the legislation minimizes consequences for criminals.

At least one community has taken the problem into its own hands, with the "Juneau Avert Chronic Shoplifting Project" using a $67,000 federal grant to pay caseworkers to work with repeat offenders.

At Walker's news conference, he and other members of his administration couldn't point to direct evidence showing SB 54 would stop the rise in crime, or that SB 91 was fueling it. But Jahna Lindemuth, Walker's attorney general, pointed to the anecdotal testimony before the criminal justice commission, on which she serves.

The testimony may not be the same kind of statistical evidence that spurred the first criminal justice bill, she said. But it's still evidence, she added.

Myrstol, the professor, said it would likely take two to three years after SB 91's passage before researchers get the data they need to assess how it's working. And the more the legislation is adjusted, he added, the more difficult it will be to track its effects.

"The challenge is people don't have much patience for that sort of research question," he said. "And I understand why they don't."