‘Let Floyd GO!’: How a guy who finds stolen vehicles became a folk hero to some crime-weary Anchorage residents 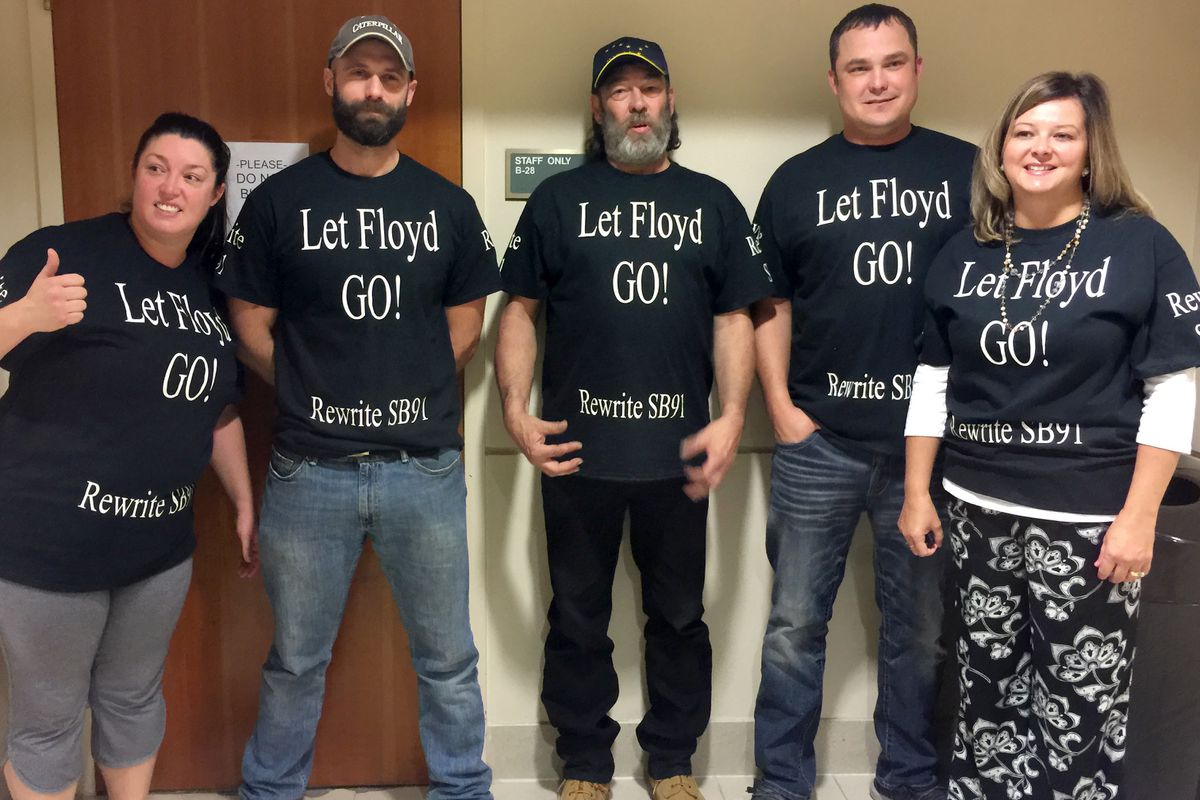 Doria Clark, Daniel Miller, Floyd Hall, Chad Martin and Candis Bishop wear T-shirts supporting Hall at his arraignment on a reckless driving charge on Oct. 3, 2017, at the Nesbett Courthouse in Anchorage. The group says Hall should not be punished for his volunteer efforts to recover stolen vehicles. (Michelle Theriault Boots / Alaska Dispatch News)

Doria Clark, Daniel Miller, Floyd Hall, Chad Martin and Candis Bishop wear T-shirts supporting Hall at his arraignment on a reckless driving charge on Oct. 3, 2017, at the Nesbett Courthouse in Anchorage. The group says Hall should not be punished for his volunteer efforts to recover stolen vehicles. (Michelle Theriault Boots / Alaska Dispatch News)

On Tuesday morning, a dozen strangers gathered in the basement of the Anchorage courthouse to attend the arraignment of Anchorage's newest unlikely folk hero: Floyd Hall, a soft-spoken, self-described "hippie biker rocker" who spends much of his free time finding other people's stolen cars.

In August, police say, he went too far.

Hall, 52, is charged with a misdemeanor count of reckless driving by Anchorage police. The charges stem from what police said was a high-speed chase over a stolen car Hall was pursuing.

To the dozen or so people who showed up to support him at his first court date on Tuesday, Hall is no vigilante.

Being charged with a crime may have only increased Hall's stature among people who feel frustrated by being victimized by crime and weary of being told that understaffed police won't have time to look for their stolen property, said Damion Turchetti, who said he's also peripherally involved in citizen stolen car recovery efforts.

The people who showed up at the courthouse at 9 a.m. Tuesday didn't know one another, for the most part. But they were bound together by a common experience: Nearly all have had their cars stolen. And most had found them via Facebook groups and a loosely affiliated crew known as the "A-Team," of which Floyd Hall is the core member.

"I'm just grateful to him," said Candis Bishop, who said she's lived in Anchorage for 15 years. After her family's truck, ATV, guns, four-wheelers and Zodiac boat were stolen from the Independence Park area in South Anchorage in June, the A-Team helped find some of the items after she posted about it online, she said.

Alaina Thiessen even made T-shirts that said "Let Floyd GO!" on the front, which some of the Hall supporters wore.

Just a few days ago, Hall had found Thiessen's stolen Chevy Silverado — and the container with her son's ashes taken along with it.

Hall teared up when talking about the stolen ashes.

Hall estimates he's helped to find and recover 25 or more stolen vehicles, along with a small network of other volunteers who met each other on flourishing local Facebook groups like "Stolen in Alaska," some of which have thousands of members.

They call themselves the A-Team — the A is for Anchorage — and see their work as helping an understaffed police department respond to a surge of motor vehicle thefts.

But at the end of August, Hall ran afoul of the Anchorage Police Department himself.

According to the department's version of events, on the evening of Aug. 31 Hall spotted a white truck with stolen plates and chased it at high rates of speed in South Anchorage. (Hall contends he wasn't driving that fast.) The chase ended on Brayton Drive, when one of the people in the white truck got out and shot at Hall's car, according to police.

Police sent out a statement with the headline "community reminder about taking the law into your own hands" describing what had happened.

Hall was charged with a single count of reckless driving, a Class A misdemeanor. At the hearing he was offered a 30-day sentence with 30 days suspended and a fine.

He said Tuesday he plans to fight the charge.

"We weren't trying to do anything crazy," he said. "They're making some statements I don't think are true."

Hall, who is originally from North Carolina, has an adult son.

In the winter he works as a snowplow driver. He's on a fixed income, he says. This summer, he decided to take some time off and "just enjoy myself," he said.

After a friend's car was stolen, he got involved in recovery Facebook groups. Because he doesn't have young kids living with him and is single, he has more time to go out and actually search for the cars.

Now, it's practically a full-time gig. Hall gets messages via Facebook — "lots and lots" — from people desperate to get their vehicles back, he said.

Using information from an official database that lists stolen vehicle information and is updated daily, he and a small group of others go out searching.

When a vehicle is found, Hall says he calls police right away and sticks around, "sitting on" the car until police arrive. That can take hours, Hall said.

The group's newest touch is taking a picture of the found stolen vehicle with a withered dead rose placed on it.

"The black rose. The kiss of death," Hall said. "If the vehicle gets recovered, we post a picture with (the rose) in it if we can. It's sort of a tease to the thief."

"Floyd is fearless," said Daniel Miller, another member of the A-Team who showed up to the hearing.

Hall says he respects police and is trying to make their job easier.

"We're not trying to do their job. I know they're on like, domestic violence calls, more important calls than going to sit on a stolen vehicle," he said.

The group resolved that they'd meet again for Hall's next court date.

Later that day, after a nap, Hall was out again.

By midafternoon he'd found a silver GMC truck reported stolen the day before from a South Anchorage business parking lot.

He posted a picture of the truck with its front lights and grill stripped off, abandoned against a fence.