The Anchorage Police Department’s evidence unit was already maxed out. Then the number of car thefts doubled. 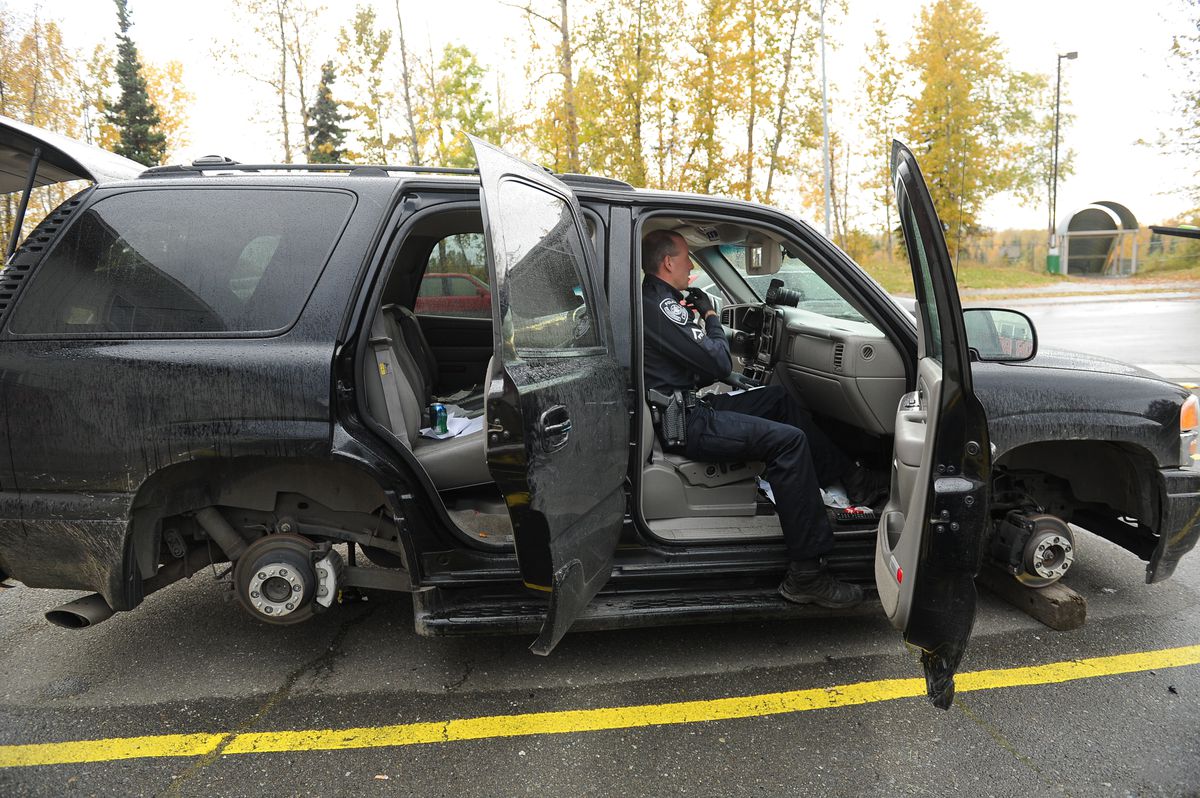 Inside the stolen truck, empty packets of saltine crackers and Ramen noodles littered the floor.

Anchorage police officer Shawn Davies snapped on black plastic gloves and grabbed a large camera. He opened the door of the truck, which was sitting on wooden blocks in a parking space in front of a Mountain View apartment building. Thieves had plucked off the tires and an expensive set of rims.

For more than an hour on that night in September, Davies made his way around the car. He snapped photos. The flash went off in the rain.

Davies painstakingly documented the inside of the car, dusted for fingerprints and took DNA swabs. He collected anything that didn't belong to the truck's owner, down to receipts and trash. Even a can of soda could be important later in investigating a case.

Vehicle thefts have skyrocketed in Anchorage. By September of this year, police had found nearly 2,300 stolen vehicles, a record for the city. Police recovered about 1,950 cars in all of 2016. The annual average of recovered stolen cars in the years before 2015 was around 1,200.

For every stolen car that turns up, there is often boxes of evidence to be collected. It ties up hours of police time.

And in warehouses around Anchorage, police are storing more evidence than ever before. Space was already tight. In one evidence warehouse, boxes are packed up to the rafters of a 50-foot ceiling. The dramatic spike in car thefts has only accelerated a problem, officials say, that will sooner or later take money to solve.

The stuff of stolen cars

In late September, someone stole a black GMC Denali Yukon from an Anchorage car dealership. It belonged to an employee at the dealership. The thief jammed a screwdriver into the ignition.

A few days later, the truck wound up in front of the Mountain View apartment building. Maintenance workers called for a tow. The tow company checked what's known as the "hot sheet," an active list of stolen cars, and called the cops.

Davies showed up in his patrol car. This is a routine for him. A day earlier, Davies helped collect four boxes of evidence from just one car. All of it had to be logged into the property and evidence unit.

"I've found trucks before when the entire bed is full of stuff, and people are like, 'This isn't ours,'" Davies said.

In those cases, police ask the victims to drive to the police station, Davies said.

"And it's a massive pile that takes hours to package."

The evidence tied to a single recovered stolen car can take up multiple officers' time, said Sgt. Gerard Asselin, who oversees the evening shift patrol and also responded to the call in Mountain View.

In Anchorage, residents have repeatedly voiced frustration at a slow response from cops, or no response at all. But evidence seizure, which is critical to solving cases, shows how much time each crime scene can take, Asselin said.

"If I had to guess, there's 40 to 45 calls holding at the moment, and Officer Davies is here doing this," Asselin said. "Which is important for this individual case, but it's not the only thing going on."

Asselin and other police officials have a theory behind the spike in stolen cars: More people are using them as taxis to commit other crimes. And while stolen cars have been a problem for as long as cars have existed, the way the cars are being used is creating a bigger mountain of recovered goods, Asselin said.

There are also more officers working in Anchorage now than at any time in the past decade, Asselin said, which means there's more evidence being taken in.

Much of the evidence looks like trash. But a receipt, a wrapper or a soda can could tie a suspect to a crime scene later. Police are supposed to collect as much evidence as possible.

In the background, it adds up to a looming challenge: How to store it all.

Into the evidence unit

From a crime scene, evidence travels with Davies and other officers to a nondescript warehouse at a hidden spot in Anchorage.

In one of the warehouses, white boxes are stacked to the ceiling. Shelves bulge with car parts and bumpers from wrecks. Bicycles hang in rows on racks. Lines of beige bags hold pieces of clothing marked for hazardous or biological materials. In black file cabinets, there are old cassette tapes of police recordings.

A complicated inventory system keeps track of all the evidence, some of which dates back decades. The department audits the system every year, said Justin Doll, the chief of the Anchorage Police Department.

One recent weekday morning, Doll walked into the warehouse, rounded a corner and spotted moose antlers with duct tape around the edges. The antlers sat wedged into a shelf between car parts from wrecks.

"Virtually everything you can imagine, right, is stored here," Doll said, pointing at the antlers.

Not all of it is evidence. Some items have been collected for safekeeping, such as valuables after a person dies, Doll said. Every little piece has a story attached to it.

Access to police evidence is tightly controlled. Officers have to check out evidence for a case and check it back in. A bunch of laws dictate how evidence has to be preserved and when police can dispose of it. In the most serious cases, such as murder, sexual assault and sex abuse of a minor, the evidence has to be stored at least 50 years.

APD ran out of room for evidence at its Tudor Road headquarters a long time ago, Doll said. Steadily, evidence has spread to buildings elsewhere.

Running out of room

Benjamin Manthey has worked as a technician in the evidence unit for more than a decade. When he started, all of the evidence fit into a single warehouse at an undisclosed location.

Close to nine years ago, police began using a second warehouse of the same size. It's nearly full too, Manthey said. The amount of evidence in the police department's possession has nearly doubled.

Manthey pointed to a cart stacked with boxes: "That's just from today."

It seems like more and more comes in every year, Manthey said. Laws have also changed, extending the length of time the police are required to store evidence.

Space is a general issue for the police department, which has also outgrown its 1980s-era headquarters. One lieutenant literally works out of a broom closet, Doll said.

But there's a lot of things the police department can't just stop doing, Doll said, and gathering and storing evidence is one of them. Eventually, Doll said, police will have to talk to Anchorage residents about how to fix the storage problem.

"You don't want us to get rid of your evidence because we didn't have space," Doll said.

If Manthey could have his way, he'd love an evidence unit designed from the ground up. That's been the case in much larger cities, like Los Angeles.

"We're not doing things as smartly as we could be," Matney said. "There's stuff stacked to the ceiling. It takes longer to move a ladder, climb up here and grab that."

But building new public facilities comes with a huge price tag, Doll said. At the same time, he said, it costs time and money for officers and evidence technicians to travel between different buildings.

The return of the giraffes

A huge brown dumpster sits at the front of the evidence warehouse. It fills up about every week and a half with evidence that police have been authorized to throw out. The order can come from prosecutors, or the time frame for storing an item may have expired.

Then a truck drives it to the landfill. The technicians stay to watch another truck run over the evidence, mix it up and destroy it, Manthey said.

More valuable pieces of evidence are sold at auction. Most of the time, the property never makes it back to the original owner, Doll said.

But sometimes there's a happy ending.

Standing near the front of the warehouse, Manthey looked at a painting of two giraffes that was sitting on top of a filing cabinet. A smaller giraffe was nuzzling its neck against the larger giraffe.

Police found the painting in a stolen car, Manthey said. It wasn't clear if the painting was originally in the car, or if it had been taken from a house or business in a break-in.

On the painting, there was a gift card, with a name.

The evidence technicians looked up the name in the state's database of ID cards and driver's licenses. A technician made a phone call. The painting's owner picked up.

Soon, Manthey said, the giraffe painting will be returned to the original owner.

That frees up just a bit of space.