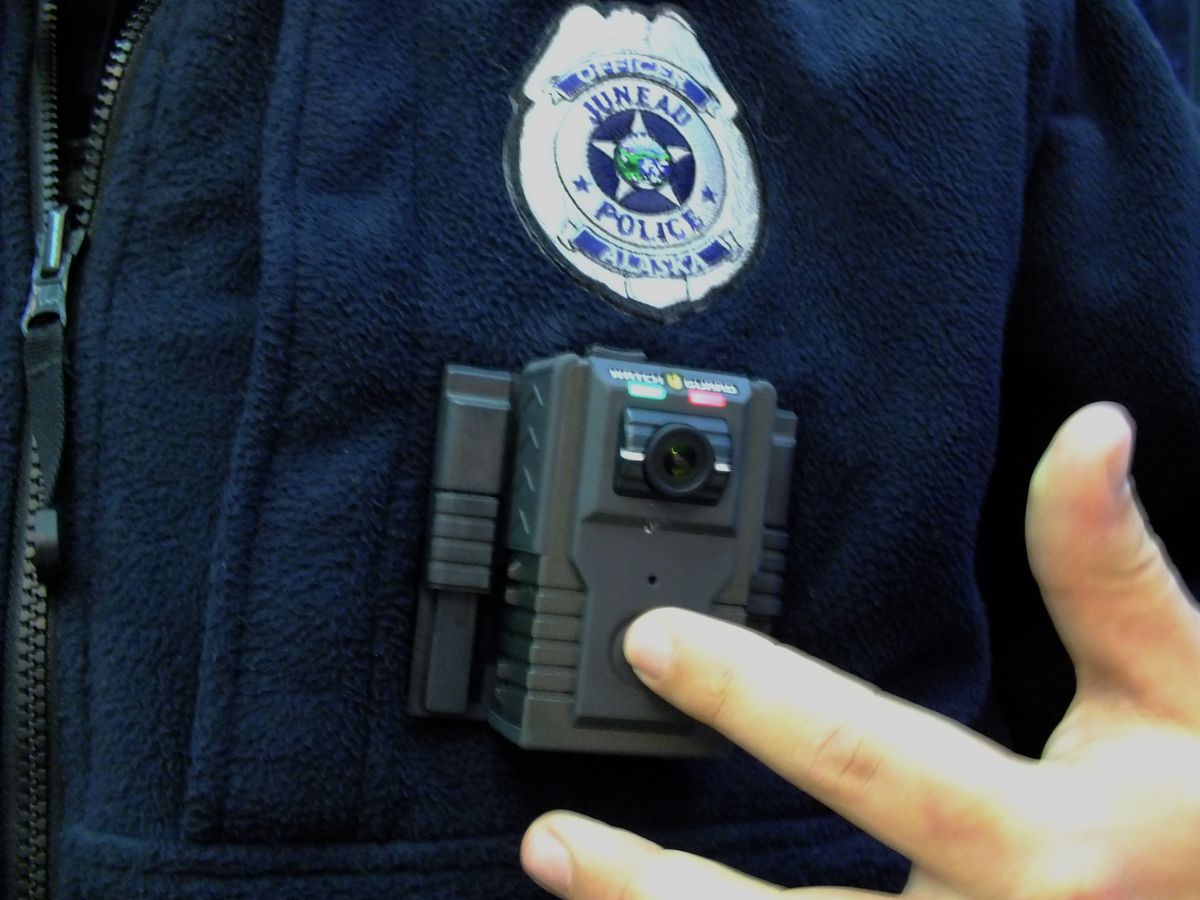 The green light on this body camera indicates that it is on and recording a continuous loop. When an officer presses the button below the lens and the red light comes on, then the recording is being stored and tagged. (Matt Miller / KTOO)

The green light on this body camera indicates that it is on and recording a continuous loop. When an officer presses the button below the lens and the red light comes on, then the recording is being stored and tagged. (Matt Miller / KTOO)

Observant Juneau residents may have noticed that a few police officers are wearing an extra piece of gear: body cameras.

Officer Alex Smith has been using one for about a month now. Smith said he activates it every time he has an official contact.

On this mild December day, Smith has the body camera magnetically attached to his chest on his fleece uniform.

"We are constantly following the country's lead and other agencies around the country that have already deployed body worn cameras," Mercer said. "We're looking at issues that those agencies are running into in regards to retention of data to also when those cameras will be used or required to be turned on."

The camera, actually, is always recording. Audio and video are recorded on a continuous loop.

When an officer presses a button on the front of the camera, it turns on a red light, indicating the video is being tagged and stored from a moment a few minutes before the officer pressed the button.

"Because in police work, things happen suddenly," Mercer said. "Especially when you have cameras where you have to self-activate them. I believe that's a mechanism put in the camera to help with that."

A small display and button on the body camera allows an officer to quickly label the type of event, such as a traffic stop, an arrest warrant or a theft call.

A vehicle's lights and siren during a pursuit, for example, tags the recording from a starting point that's a few minutes earlier so that it's possible to see what led to the pursuit.

Smith likes the body camera because it holds everyone accountable.

"When people know we are recording them as much as they're recording us, a lot of times that actually helps to de-escalate (the situation)," Smith said. "People realize their conduct is more holistically collected than just audio, as has happened before. Because as one of the downtown officers, I interact oftentimes with intoxicated [people] or people who are impaired by substances."

Smith said such video is also useful for other investigations, like when checking out a burglary call or other suspicious activity.

"Even just having the video really helps connect the dots at a later time," Smith said. "It kind of allows you to pick up a bigger spectrum of information."

When Smith returns to the police station at the end of his shift, he puts the camera into a charging dock and the video transfers to a server.

He an also add more information to the file label, like "Traffic stop on a truck driven by John Doe on Egan Drive," which would make it easier to find the video later.

Smith uses his body camera as a backup to the digital audio recorders that all officers use.

However, it probably won't completely replace them, since Smith has noticed the body cameras cannot be used for phone conversations like the audio recorders.

Mercer said they don't have a firm date set yet, but he hopes all patrol officers and their supervising sergeants will be trained and using body cameras by the middle of 2018.

This story was republished with permission from KTOO.