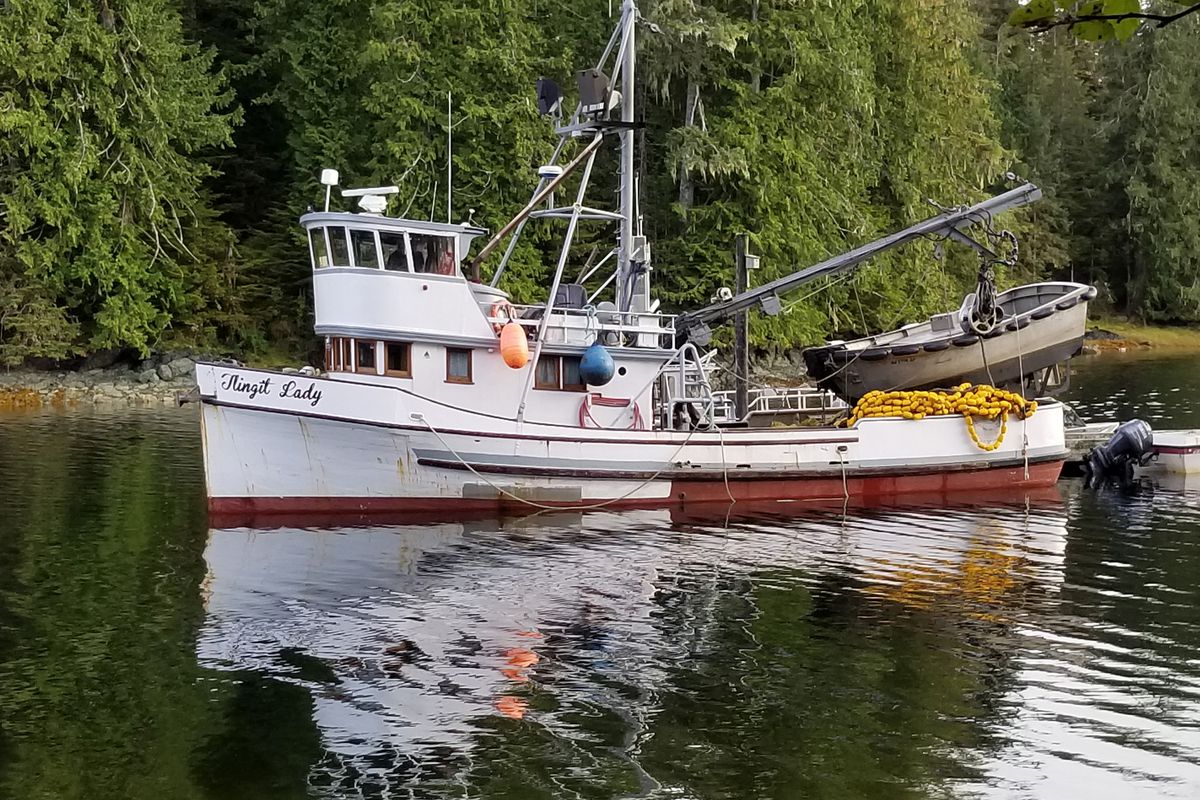 Commercial fisherman Curtis Demmert has been ordered to forfeit his fishing vessel, the Tlingit Lady, along with nets, the skiff and other gear, as part of his punishment for fishing in a closed season and closed waters. (Photo provided by state Office of Special Prosecutions)

Commercial fisherman Curtis Demmert has been ordered to forfeit his fishing vessel, the Tlingit Lady, along with nets, the skiff and other gear, as part of his punishment for fishing in a closed season and closed waters. (Photo provided by state Office of Special Prosecutions)

An Alaska commercial fisherman who prosecutors say robbed creeks of salmon heading to spawning grounds has lost his fishing vessel, nets, skiff and other gear, under a sentence imposed last week in Prince of Wales District Court.

Curtis Demmert, now 32 of Klawock, was fishing in Coco Harbor, on Dall Island to the west of Prince of Wales Island in Southeast Alaska, according to the charging document and other court filings.

It's an area that has been closed to commercial fishing for at least 29 years, a state biologist told wildlife troopers investigating the matter.

"This is extraordinarily uncommon," said Aaron Peterson, an assistant attorney general in the Office of Special Prosecutions. "The level of egregiousness is what sets it off."

Sometimes fishermen fall asleep and drift over a boundary line. Sometimes their GPS tracking system puts them in the wrong spot. That is not what happened here, Peterson said.

Demmert was fishing 65 miles into closed waters – not just barely over the line between legal and illegal fishing, prosecutors said.

On Jan. 10, he was sentenced by Magistrate Judge Kay Clark to a year of probation and $32,728.79 in fines. The judge also ordered him to forfeit money and property: $17,728.79 — the value of the illegally caught salmon, his interest in fishing seiner Tlingit Lady, his skiff, nets and all other fishing gear.

Demmert was "creek robbing," Peterson said, a term that describes when commercial fishing is done illegally at the mouths of salmon streams. Several streams feed into Coco Harbor.

"If it had not been for the witness that happened to observe his illegal fishing, he would have come away with thousands in profit at the expense of a decimated salmon stream," Peterson wrote in his sentencing memorandum.

The government will seize and sell a fishing vessel only in the most extreme cases, Peterson said. There is no felony crime for illegal fishing in Alaska, so fines and forfeitures are among the main penalties. Peterson had argued for a $60,000 fine and for Demmert to be banned from fishing for a year, in addition to the forfeiture of property. But he said the sentence was fair.

The value of the fishing boat and gear is "well into six figures," Peterson said.

He argued for Demmert to lose his boat to serve as a warning to other fishermen.

The night of Sept. 13, a man called troopers from a satellite phone to report the Tlingit Lady "actively seining for salmon" at the head of Coco Harbor, according to the charging document. Seining is a type of fishing in which a large net is deployed around a school of fish, encircling it. A lead line that weights the net bottom is then pulled closed to prevent fish from escaping.

The man called back and said he had video and pictures, which were crucial to the investigation, according to prosecutors.

After pulling in its nets, the vessel's lights were turned off and it left the area in the dark, prosecutors said.

"The fact that the defendant was caught in this matter is nothing short of miraculous," Peterson wrote in his sentencing memo. Wildlife troopers do not have the resources to patrol all state waters, he wrote. And Demmert was in a remote area far from where anyone expected to see a commercial fisherman.

At the time, the entire district where he was fishing was closed to salmon fishing. Even during commercial openings, no fishing is allowed several miles from stream mouths there to protect salmon runs, compared to standard closures 500 yards from a stream mouth, said Forrest Bowers, the state commercial fishing operations manager.

Fishing alone in a long-closed area, Demmert hauled in a catch 2 1/2 times the average for the day in waters open to fishing, Peterson wrote. He offloaded 23,159 pounds of chum salmon and claimed they were caught in legal waters. The average that day? Nine thousand pounds, prosecutors said.

Demmert still could lose his commercial salmon permit for a year or more. A state law provides for salmon fishermen to be hit with demerits for fishing convictions. The state can suspend a permit for one to three years, depending on the number of demerits.

"This is one of the last places on Earth where most residents can drive a short distance from their home and fish for all five Pacific salmon species," Peterson said in the sentencing memorandum. "That will only remain true if management is taken seriously and punishment for violating the regulations designed to ensure healthy populations are severe."

It will take years to determine whether Coco Harbor streams were in fact damaged, prosecutors said.