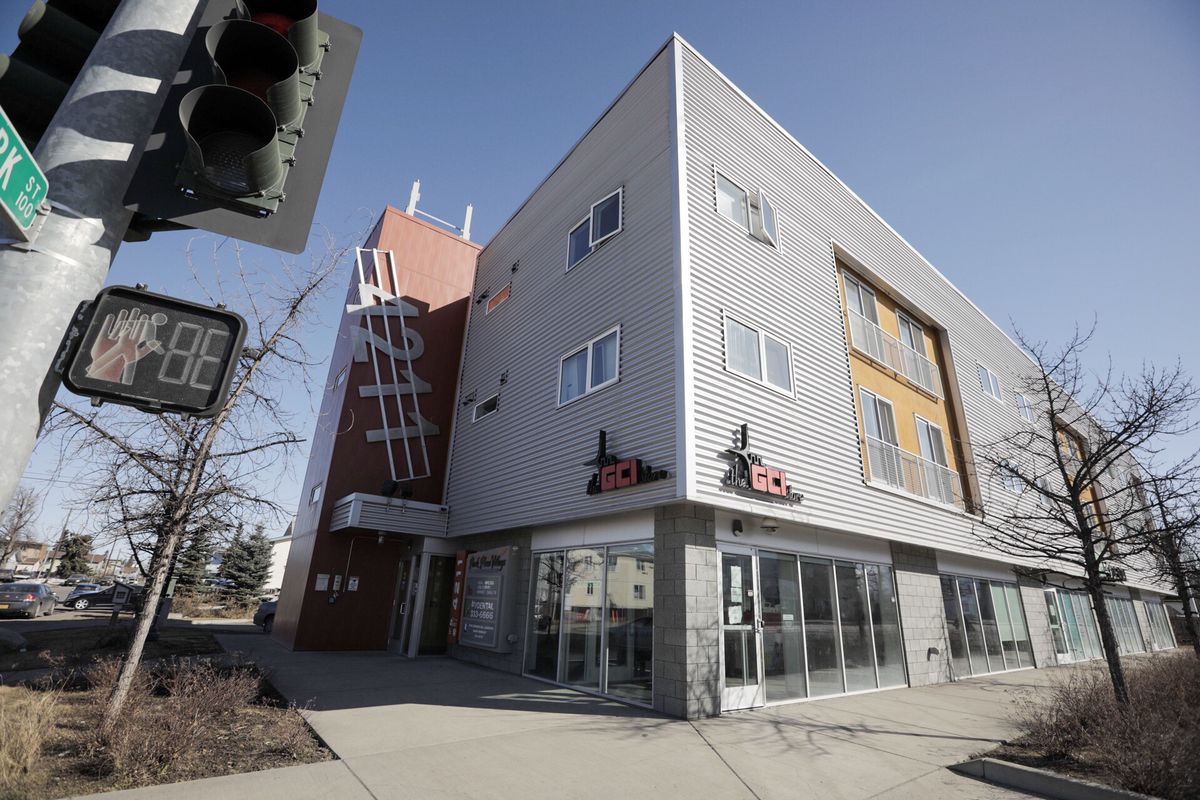 A man was shot multiple times in an apartment complex at 4211 Mountain View Drive on April 12, 2018. SWAT and a K-9 unit were on scene to search for two suspects Thursday morning. (Loren Holmes / ADN)

A man was shot multiple times in an apartment complex at 4211 Mountain View Drive on April 12, 2018. SWAT and a K-9 unit were on scene to search for two suspects Thursday morning. (Loren Holmes / ADN)

The victim in a Thursday homicide in a Mountain View apartment was shot by his girlfriend's ex-boyfriend and another person amid an argument, Anchorage police say.

The suspects, 19-year-old Mickee Thompson and 18-year-old Robert Smith, each face charges of murder and evidence tampering, according to charging documents in the case.

The victim was identified as Sosaia Finau, 21, in a statement from police Friday evening.

Police were still searching for the suspects Friday. Warrants have been issued for their arrest.

[Anchorage shooting victim's father: 'He was a lovely son']

Finau's girlfriend told detectives that her ex-boyfriend, Thompson, and Smith came over to her apartment in the 4200 block of Mountain View Drive and Finau was also there, according to the charging documents. Police did not name the girlfriend.

An argument ensued when the woman asked Thompson to return a set of apartment keys, the charges say, and "the victim stepped in to quell the argument."

Thompson and Smith both shot Finau multiple times and fled on foot with the weapons, according to the charges.

Finau's girlfriend told police that she thought Thompson "emptied the clip" while shooting and Smith also fired "several" times, according to charges. Police received a call of shots fired just after 9 a.m. Thursday, and a SWAT team searched the area.

Searching the apartment, police found Finau lying on the kitchen floor and observed at least 20 shell casings on the floor, documents say. There appeared to be two different calibers of casings.

Video surveillance outside the apartment complex showed that Thompson's mother arrived in a red Chevy Tahoe, according to the charges. Thompson placed an item or items in the backseat and then fled on foot eastbound with another man, the documents say.

[Police search for 'armed and dangerous' suspects in Anchorage homicide]

The suspects were considered "armed and dangerous," police said in an alert midday Thursday. "Do not approach them."

Our prayers and thoughts go out to family and friends of #23 Sosaia Finau. Sosaia passed away yesterday at fault of a...

Police are still looking for more surveillance video or witnesses, police spokesman MJ Thim said. He added that while the suspects are "dangerous," the shooting was an isolated incident.

"This was not a random crime," he said.

Finau's girlfriend was recently granted a domestic violence restraining order against Thompson, charging documents say, but it hadn't been served yet.