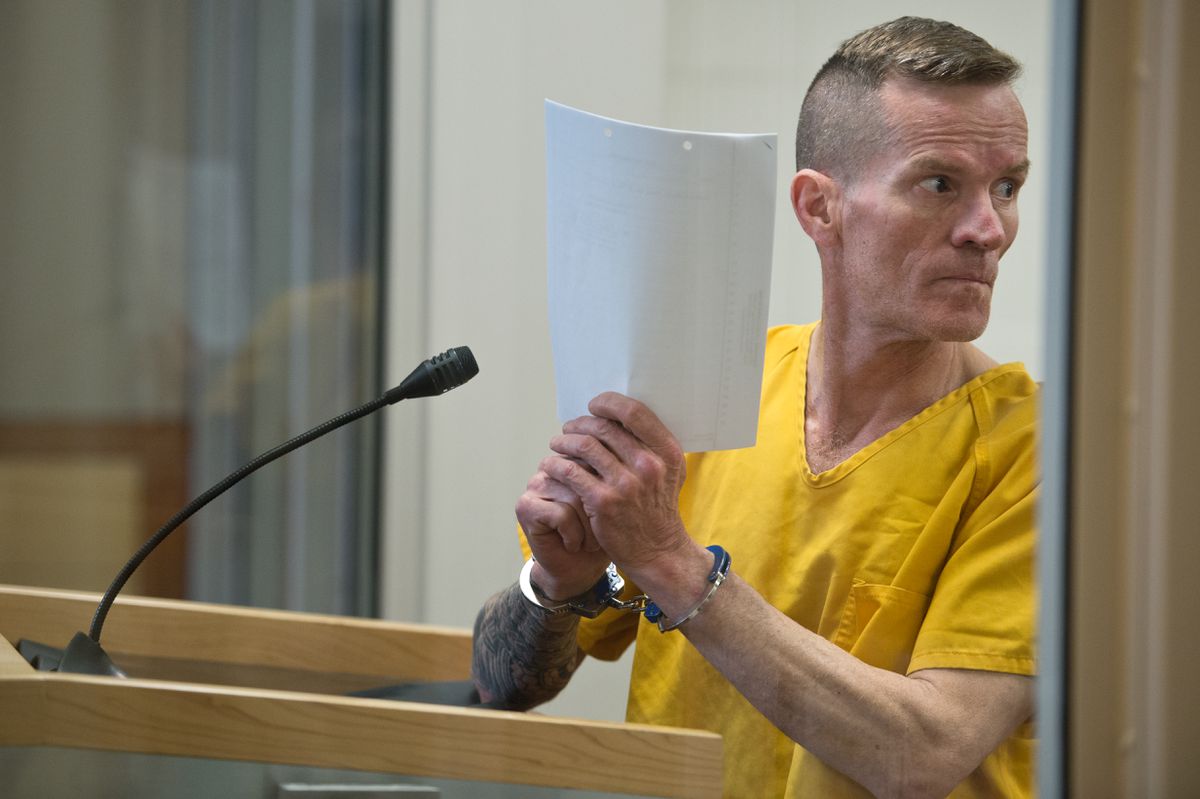 Vance Peronto was arraigned on April 30, 2018 at the Anchorage Jail. Peronto, an Alaska state trooper, was charged with attempted sexual abuse of a minor (Marc Lester / ADN)

Vance Peronto was arraigned on April 30, 2018 at the Anchorage Jail. Peronto, an Alaska state trooper, was charged with attempted sexual abuse of a minor (Marc Lester / ADN)

An Alaska state trooper was arrested Sunday on charges of attempted sexual abuse of a minor when he showed up for a hotel date he set up with a 16-year-old girl, troopers say. Charges say the trooper drove to the rendezvous in his patrol car carrying a pair of Victoria's Secret underwear he purchased for the girl.

Trooper Vance Peronto, 57, a 16-year veteran of the public-safety agency, met the teenager April 8 when he pulled her over for driving without headlights on the Kenai Spur Highway, according to troopers. Peronto did not write the girl a ticket and let her go with a warning.

Peronto messaged the girl on Facebook the next morning and sent a "friend request," the charges say. The two began sending messages that quickly became flirtatious, according to prosecutors.

When Peronto asked how old the girl was and she replied that she was 16 he wrote "WOOW Gulp," according to the charges. He told the girl he was 57.

Over the course of a few days, the messages became "very explicit" and sexual, prosecutors say. Peronto asked the girl to send him "pics, pics, pics" and she did, sending at least one image where she "appears … either completely nude or wearing only a pair of women's panties."

On April 12, Peronto sent messages to the girl that seemed to show that he was aware of the danger their relationship posed and spoke of himself in the third-person.

"DONT DO THIS VANCE!!!! STOP NOW. THIS GIRL/young lady is 16 Vance. You're wrong Vance if you even begin to think you'll avoid, fight off, stop, not make love with her. IT'LL HAPPEN and then your life as you know it will be over. Everything you have gone," the charges say he wrote.

He also wrote, "You're not worth my career or 10-20 yrs in jail. Hell no," according to the charges.

When the girl messaged that she was "disappointed and to take it easy on her if he pulled her over again" Peronto suggested they meet for a movie night he billed as a "Friends Date Night. Where your Trooper friend pampers his Classy Beautiful LADY friend."

The girl's father learned of the messages and reported the contact to the Office of Professional Standards at the Department of Public Safety, public safety spokesman Jonathon Taylor said. Troopers interviewed the girl.

At that point, Taylor said, troopers obtained control of the phone and permission to access the girls' social media accounts.

When Peronto messaged that he was going to be in Anchorage for a training event, investigators pretending to be the girl arranged to meet at a hotel room, he said. They said she'd be there alone.

On Sunday, when he arrived at the hotel in his patrol car and knocked on the door, law enforcement officers were waiting. Troopers assisted by members of the Anchorage Police Department SWAT team intercepted him and made an arrest, Taylor said.

The charging documents say Peronto had a pair of Victoria's Secret panties with him when he was arrested.

Peronto hid his face behind a sheet of paper during Monday's arraignment.

Francoisi said that he considered Peronto a potential flight risk. He is not allowed to leave Alaska.

Taylor said Peronto is still employed as a trooper at this point.

He couldn't say whether troopers believe there may be additional victims. Public records show  Peronto lived in Eagle River before moving to Sterling.

He worked as an Alaska State Trooper in Kotzebue and the Mat-Su before being stationed in Soldotna, according to Anchorage Daily News archives and the Department of Public Safety.

Peronto earned a salary of $99,044.40 as a trooper, according to the state Division of Personnel.

Among other duties over the years, he served as an investigator and drug detection K-9 handler.

His 30-year marriage ended in 2015, according to court filings in his divorce case. In a divorce hearing, he said he also received Army retirement benefits.

Peronto's name surfaced in media reports earlier this year as part of a lawsuit by a former state prosecutor who accused Peronto of sexually harassing her with a lewd text message in 2014. Peronto and the state argued the two exchanged dozens of texts the day before the one the prosecutor reported.

Taylor said he couldn't speak to any internal handling of that accusation, calling it a personnel matter.

The Alaska Police Standards Council, which reviews cases of misconduct by certified officers, opened a case on Peronto on Monday.

The council has not reviewed him before, executive director Bob Griffiths said.

Asked if the federal lawsuit prompted a discussion of a review, Griffiths said no because he wasn't aware of it and no official report was made.

"Whether that would have precipitated council action or not, I can't tell," he said.

It's unlikely the council will take any action on Peronto's new case until the criminal case is resolved.