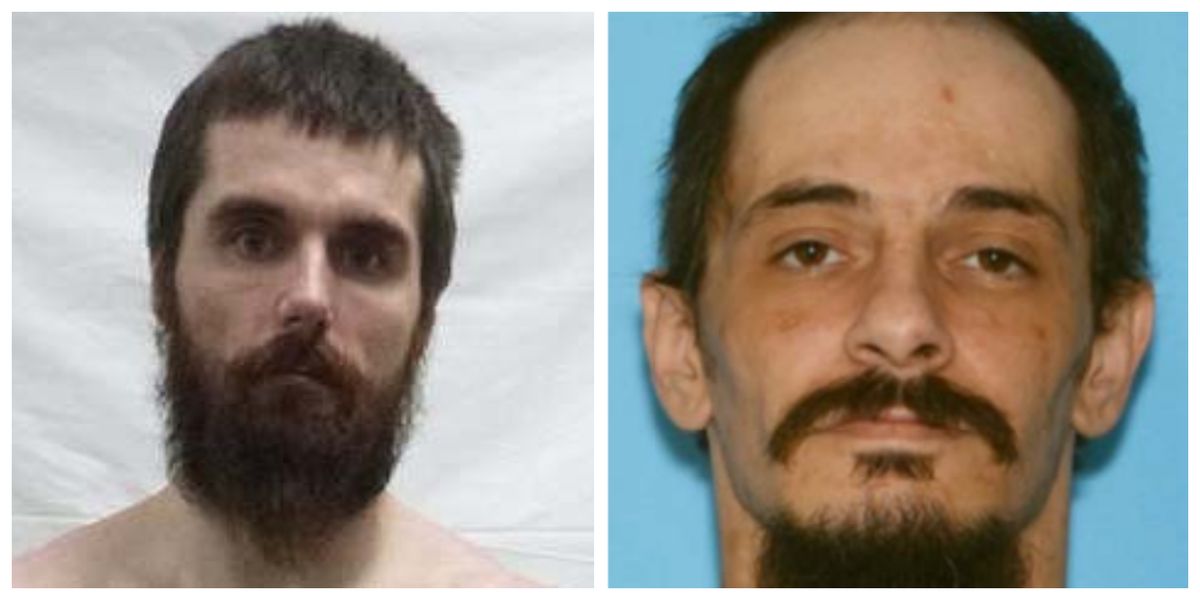 Glen Baldwin (left), 37, was one of six people charged on March 21, 2019 with murder in aid of racketeering, among other charges, in the August 2017 killing of Michael Staton (right), 34. Both men were members of the white supremacist 1488 gang. Glen was still at large as of March 27, 2019. (Photos courtesy U.S. Attorney District of Alaska and Alaska State Troopers)

Glen Baldwin (left), 37, was one of six people charged on March 21, 2019 with murder in aid of racketeering, among other charges, in the August 2017 killing of Michael Staton (right), 34. Both men were members of the white supremacist 1488 gang. Glen was still at large as of March 27, 2019. (Photos courtesy U.S. Attorney District of Alaska and Alaska State Troopers)

Several alleged members of the 1488 white supremacist prison gang have been charged with crimes including kidnapping, firearms trafficking, narcotics distribution, assault and murder in connection with the disappearance of a Wasilla man in 2017.

The U.S. Attorney’s Office for the District of Alaska announced the case Wednesday in an Anchorage press conference with the FBI, Anchorage Police Department, U.S. Marshals and Alaska State Troopers.

An indictment unsealed Wednesday charges six men — named as Filthy Fuhrer, 42, who legally changed his name from Timothy Lobdell; Roy Naughton, 40; Glen Baldwin, 37; Craig King, 53; Beau Cook, 32; and Colter O’Dell, 26 — in connection with what prosecutors said was a wide-ranging racketeering enterprise born out of allegiance to a violent racist prison group that infiltrated Alaska in 2010.

The six men are accused in the August 2017 beating, kidnapping and murder of gang member Michael Staton, nicknamed “Steak Knife,” who according to Alaska State Troopers was reported missing that year.

All but one of the men charged, Glen Baldwin, are in custody, officials said.

According to the plea agreement, Kozorra called 34-year-old Staton into Anchorage from Kenai on Aug. 3, 2018. Staton drove a stolen Chevrolet Malibu into Anchorage, where he met Kozorra, Clowers and Kozorra’s then-girlfriend, Taylor Lack, who is also facing charges related to her alleged involvement with the gang.

The four drove from Anchorage to an abandoned “trap house” in Wasilla, where Baldwin and O’Dell were waiting.

At the trap house, “Staton was told he was losing his patch,” meaning the tattoo symbolizing his membership in the gang, the plea agreement said.

Investigators believe the four men beat Staton, binding his hands and feet with duct tape before shoving him into the trunk of the stolen Malibu and driving to a duplex in Wasilla, where Craig King, described as a member of the Hells Angels motorcycle gang and associate of the 1488 gang, lived with his wife. She has not been charged.

According to the plea agreement, King had previously accused Staton of stealing several items from him, including a valuable Hells Angels motorcycle vest and drugs Staton was supposed to have sold.

Half of the duplex was vacant, and Beau Cook had allegedly prepared that side for a beating by “covering the floor and walls with painter’s plastic.”

After the men arrived at the duplex, O’Dell, Baldwin, Kozorra and King beat Staton further, the plea agreement said. Baldwin and Kozorra allegedly took turns burning Staton’s 1488 tattoo from his ribcage with a knife that had been heated by a propane torch.

They then rolled him tightly inside a rug and the painter’s plastic and loaded him into the cargo area of O’Dell’s Chevrolet Tahoe, according to the plea agreement. Investigators believe Staton was still alive when he was placed in the vehicle and driven away by O’Dell and Baldwin.

King is alleged to have told all the men who had been in the room during the beating to remove their clothing and burn it in a barrel, giving them replacement clothes afterward, according to the plea agreement.

The plea agreement does not specify where the Tahoe was driven or at what point Staton is believed to have died, except to say that “it was reasonably foreseeable that Staton was to be driven away to his death.”

There doesn’t appear to be any public mention of Staton’s killing before Wednesday, U.S. Attorney Bryan Schroder confirmed at a press conference. Staton is still listed as missing on the Alaska State Troopers’ missing persons website, on a bulletin that says he was last seen Aug. 2 and that “his family is concerned.”

“We keep that information close hold while we’re doing the investigation,” Schroder said.

When asked by a reporter what made Staton’s killing different from other homicides such that law enforcement wouldn’t make it public, Schroder said, “I don’t know that I can talk about that.”

A spokeswoman for the Alaska U.S. Attorney’s Office said the specific circumstances of Staton’s death, including where his body was found and who found it, are “not a matter of public record.”

In March 2018, a coroner filed for Staton’s unclaimed body to be disposed of, court records show.

The Nazi-affiliated 1488 gang has between 50 and 100 members in Anchorage, though officials said they didn’t know how many of those are incarcerated and how many aren’t.

An additional 14 people have also been indicted over their alleged involvement with the gang, officials said.

According to the plea agreement, O’Dell was initiated as a “full” 1488 member after Staton’s killing.

“Violence and unquestionable loyalty was the only ‘currency’ recognized by the gang for which a patch could be awarded," the agreement read.