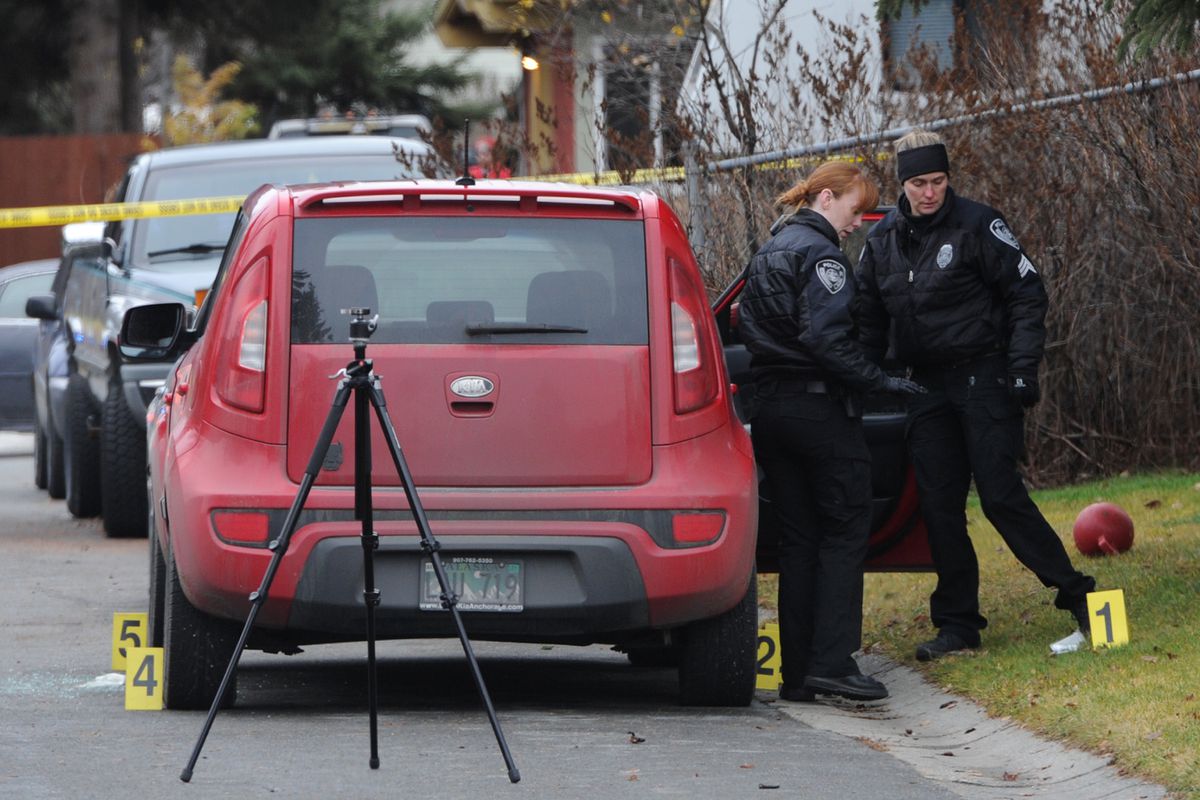 Two men are facing charges of murder and kidnapping in the death of a man found in a parked car in West Anchorage this month.

Police were called to the 4000 block of Merrill Drive around 1 p.m. Nov. 3 and found 48-year-old Oscar Garcia dead in a red 2012 Kia Soul. Garcia was in the passenger seat with a gunshot wound to his chest, according to charging documents filed in district court Wednesday.

Officers made their way into the locked car and found a spent shell casing, blood, a bullet fragment and possible drug paraphernalia, charges said.

The registered owner of the car told police a person had taken the vehicle and not returned it.

Investigators said the person led them to 27-year-old Rhadames “Nino” Marmolejos Jr. and 23-year-old Elijah “Thug” Ramirez. According to charges, the person who had taken the vehicle told police he drove with Marmolejos and Ramirez to a hotel to search for Garcia to settle a drug debt on Nov. 2. The person was driving when they found Garcia at another hotel and he got in the passenger seat, charges said.

Ramirez shot Garcia in the back multiple times when he was unable to settle the drug debt, the person told investigators. Marmolejos and Ramirez then turned the gun on the person and ordered him to drive out of the area, charges said.

They parked on Merrill Drive and got out of the car. The person who took the car told investigators that the two men tried to get him to go to the woods with them and one of them told him, “you know what time it is.” The person told officers he thought he was about to be killed, so he fled and hid at a local restaurant until friends arrived.

The police’s Investigative Support Unit found Ramirez and Marmolejos, and they were questioned by detectives. According to charges, Marmolejos confirmed that Ramirez shot Garcia over a $550 drug debt.

Marmolejos was released from prison July 19 and was on probation for a federal drug trafficking conviction. He was convicted in 2013 for selling large amounts of heroin to an undercover DEA agent.

Ramirez had outstanding warrants on charges of assault, misconduct involving weapons and coercion. According to an online alert issued by police, he was inside a house that was targeted for a shooting on Jan. 28, 2018. He ran from the house and fired shots at the vehicle that had opened fire on the home, the alert said.

Both men were arrested on warrants following the interview, and charges of first- and second-degree murder and kidnapping were filed against them Wednesday.

Marmolejos appeared in the Anchorage Correctional Complex courtroom Thursday afternoon. His bail was set at $250,000.

There have been 26 homicides in Anchorage this year, excluding three officer-involved shootings, according to police.