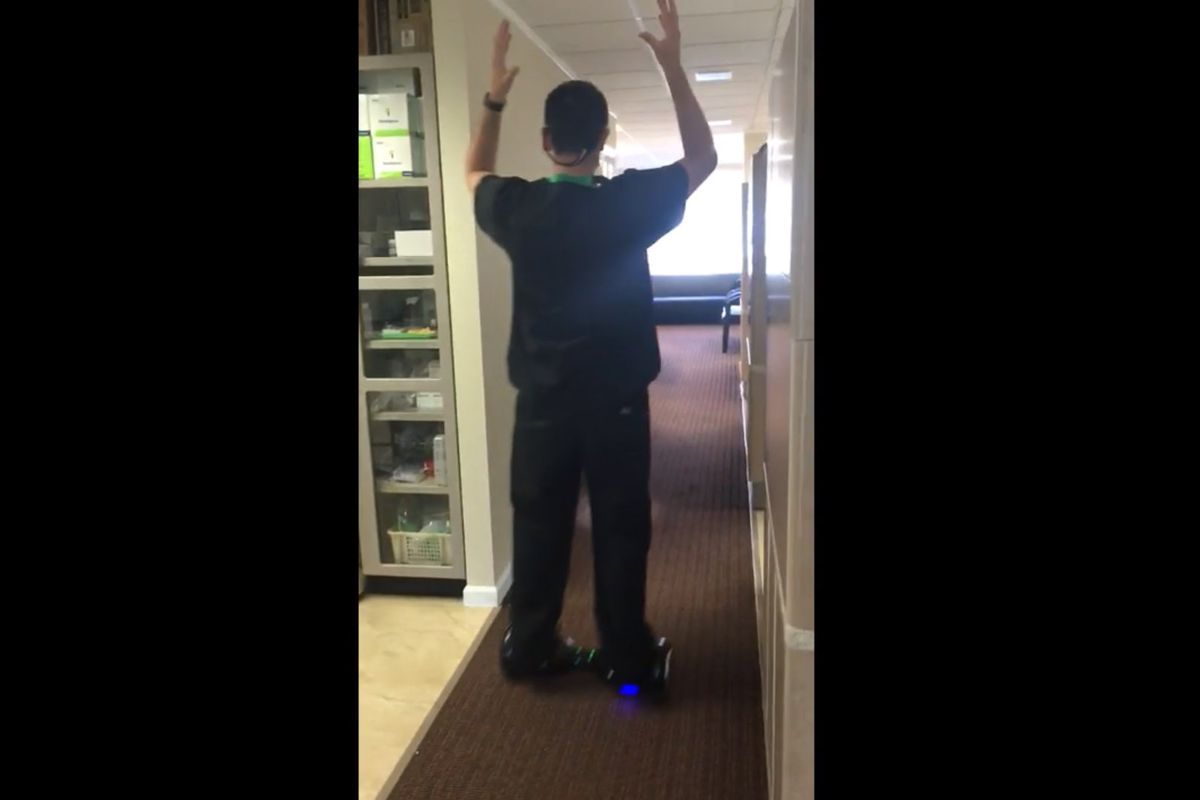 The defense attorney for an Anchorage dentist who was captured on video pulling a patient’s tooth while riding a hoverboard apologized Wednesday during trial for his client’s “idiotic" behavior.

“I want you to know that as his lawyer, I apologize for what he did on that hoverboard,” said defense attorney Paul Stockler. “It’s unacceptable and you can be assured that when I agreed to represent him, I got in his face and told him what I thought about him for doing this, which I think needed to be done.”

Seth Lookhart’s bench trial began Nov. 12. He’s facing 42 charges, including allegations that he unneccessarily sedated Medicaid patients in order to maximize Medicaid payments and rode a hoverboard while extracting a tooth from patient Veronica Wilhelm while she was sedated.

Lookhart was charged in April of 2017 and in June of that year the Alaska Board of Dental Examiners suspended his license to practice dentistry and sedation.

An employee had tipped Medicaid investigators that Lookhart was using intravaneous sedation more often than neccessary in order to bump up profits at his business, Clear Creek Dental. According to charges, he and his former office manager Shauna Cranford billed nearly $2 million in IV sedation without proper justification during 2016. That accounted for 31% of the state’s payments for IV sedation that year, charges said.

Investigators found text messages between Lookhart and Cranford that discussed plans to profit from IV sedation. Charges said text messages also proved Cranford, who is not a dentist, pulled teeth from a sedated patient.

Lookhart texted a video of himself pulling a patient’s tooth on a hoverboard to several friends and family, describing it as “a new standard of care,” prosecutors said.

That patient, Veronica Wilhelm, said on the stand Wednesday that she was “shocked, pretty livid — pissed off” when investigators showed her the video in which Lookhart glides into an exam room on a hoverboard, pulls her tooth and rolls out of the room, raising his arms above his head as he spins around in the hallway.

“I think you have to be pretty narcissistic, you must be pretty full of yourself to think you can pull someone’s tooth out on a hoverboard," she said.

After Stockler apologized to her, Wilhelm told Lookhart she forgave him. She said she was thankful her tooth was removed because it was a procedure she needed, but she didn’t understand why he endangered her during the extraction by riding a hoverboard.

“I have empathy. I feel for you,” she said as she looked back and forth between Stockler and Lookhart. “I think you could’ve made better choices. You went to dental school for I’m sure a long time and put in a lot of sleepless nights and lots of money that you’ve had to pay for all that and you probably could’ve been a really good dentist. ... I think what you did was outrageous, narcissistic and crazy. So, I forgive you for all that but there’s obviously a high-priced lesson that you’re going to have to learn.”

Stockler said after Wednesday’s trial had recessed that Lookhart shared his feeling of remorse.

“He knows he did that on the hoverboard, the question is what effect, if any, that should have on his dental license and whether that’s a crime,” Stockler said.

Two patients took the stand Tuesday to talk about dental procedures performed by Lookhart. One man woke up from sedation with four missing teeth and dentures fitted so poorly that he said they made it difficult to talk, eat or breathe. The other patient said he awoke from sedation on separate occasions to find a crown had been placed on the wrong tooth and a loose filling had not been repaired, but a different tooth had instead been filled.

According to charges, Lookhart “scheduled procedures that could have been completed in a single day over the course of multiple visits so they could bill for additional IV sedation procedures.” Medicaid pays $170.16 for 15 minutes of IV sedation, while local anesthesia, like nitrus oxide gas, costs a flat rate of $57, according to charges.

Stockler said he plans to prove to the court Thursday that not all of the Medicaid claims were falsified by Lookhart and Cranford by digging into the audit to determine who made edits on the varying claims. In some cases, he said, the Medicaid office entered the wrong dates on claims, which made it appear they were backdated when compared to medical records kept by Lookhart’s office.

“It makes a big difference in this case,” he said.

Cranford accepted a consolidated plea agreement on 40 charges in October.

Stockler said in an interview Wednesday that he believes Cranford “admitted to some things she didn’t do." Cranford has pleaded guilty to medical assistance fraud and practicing dentistry without a license. The agreement makes it so that Cranford acknowledges guilt in the remaining charges, but can only be sentenced on the two counts she entered a guilty plea for. She is scheduled for sentencing in February.