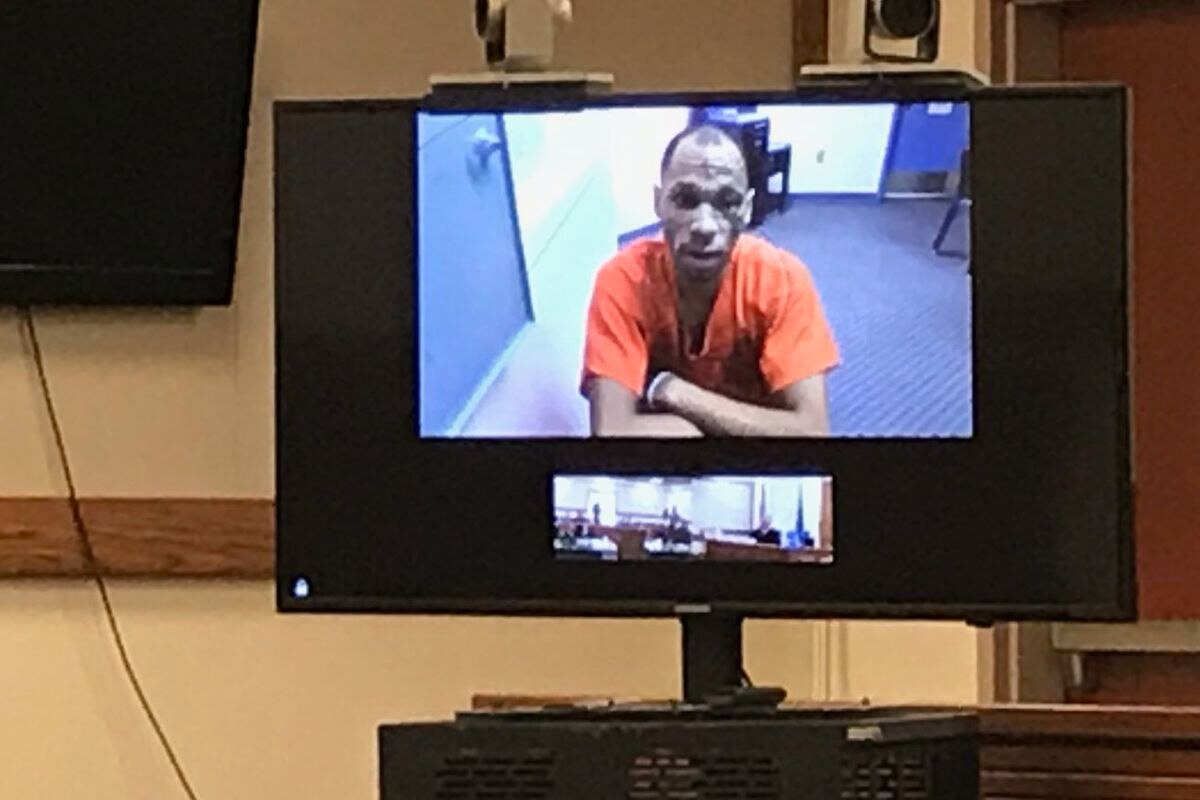 PALMER — One of three suspects in the violent beating of a couple near Wasilla last week repeatedly cursed at the judge at a bizarre court hearing Monday that was briefly interrupted by a power outage.

The men beat and stabbed a couple near Sylvan and Hollywood roads just outside Wasilla late last Thursday over accusations the couple stole from one of them, according to court documents filed with attempted murder, assault, robbery and kidnapping charges.

Gunfire during the assault peppered a house next door, grazing the head of a woman sleeping inside, according to the homeowner.

The woman in the couple was left with injuries described as life-threatening after receiving multiple stab wounds. She was found on the floor in a pool of blood, tied up, with wounds to her neck and body, according to a sworn affidavit filed with the charges by Alaska State Troopers.

The man was repeatedly beaten and also stabbed, the document says. He told investigators he had no idea what stolen “stuff” their assailants were talking about.

Smith, jailed at Mat-Su Pretrial Facility, appeared in court by videoconference during a hearing in Palmer Monday.

The bullets fired during the attack hit Holly Tingstrom’s house and her girlfriend was shot, Tingstrom testified during the hearing. The victim attended. She had a row of black stitches leading into her hairline.

Tingstrom asked Palmer District Court Judge William Estelle to set a high bail so the men didn’t get out of jail and come after them.

“My concern is these gentlemen – and I use that term loosely – getting out on bail…,” she said. “I do ask that you do not be lenient with these guys and that you set their bail as high as possible.”

Smith, listening via video conference, clapped sarcastically when she finished.

Estelle set Smith’s bail at $100,000 cash and ordered no contact with victims or the other defendants.

Assistant district attorney Brittany Dunlop referenced Smith’s three prior felony convictions in Anchorage — assault, failing to stop for an officer, escape — and six total assault convictions in describing her “serious concerns about the safety of the community."

The couple involved in the assault was identified only by their initials.

They rented a room from Williams until about a week before the crime, according to a sworn affidavit filed with charges by troopers Investigator Todd Moehring.

They were trying to help Williams through “a rough time with the house” but moved out because he “displayed erratic behavior and was unpredictable,” Moehring wrote.

That evening, the couple returned to the rental to get the last of their belongings, according to the document. A 2000 gold Chevrolet Tahoe was backed up to the door leading to the kitchen when they got there.

Williams, Smith, and Franklin were there along with an unknown woman and man, according to the affidavit. Smith confronted the man, putting a pistol to his head and demanding he get on the ground. Franklin, armed with a shotgun, grabbed the woman roughly.

The man moved to get Franklin to leave her alone and was hit twice in the face with the pistol, according to the document.

They forced the couple to the couch and Williams told the other two that he had a bunch of “stuff” stolen from him, the investigator wrote. “Smith told Williams, ‘we will get them to take us to the stuff.’ ”

The man, who had his hands and feet bound and face covered, was beaten with weapons numerous times trying to protect the woman, the affidavit says. “Smith and Franklin continued to ask Williams where the stuff was. Williams kept saying, ‘I know they got it, I know they got it.’”

The man was slammed to the ground, kicked and hit with the shotgun before being thrown in the back of the Tahoe where he could hear the woman being assaulted, according to the document. He eventually escaped, and Smith shot at him and missed, but one of the bullets penetrated the wall of Tingstrom’s home. Her girlfriend received a graze wound. The bullet lodged in her pillow.

The man was treated at Mat-Su Regional Medical Center for multiple lacerations, contusions, bruises and a stab wound to the chin, according to the affidavit. His girlfriend went to surgery for a possible skull fracture, and received multiple stab wounds to her neck and torso.

Franklin admitted he was there and was told to stand watch with the shotgun, but the “whole thing” was Williams’ idea, the document says. He has a 1996 conviction for manslaughter and assault.

Tingstrom said out of the three she knew only Williams, because he was her neighbor.

Smith took an attitude with the judge as soon as his hearing started. Estelle asked if he had a copy of the charging documents.

“Yeah I got a copy, s---,” Smith answered. The judge later asked his current mailing address. “I’m not going to give it to you,” he responded. Asked if he’d read the document, he said, “Yeah, I’m f---ed.”

Estelle told Smith he could face a 30- to 99-year sentence on the attempted murder charge. Smith, his hands in cuffs, raised the middle finger on both and looked straight at the camera.

A brief power outage, the second of the day for Palmer, suddenly darkened the courtroom as the shooting victim initially stood to testify and put the hearing on hold for about 30 minutes. She decided not to speak after the lights came back on.

His next hearing is Dec. 19. Williams and Franklin were scheduled to be arraigned Tuesday.