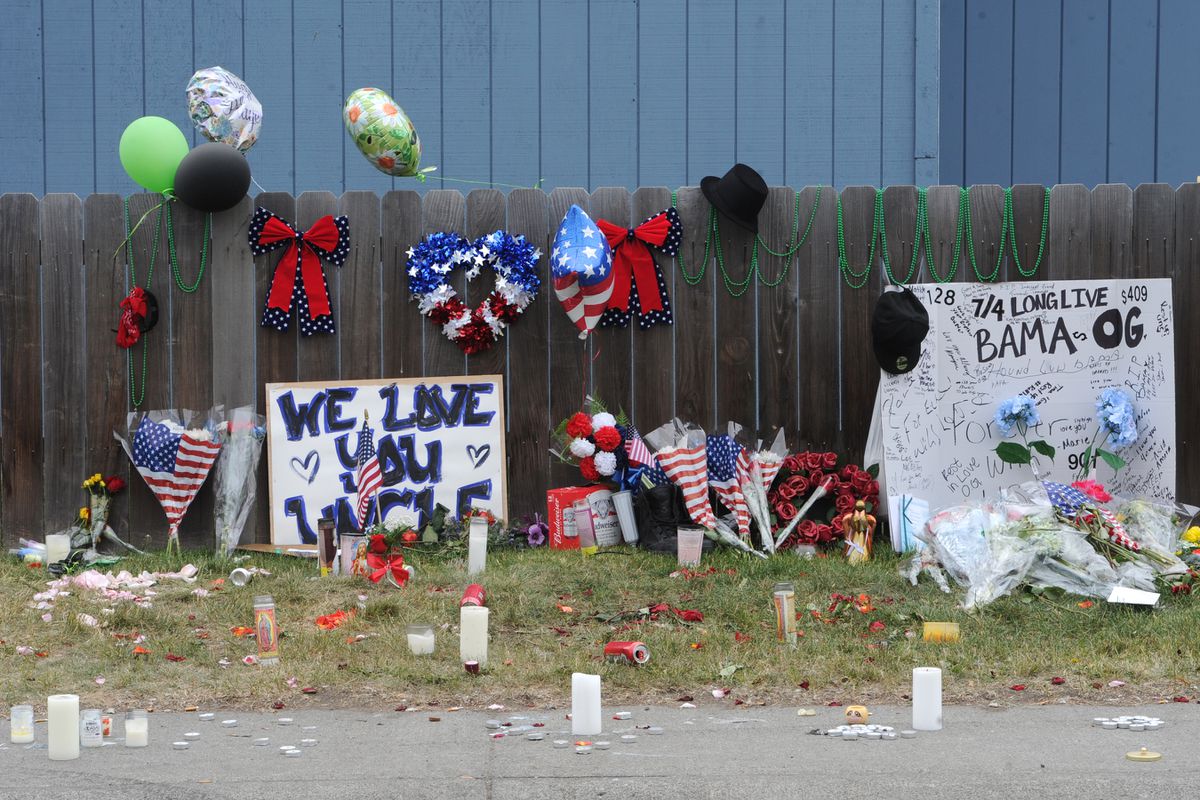 Memorial for Donald Jordan on Monday, July 6, 2020, who was fatally shot in Mt. View on the Fourth of July. (Bill Roth / ADN)

Memorial for Donald Jordan on Monday, July 6, 2020, who was fatally shot in Mt. View on the Fourth of July. (Bill Roth / ADN)

An Anchorage woman turned her gun on witnesses after she fatally shot a man in the Mountain View neighborhood on the Fourth of July, according to charging documents.

Sharlene Townsend, 48, is facing charges of first-degree murder, assault and tampering with evidence in the death of 66-year-old Donald Jordan.

Several witnesses told police Jordan was sitting in a chair next to a fence at 128 N. Klevin St. when Townsend walked up to him and said something they could not hear, according to documents filed Sunday. She then pointed a gun at Jordan and shot him, the charges said.

Multiple witnesses called 911 just after 7 p.m. to say a man “had been shot multiple times by a female wearing a light-colored floral dress,” the charges said. The witnesses tried to help the man, who had several gunshot wounds in the upper body, but he died after he was brought to a hospital, police said in an online statement.

Townsend had been driven to the area by another woman, who told investigators she saw Townsend point the gun toward other people standing nearby after Jordan had been shot. Townsend returned to the woman’s car and the two struggled with the gun as the woman tried to disarm Townsend, charges said.

The woman was unable to get the gun away from Townsend and told police that Townsend had threatened to shoot her and her children during the struggle.

Townsend got out of the vehicle and walked down Klevin Street, charges said. While police were on scene interviewing witnesses, Townsend returned about 30 minutes after the shooting and was pointed out by multiple witnesses.

Townsend was questioned by detectives and detained. The gun used in the shooting had not been found by police as of Sunday morning. A police spokeswoman did not provide an update Monday.

Flowers, Fourth of July decorations and a balloon sat along the fence Sunday afternoon where Jordan was shot.

Police did not provide details Monday concerning if or how Townsend and Jordan knew each other and what may have motivated the shooting.

It was the fifth homicide in Anchorage this year, not including one fatal officer-involved shooting.