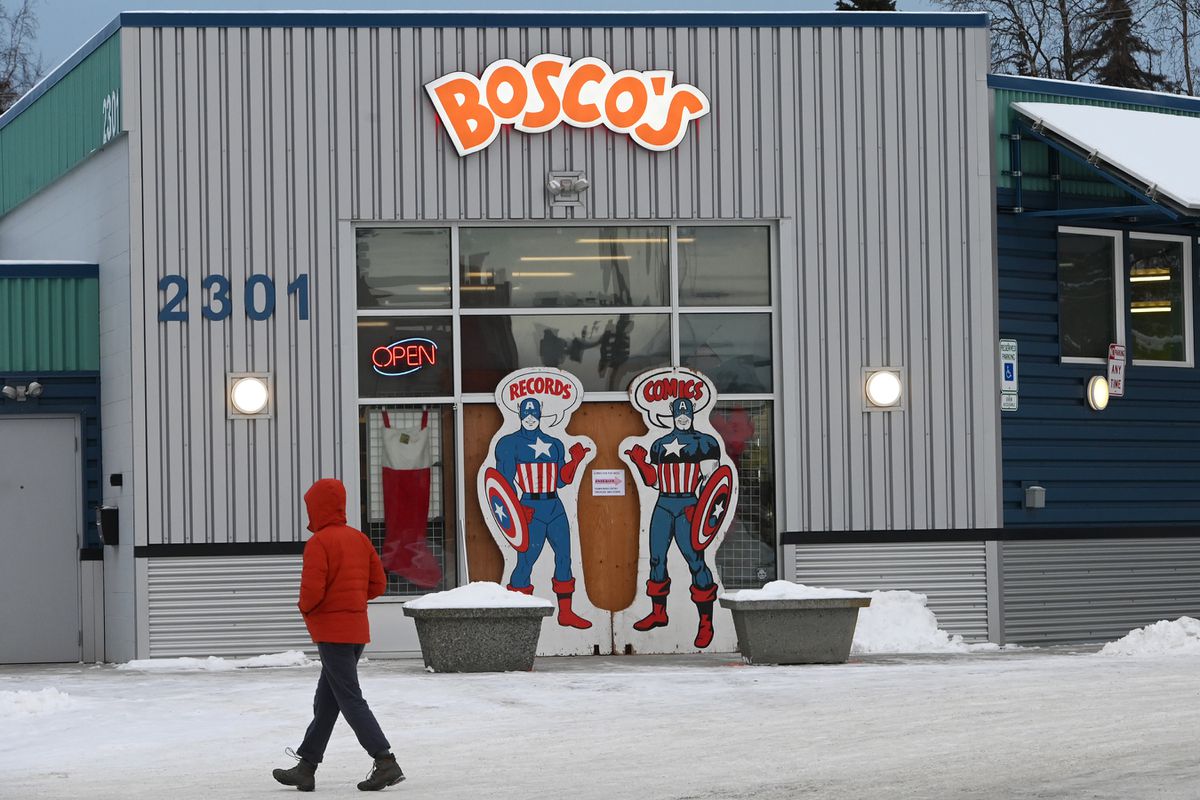 The front doors at Bosco's in Spenard are boarded up on Sunday, Dec. 6, 2020, after burglars drove through them and stole sports cards. (Bill Roth / ADN)

The front doors at Bosco's in Spenard are boarded up on Sunday, Dec. 6, 2020, after burglars drove through them and stole sports cards. (Bill Roth / ADN)

By the time John Weddleton made it to the Spenard comic book shop he owns early Saturday morning, red and blue lights illuminated the parking lot.

The alarm system at Bosco’s had gone off around 5 a.m., Weddleton said. He jumped out of bed and headed to the Spenard Road storefront. The business has been burglarized somewhat regularly throughout the last decade, he said. This time, however, a car had driven through the shop’s front doors, knocking the frames loose and shattering the glass.

We didn't intend on having a drive-thru, but we do offer curbside pickup. We realize everyone is eager to get into...

Weddleton said police told him the vehicle had been stolen. Surveillance footage from inside the shop showed three people jumping out of the car and dashing into the store. They left in a matter of minutes, grabbing sports cards before darting into a SUV across the street, he said.

“They clearly knew where they were going and what they were getting,” Weddleton said.

This is the third time this year that Bosco’s has been burglarized, Weddleton said. Weddleton, who represents South Anchorage on the Assembly, has ramped up security measures since the last break-in, which was in August. The store was actually scheduled to have steel collapsing gates installed on the other side of the doors that morning.

“They were scheduled to come at a 10 o’clock yesterday morning,” he said over the phone Sunday. “The break in was at 5, so they were about five hours too late.”

The burglary did not deter Bosco’s from opening — Weddleton said he has dedicated staff who came in early to help clean up. On Sunday, a large piece of plywood blocked the broken portion of the doors, with two cut-out Captain America figures towering over each side of the wood. Customers came and went through a door on the side of the building.

No arrests were made, but Weddleton said he feels grateful for the police department’s assistance and optimistic that they will find the offender.

The burglary comes during a year when many businesses have felt the economic impact of the COVID-19 pandemic. Weddleton said his business hasn’t been particularly hard hit, and he and his employees have been cautious not to spread the virus.

He said the store has shut down several times when an employee became ill, which he said he believes is a major concern for most small businesses.

Bosco’s has also paused all events in the wake of the pandemic, which Weddleton said has been difficult for many of his customers. The events “kind of defined who we are,” he said.

The shop used to host a Dungeons and Dragons game every Thursday. People would gather weekly for Pokemon, Magic the Gathering or Yu Gi Oh tournaments, along with dozens of other events.

“It’s a very different store without that stuff going on,” he said.

Many of Bosco’s customers are gaming more online, Weddleton said, but it’s not the same.

“It’s sitting down across the table that for a lot of people, that was a big highlight of their week,” he said. “It’s coming in, doing these tournaments with their pals. I think it is challenging for them.”

Weddleton said Bosco’s has otherwise been doing alright during the pandemic, but he feels for his fellow small business owners that have fared worse. Bars and restaurants have been hit particularly hard.

Weddleton said he wants to show his support for the local businesses and the community, so he started ordering lunch daily for his employees in August. The shop posts a photo of their feast on their Facebook page to help lift up the businesses around them.

“Presumably we’ll have less of a pandemic because of them all shutting down,” he said. “So we all kind of owe it to them, really, for taking the hit.”

Thanks go out to the gang at Spenard Roadhouse for sending the Spenard BOSCO'S crew pizza and tater tots. They have lifted our spirits and we are happily consuming mass quantities. #spenard

Anchorage businesses look out for one another, Weddleton said. A nearby glass repair shop in Spenard has worked with Bosco’s for years to help with repairs. Weddleton said the storefront will be back to normal in the next few days with their help.