Pain doctor defends his practice in effort to save his license 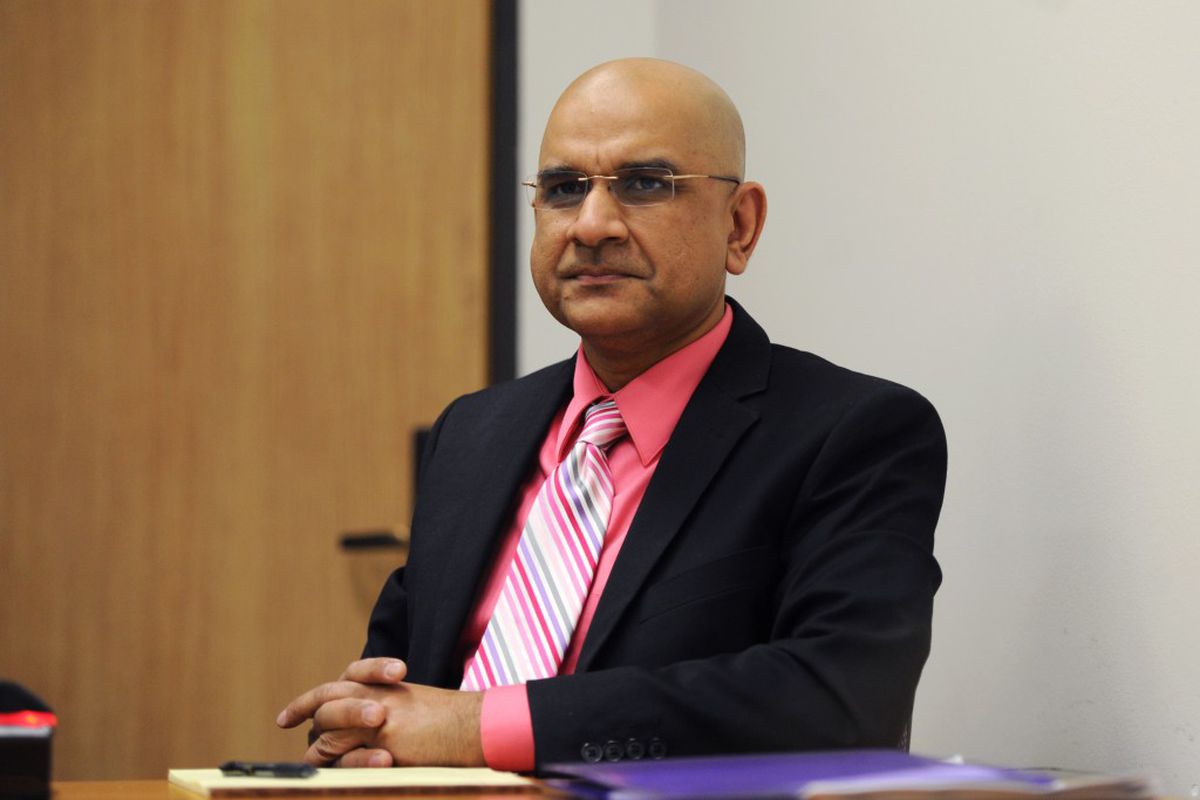 The doctor accused by the state of prescribing potentially deadly opiates to clients in Anchorage fought back Friday, saying that he safely meets the needs and concerns of his clients, even if they have to reach him by cellphone when he's at his other practices in Arkansas or Australia.

If Mahmood Ahmad was running a pill mill in Anchorage — prescribing narcotics for nonmedical reasons — then why has he refused to see more than 100 patients since he began operating in 2015, he wanted to know.

That includes more than 60 who would not meet with him as planned. He said he also refused to treat dozens of others because he thought they wanted opiates for the wrong reasons or because they wouldn't take the urine tests he requires.

"Those numbers refute that allegation of a pill mill," said Ahmad.

Now, Ahmad must fight to keep his license to practice in both states.

The case in Alaska before an administrative law judge may continue into next month. The judge could decide to recommend that the Alaska medical board revoke Ahmad's license or end the suspension, allowing him to continue his practice.

The state has argued that Ahmad has prescribed dangerous amounts of opiates to patients while giving vague diagnoses based on limited medical information. They said Ahmad practices in Alaska just a few days each month, preventing him from carefully monitoring his patients and their reactions to the prescriptions.

The case originated when pharmacists — some of whom refused to fill prescriptions from Ahmad's United Pain Care clinic — began complaining about the prescriptions to investigators with the state Division of Corporations, Business and Professional Licensing.

One pharmacist, from a Costco in Anchorage, said she and other pharmacists had difficulty reaching Ahmad with questions when patients sought prescriptions that appeared dangerous. That pharmacy and others refused to fill Ahmad's prescriptions.

But Ahmad on Friday said he's always available, unless he's on a plane traveling somewhere.

"All calls to me are forwarded to my cellphone anywhere in the world. I take my responsibility seriously," he said.

Ahmad, 52, said he attended medical school in Pakistan and moved to the U.S. in 1993 for his residency in anesthesiology at Yale University.

Now, he said, he spends once a week each month in Australia, where he has a pain clinic practice with a group of family physicians, and one week in Arkansas, where his home and another United Pain Care clinic are located. He said he reserves another week for meetings and conferences.

He also now spends one week each month in Alaska, where he has 149 active patients and hopes to expand a business that allows him to spend most of each month here, he said. He wants to eventually retire in the state.

Ahmad also had a practice in Dubai but said Friday he had discontinued that operation. The last time he went there was in December as things in Alaska were picking up.

On the stand, Ahmad described his philosophy of opiate-based pain management, in some cases presenting views that are the opposite of those of pharmacists who testified in the case, and of the state's expert witness, Dr. Brett Stacey, the medical director of the University of Washington Center for Pain Relief.

Ahmad said he may prescribe relatively high doses of opiates to some clients even though they haven't used opiates for several years. That's because they remain opiate-tolerant and won't benefit from lower doses.

But Stacey had said on Thursday that if someone previously took opiates but is not taking them currently, it's important that a doctor recommend much lower starting levels than Ahmad has recommended.

Ahmad said he has had no bad outcomes with his clients. He said he asks clients who receive high doses — such as 30 milligrams of oxycodone three times a day — to start slowly, taking only part of the prescription in the first few days and building up to the full dose after a week.

Well, what if someone didn't follow those instructions and instead took the full dose, asked Alaska assistant attorney general Robert Auth.

"The risk is overdose if they don't follow my instructions," said Ahmad. "That's why I tell them this is not candy."

Auth asked Ahmad how he knows his clients are following instructions.

Ahmad said he can tell how they're doing at their next visit.

An investigator with the division, Edward Riefle, said from the stand that the investigation into Ahmad is continuing.

During his testimony on Friday, Riefle said the Alaska State Medical Examiner's Office had provided an autopsy report on Wednesday showing that a woman who had been under Ahmad's care had died of "multidrug intoxication."

"She had several prescription medications revealed in her body," Riefle said, responding to a reporter's questions outside the hearing at the Atwood Building in Anchorage.

Riefle said the woman's death is still under investigation and he declined to  comment further.

Ahmad told a reporter he would not respond to Riefle's statement.

The state has also alleged that Ahmad spends little time with clients. A state investigator on Thursday had said Ahmad had seen 179 patients during a three-day visit to Alaska in December.

Ahmad on Friday said the investigator was wrong. Instead, he saw 179 patients over four days during that visit to Alaska.

After a 19-year career, Ahmad said, he can conduct a physical examination in five minutes to help determine what kind of pain a person is in.

He also requires a urine test to help screen out illegal drug users, and has potential patients fill out an eight-page questionnaire to assess their medical history, calling it the "most important thing in establishing a diagnosis."

Auth raised questions about Ahmad's strong reliance on people's self-reported opiate history, saying they might forget dosages and prescriptions they had been given five years ago. Isn't Ahmad taking a risk by not relying more heavily on objective medical information?

"I do take that risk but I know that most patients are not going to lie, this is their lives," he said.

A patient of Ahmad's appeared on the stand Friday, saying he has helped her with pain related to a tumor on her arm, pins in her hip and other problems.

The woman, whom attorneys referred to as Miss R to respect her privacy, said Ahmad's medication has allowed her to care for her disabled 36-year-old son.

"I can't do it without the medication," she said.