From Hmong to Sinhalese, over 100 languages are represented in Anchorage schools 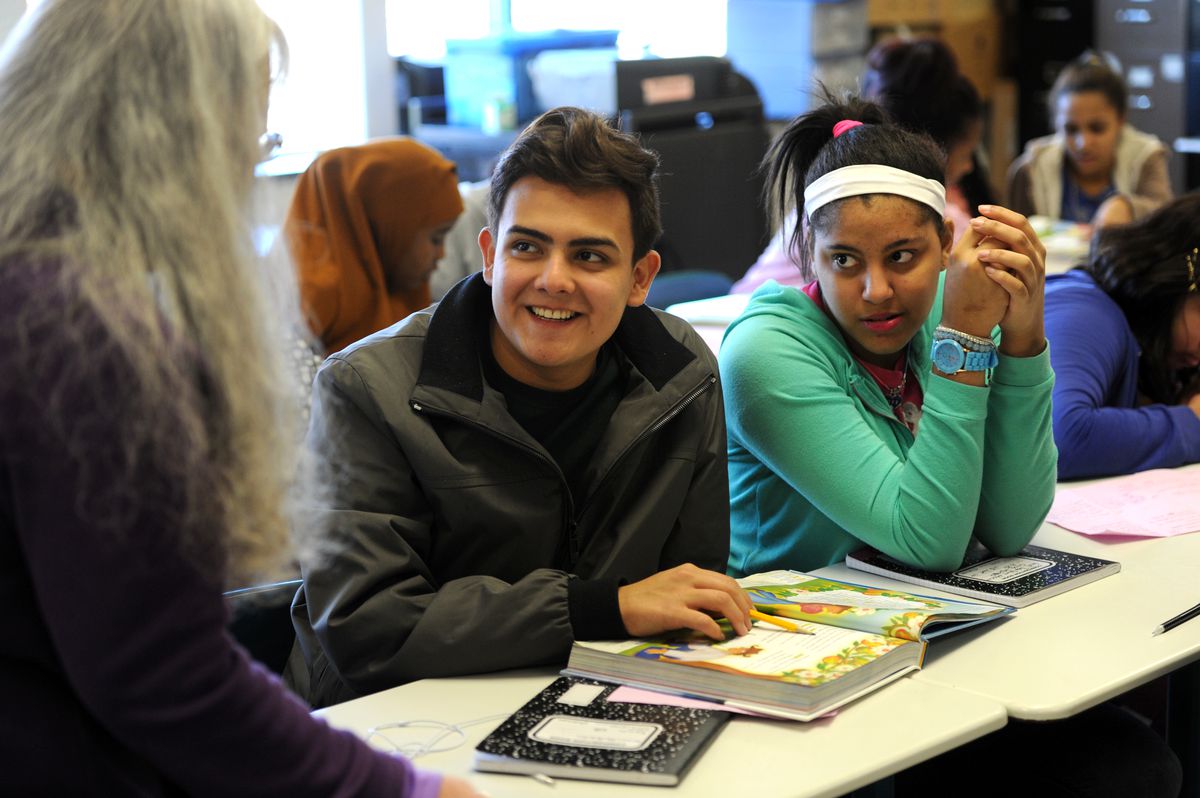 In an Anchorage School District classroom this month, teacher Bonnie Palach asked her 14 high school students where they were from. One by one they answered: Laos, Mexico, Guatemala, Ethiopia, China, Dominican Republic, Puerto Rico and so on.

The students were finishing lunch. A few scraped the remnants of applesauce from plastic containers. Others fiddled with their cellphones. A group of teenage boys in the front of the room talked in Spanish. American pop music played softly in the background.

The 14 students in Palach's class at the Newcomers' Center are some of the roughly 6,300 Anchorage students who are receiving support to learn the English language this year (also called "English-language learners"). That's about 13 percent of the total student body — slightly more than the national average.

This year, the Anchorage School District has tallied 107 languages either spoken by its English-language learners as their first language, or by the students' families. The list ranges from Spanish to Sinhalese, spoken in Sri Lanka, to Chichewa, spoken in parts of Africa.

The district calculates the number of languages in its schools by combining parents' answers on a one-time questionnaire about the first language their child learned and the language their family speaks at home.

While the resulting list of languages seems immense, researchers say it's not unusual for a district like Anchorage to have 90 or so languages spoken by its English-language learners.

Conor Williams, a senior researcher at New America, a think tank based in Washington, D.C., said that Spanish speakers typically make up about 75 percent of schools' English-language learner populations.

"There's very few schools where it's far and away Spanish," said Philip Farson, director of the Anchorage School District's English Language Learner (ELL) Program. "Generally, any school that has up to 60 or 80 ELL students has at least 10, if not 15, languages."

Farson sits in a unique position in the Anchorage community. Each year, he can watch the cultural shifts of a specific sliver of the city's population — families with school-age children — by adding up the languages recorded on the district's parent questionnaires.

It's an imperfect count and the questionnaires are only filled out by parents once. The School District does not track what languages each student in the district currently speaks.

"There seems to be an increasing number of Polynesian families in Anchorage," Farson said from his office at School District headquarters, as he looked over language data. "And I think there's still some growth with the Hmong community."

Farson, who has worked at the district since 1997, said he has watched the composition of Anchorage schools' top-10 languages change over time, as people flee war-torn countries or as cultural communities establish a foothold in Anchorage, and their families move north to join them. Sometimes, it's hard to keep up, he said.

"When I was a teacher, we tried to get grants to get books in the languages of the groups that were coming in, but we found that by the time we got the grant, acquired the books, that group had almost moved on," he said. "And now we're dealing with the next wave of languages that weren't in our top 10."

For Palach, a teacher at the Newcomers' Center, the diversity of languages in Anchorage means she can't simply teach English by translation. She doesn't translate words into Spanish, because it's not fair to her entire class, she said. Instead, she makes it a point to speak English slowly and enunciate each syllable.

The Newcomers' Center serves students new to the United States who need to learn English. It opened in 1997 with 11 newly immigrated students who all spoke Spanish, according to an Anchorage School District memorandum from 2000.

New languages quickly emerged as the number of students at the Newcomers' Center grew.

After not reporting any Hmong speakers for three years, the Anchorage School District said it had 95 students who spoke Hmong in the 1998-99 school year. By the next year, that number ballooned to 170, according to the memorandum.

Farson said he observed with Somali speakers the same thing he saw with Hmong speakers: "You get a couple of families that form a nucleus here and then you get all of the family networks."

Over the years, Farson said, he has seen the number of Somali speakers "going up, up and up." He has also watched the number of African languages spoken here diversify. This year, the School District recorded a few speakers of a handful of languages from Africa including Wolof, Mandinka, Chichewa, Hausa and Yoruba.

About once every year, Farson said, he'll read a language listed on a parent questionnaire that he knows nothing about. That happened when he first read Triqui, an indigenous language from Mexico.

"We were puzzling over, 'Where in the world is Triqui from?' " Farson said. "And then we're wondering, 'What is their story behind coming here?' "

This school year, six parents have identified Triqui as the language in which they want to be contacted, according to district data. To communicate with parents, the School District has three main sources for interpreters, Farson said.

"We strongly discourage using your child as an interpreter because of the power issues that come in," he said.

The Anchorage School District employs some English-language learner staff members who are bilingual and who can serve as interpreters as needed for some languages, though that's not their main job. The district also has a contract with the local Language Interpreter Center at the Alaska Institute for Justice, a nonprofit agency that provides low-cost immigration legal assistance to immigrants and refugees. The third option is tapping into a national telephone bank of interpreters.

Katie Bisson, the School District's English-language learner parent liaison, said that among all three options, school staff can usually find an interpreter. Still, the district sometimes struggles with a few, like Triqui.

While the telephone interpreting service has a Triqui speaker, Farson said that person is not available 24 hours a day, which can pose problems.

In July, Farson said, the district had a family registering who spoke Triqui but the district couldn't find an interpreter. The mother, he said, spoke some Spanish, so that's the language they had to use.

"It was less than ideal," Farson said.

While current estimates put the Anchorage School District's English-language learner population at about 6,300 students, Farson said he estimates that roughly 4,000 additional students have some language other than English in their backgrounds, judging by answers on the parent questionnaires.

Madeline Mavrogordato, an assistant professor at Michigan State University, said Anchorage's language count isn't necessarily unique. She typically sees a broad diversity of languages at school districts in or around major cities. Since Anchorage is the most metropolitan area in Alaska, she said, the number of languages spoken doesn't seem particularly unusual.

Of Anchorage's 48,000 students this school year, about 200 are refugees, Farson said. (Individuals can maintain refugee status for up to five years, he said, and then they're eligible for citizenship.)

Mara Kimmel, a university professor, former immigration attorney and Anchorage's first lady, said when it comes to the drivers of Anchorage's diversity, she has observed people coming to the city for family and for work. Until recently, Alaska's economy has been more stable than in other places, she said.

"We've always been an incredibly diverse community," she said.

For years, the Anchorage School District has recorded dozens of languages spoken by its English-language learner students. Some 55 different languages were spoken as early as the 1987-88 school year. That number grew to 87 by 1998.

"If you just tilt your axis and the way you look at the world, we are more centrally located," Kimmel said. "People like to think about this as a remote outpost, but we're really not."