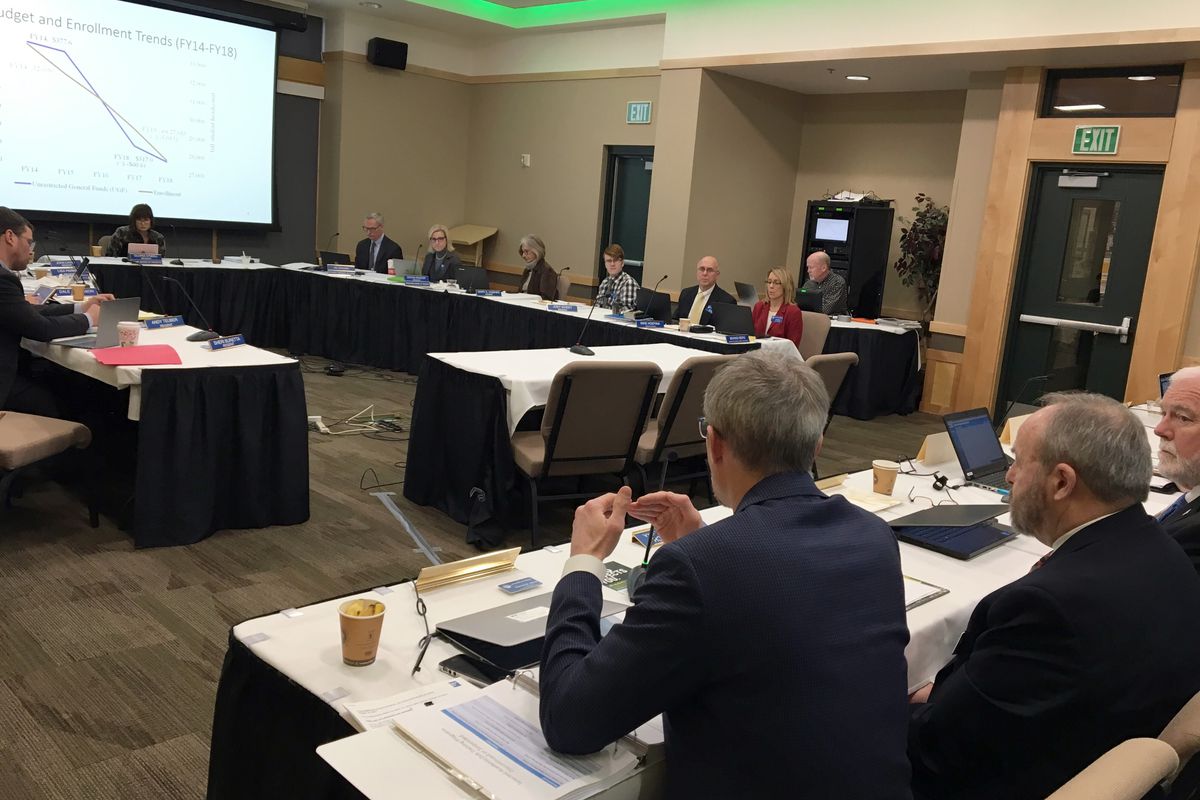 The University of Alaska Board of Regents on Thursday approved an operating budget request for next academic year that relies on more money from the state and from students.

From Alaska legislators, UA officials are asking for $341 million in funding for the public university system's 2018-19 operating budget.

It's about the same amount they asked for last year and didn't get. Instead, lawmakers agreed on an operating budget that included $317 million for UA — $60 million less than four years ago.

UA President Jim Johnsen said the university system needs the $341 million in state funding so it can rebuild its capacity and grow. In the past four years, UA has cut 1,183 positions and its enrollment has shrunk by roughly 5,000 students, he said.

"In order to grow this university and serve the state, we need the resources — we need the investment," he said.

To further raise revenue, the UA Board of Regents on Thursday also approved tuition increases for both the 2018-19 academic year and the year after.

Students' tuition will increase by 5 percent in each of the next two years at most campuses, including those in Anchorage, Fairbanks and Juneau.

At Kodiak College and Prince William Sound College in Valdez, students taking lower-division courses will face greater tuition increases — 10 percent in 2018-19 and 9.5 percent in 2019-20, bringing the tuition costs up to par with the other campuses. (That does not take into account student fees.)

Stephen "Joey" Sweet, the student representative on the UA Board of Regents, said that while he was "not thrilled" about raising tuition, the increases were the "responsible course of action."

"Although it's a sort of a bitter pill to swallow, I honestly believe that what's best for the institution is to support this increase," he told regents during their daylong meeting in Anchorage.

The Coalition of Student Leaders, which represents students across UA, passed a resolution earlier this year supporting smaller tuition increases than the ones approved by the regents.

The coalition's resolution said repeatedly raising tuition would not fix "the greater problem of revenue loss through decreased student enrollment."

During Johnsen's presentation to regents, he said UA's four-year in-state undergraduate tuition remained low compared to universities in the 14 other western states that also belong to the Western Interstate Commission for Higher Education.

In 2016-17, an in-state undergraduate student at UA paid $7,223 in tuition and fees compared to the average $8,211 across the western states' schools, according to the commission.

While the average tuition at the western states' universities went up by 87 percent between 2006 and 2016, UA's tuition only increased by 63 percent, according to the commission.

The tuition increase next academic year could raise an additional $5.7 million or so in revenue, depending on enrollment, according to Johnsen's budget presentation.

In total, the 2018-19 operating budget request approved by regents amounts to nearly $919 million, $341 million of that in state funding.

It does not include any raises for faculty or staff.

It does include about $6 million for increasing fixed costs, including utility bills, according to the presentation. It also includes $14.7 million for "strategic investments," including growing "world-class research," increasing the number of students graduating with degrees and "contributing to Alaska's economic development."

Johnsen said he believed those investments would generate an additional $15 million in revenue. He said that estimate was "conservative."

Regents also passed a capital budget request on Thursday that included $50 million in state funds, up from the $5 million it received earlier this year.

Rep. Adam Wool, a Fairbanks Democrat who serves on the House Finance Subcommittee for UA, said in an interview Thursday that if it were up to him, the university system would receive the funding it asked for — "that's a no-brainer."

But given the state's budget crisis and how the Legislature has funded UA in recent years, he said, it seemed unlikely UA would get all of the money it asked for.

"If I'm a betting man, do I think they'll get the money?" he said. "Based on past performance, I'd say no."

Members of the Senate majority who sit on the Senate Finance Subcommittee for UA could not be reached for comment Thursday.