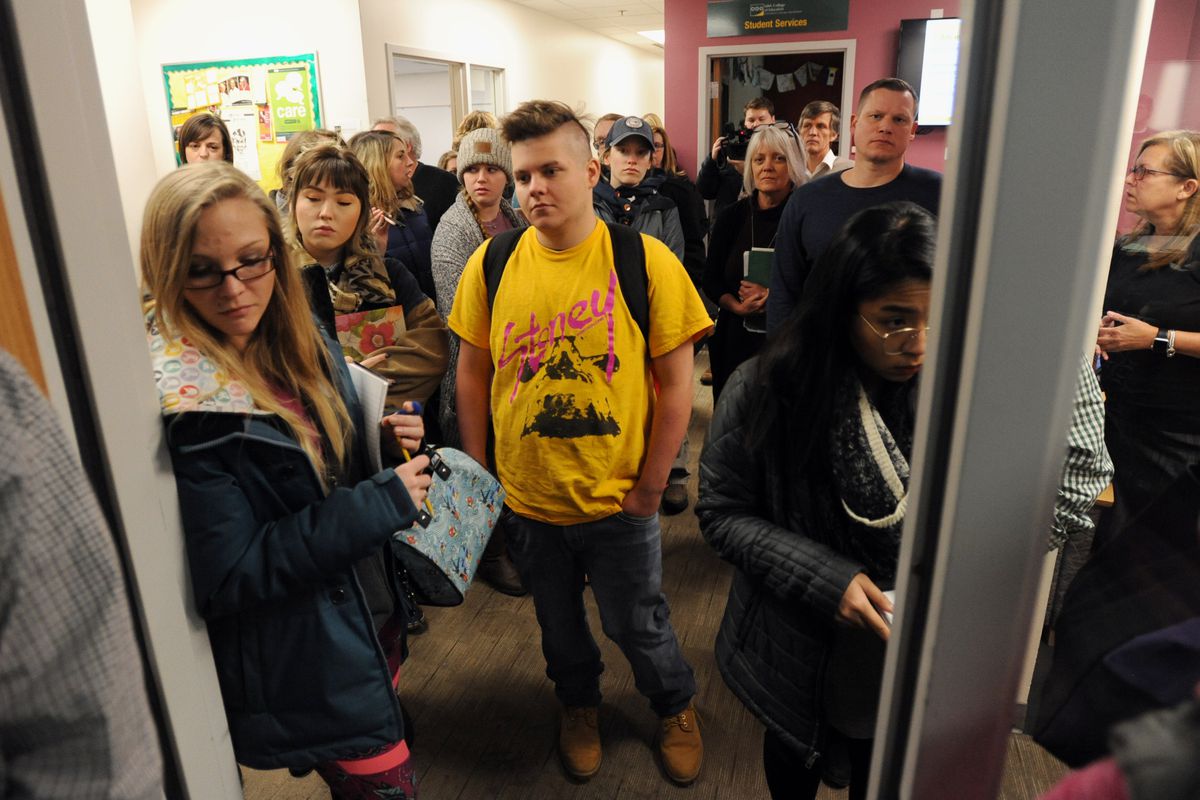 Students stand outside a classroom on Monday to hear University of Alaska Anchorage Chancellor Cathy Sandeen and UAA School of Education interim director Claudia Dybdahl speak about the School of Education's loss of accreditation for its initial licensure programs. (Bill Roth/ ADN)

Students stand outside a classroom on Monday to hear University of Alaska Anchorage Chancellor Cathy Sandeen and UAA School of Education interim director Claudia Dybdahl speak about the School of Education's loss of accreditation for its initial licensure programs. (Bill Roth/ ADN)

A national oversight body has revoked the accreditation of the University of Alaska Anchorage’s teaching degree programs, throwing the viability of hundreds of aspiring teachers’ degrees into question and casting an unflattering light on the university.

Administrators tried to reassure students at a tense meeting Monday that the School of Education is working on a fix and that they should keep studying — and paying tuition — toward their degrees in the meantime.

“To put so much work into it and for it to be like this might not matter anymore — I mean, I just want to cry,” said Jessica Beers, a junior studying early elementary education.

The decision was a surprise, said College of Education interim director Claudia Dybdahl.

“This is an unfortunate thing,” said Chancellor Cathy Sandeen.

CAEP is an organization that accredits college-level teacher preparation programs nationally. It has accredited 196 programs, according to the organization’s spokesman, Matt Vanover.

Four programs, including UAA’s, have had their accreditation denied or revoked, he said.

The revocation means UAA can still graduate students and degrees in those programs, said Sandeen.

But without accreditation, the university is not allowed to recommend students to the state of Alaska for licensure -- and teachers must be licensed to teach in Alaska public schools and almost everywhere else.

The Alaska Board of Education could make an exception and allow students from the programs without accreditation to be licensed anyway, said Dybdahl.

That’s what the university is hoping for, she said. Administrators will be presenting their case, including evidence of recent improvements, to the board on Jan. 22, she said.

Another option would be for the state board to allow the students already in the program to be recommended for licensing once they graduate — but to tell UAA to stop enrolling new students.

The worst-case scenario: Students graduate with degrees that don’t allow them to become licensed teachers.

The Board of Education is “very concerned” about the loss of accreditation, wrote chair James Fields in a statement.

It will meet in the future to make a decision, he wrote.

“The State Board of Education will be mindful of current UAA students, the money they have invested in the program, and how to support these educators in becoming the best teachers and administrators possible for Alaska’s K-12 students,” Fields wrote.

Many said they were worried degrees coming from an unaccredited program would put them at a disadvantage, especially when applying for teaching jobs outside Alaska. Others questioned why the news about the accreditation came so suddenly, after hours on Friday. Some wanted to know whether they’d be charged full tuition for their program that is no longer accredited.

Sofie Riley, an elementary education student who also competes on the UAA gymnastics team, said she was considering whether she could finish her degree at UAA if the program was not accredited.

Everyone wanted to know: Why didn’t UAA meet the standards? The problem lies with data, said Dybdahl.

CAEP is a relatively new accreditation standard, and it is known for its rigor and focus on data.

“They really focus a lot on assessments and data. And we didn’t really have enough data, consistent data and analysis of data to meet their criteria,” said Dybdahl.

One example: Student teachers are evaluated through a method that has been in use at UAA for a “very long time.” The new standards require that such instruments meet a high standard of validity and reliability.

Many of UAA’s methods “just didn’t meet that statistical standard,” in part because the numbers involved are relatively small, Dybdahl said.

In one year, UAA can try again for the CAEP approval. Dybdahl and Sandeen said they were confident the university would meet the standards.

Beers, the aspiring special education teacher, said it had been hard enough to get her degree.

“I raised two special needs kids I just gained custody of a few years ago, going to school and still having to work,” she said.

The uncertainty — even if for a few weeks, until a state board decision — was enough to make her wonder if she should quit classes for the semester.

“Is it even worth taking classes right now? Should I even risk taking them? Will they count?” she said.