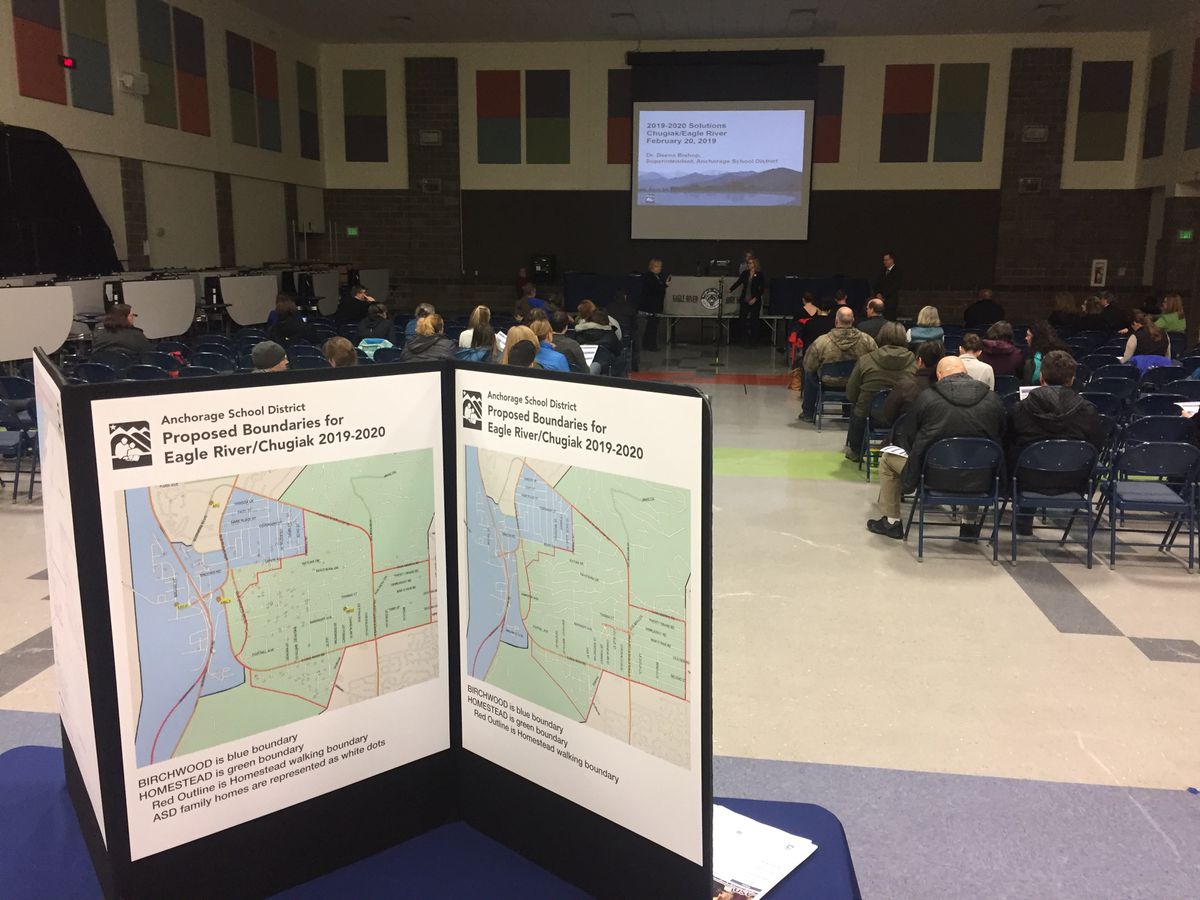 Parents listen to a presentation by Anchorage School District officials about plans for elementary and secondary students in Eagle River for the 2019-20 school year during a public meeting Wednesday in the Eagle River High School cafeteria. (Matt Tunseth / Chugiak-Eagle River Star)

Parents listen to a presentation by Anchorage School District officials about plans for elementary and secondary students in Eagle River for the 2019-20 school year during a public meeting Wednesday in the Eagle River High School cafeteria. (Matt Tunseth / Chugiak-Eagle River Star)

Redrawn school boundaries, relocatable classrooms and the continued combination of a middle and high school are among the Anchorage School District’s preferred options for a pair of earthquake damaged schools in Eagle River.

The district unveiled its recommendations Tuesday and Wednesday during meetings with the Anchorage School Board and the public in Anchorage and Eagle River. The plans include redrawing elementary school boundaries to accommodate displaced Eagle River Elementary School students and keeping Gruening Middle School students at Chugiak High.

The district has also released the results of an online survey and public comments about the plans taken last week.

Superintendent Deena Bishop joined district officials, school board members and elementary school principals for a presentation Wednesday night in the Eagle River High School cafeteria to discuss the recommendations. She acknowledged the plans might not be the best option for everyone, but the district believes they’re the most cost-effective and least disruptive to all parties.

At Gruening, the recommendation for 2019-20 is simpler: Maintain the status quo by keeping Gruening students at Chugiak High. That was the most preferred option on the district’s survey — which did not include a much-discussed option to house Gruening students at Eagle River High while combining Eagle River High and Chugiak High on the Chugiak campus. Combining high schools was the top public comment, according to the district. However, the local school communities have been sharply divided on the issue, with the second-most frequent comment being not to combine the high schools.

District officials said Wednesday that’s a long-term possibility but wouldn’t be feasible for 2019-20.

“That does not mean that cannot be a long-term conversation,” said ASD deputy superintendent Dr. Mark Stock.

The district’s recommendations are contingent on board approval. The school board will take public testimony on the issue at its March 4 meeting and make a final decision on the plans March 18.

The district has not yet taken up the long-term planning for how to handle the hundreds of students attending school at other campuses in Chugiak-Eagle River. Students from Gruening have been going to school at Chugiak High, while Eagle River Elementary students have been split by grade level between Ravenwood, Birchwood ABC and Homestead Elementary.

It’s unknown when — or if — Gruening and ERES will ever be occupied again. The district said it’s hoping to have engineering reports back on the schools by the beginning of March.

Wednesday’s meeting included an open forum in which elementary school parents asked whether the “short-term” solutions were really going to turn into long-term fixes and questioned the district on how specifically the moves would work. For example, Birchwood ABC (Anchorage Basic Curriculum) has a highly structured program where students are expected to say “please, thank you, yes ma’am, no sir,” and parents wondered how the integration of new students into the mix would work. Other parents said they worried about class sizes at the schools set to take in Eagle River students.

District officials said that in many cases, the specifics are still being worked out, but they assured parents they’re working with school principals to make transitions as smooth as possible. If parents want more options, they can also apply for zone exemptions or enter the district’s school lottery by the March 22 deadline.

“Those are still possibilities for people,” Stock said.

Bishop said no full-time positions will be cut and that student-teacher ratios will remain the same, though some teachers will have to move to different schools.

“We put the teachers where the students are,” Bishop said.