Devoted to its run-down schoolhouse, Anchorage charter school looks to taxpayers for repairs 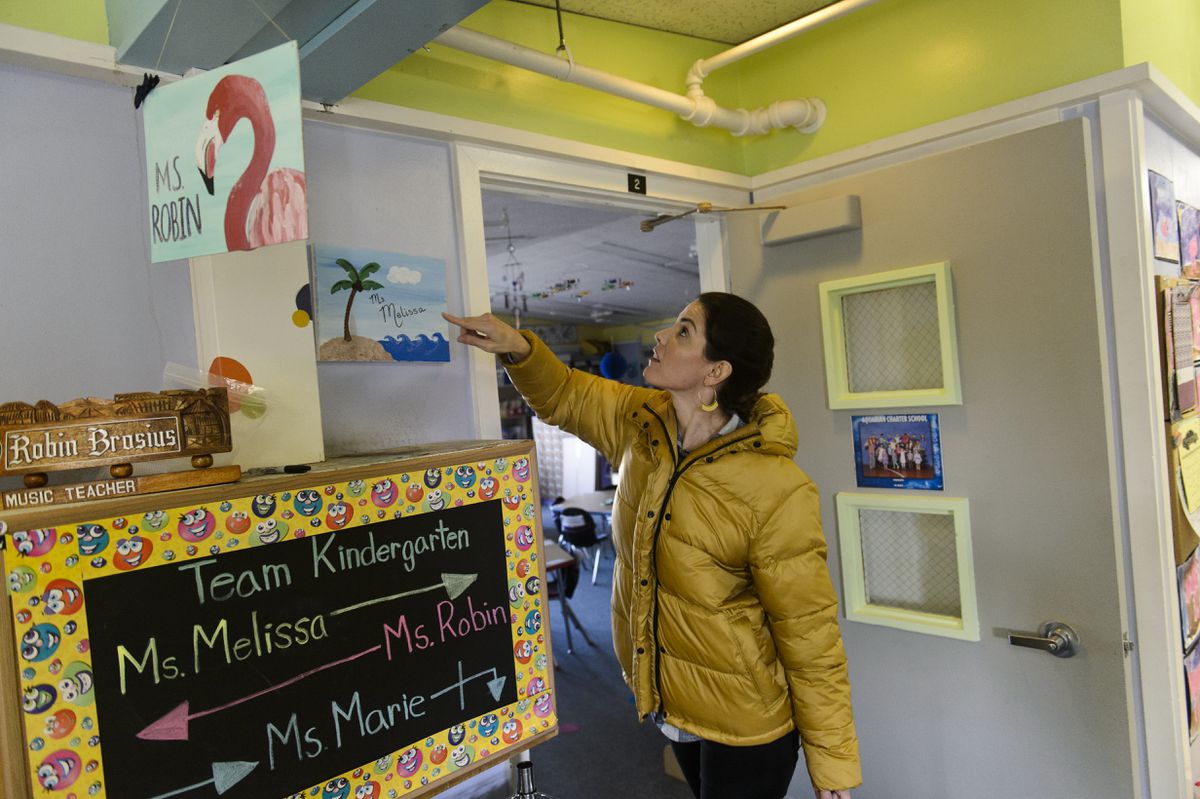 Mera Matthews, chair of Aquarian's long-term planning committee, shows one place where water leaks into the school on October 25, 2019. Aquarian Charter School leadership groups are asking the Anchorage School District to include repairs to its Spenard building in a future bond. Aquarian’s building is owned by the school district. (Marc Lester / ADN)

Mera Matthews, chair of Aquarian's long-term planning committee, shows one place where water leaks into the school on October 25, 2019. Aquarian Charter School leadership groups are asking the Anchorage School District to include repairs to its Spenard building in a future bond. Aquarian’s building is owned by the school district. (Marc Lester / ADN)

Some days, kids at Anchorage’s Aquarian Charter School complain that the building smells like dead animals. On others, teachers have to rush to move books because it’s raining.

The smell is a telltale sign of a boiler on its last leg. The indoor precipitation is due to a leaky roof.

The Anchorage School District estimates the new boiler, roof and other needed fixes will cost about $10 million. District officials and parents agree the fixes are needed. The question is who pays for it.

Aquarian wants to be the first charter school to go on the Anchorage School District’s bond package, which will be put before voters in April. Its parent-led governing board argues that since it is in a school district building, it shouldn’t be on the hook for repairs.

“It’s a small school in a funky building, and we love that,” said parent Mera Matthews. “We’re not asking for anything big and fancy.”

The Anchorage School Board will have to decide whether it’s appropriate to put Aquarian on the bond. The other eight charter schools in the district use a significant chunk of their operating budget on rent, while Aquarian is able to invest those funds back into the curriculum or savings.

Next week, the Anchorage School Board will discuss whether to add the $10 million for Aquarian to the bond. The bond proposal is now at $80 million, mostly for repairs related to the Nov. 30 earthquake. The board will vote on the issue in the coming months, and then the Anchorage Assembly will have to approve the proposed bond before sending it to voters in April. If approved, property taxpayers will fund the upgrades, rather than Aquarian or the school district.

(Bonds are a way a school district or local government raises money for repairs or other capital expenses, similar to a mortgage or loan. Voters authorize a certain amount of bonds to be sold to investors, and the principal is repaid with interest over time.)

Alaska’s charter system is unique in the United States because the schools are completely publicly funded. Each charter’s budget is supposed to cover everything, including rent. Eight of the Anchorage school district’s nine charter schools rent from a private landlord.

In 2000, Northern Lights Elementary outgrew its building in Anchorage’s Spenard neighborhood. The district offered the space to Aquarian, which was looking for a location to start its charter.

The school consists of a handful of modular buildings cobbled together. But it fared well in the November earthquake and the community is attached to the space, Matthews said. It’s on municipal land and holds the neighborhood’s only playground.

On a tour of the building, Matthews, chair of Aquarian’s long-term planning committee, pointed out the maintenance issues.

The leaky roof has damaged walls and beams throughout the school. When it’s rainy, trash cans and buckets are a mainstay in the hallways and gym.

“It is a wood-framed building,” said school board member Andy Holleman. “Longer you have leakage, the more damage you will have.”

Finally, in the two back-to-back staff bathrooms is what Matthews calls the “toilet teeter-totter.” When someone sits on the toilet in one bathroom, the toilet in the other bathroom raises slightly, creating a playground effect when both are in use.

Despite the blemishes, parents like the building, Matthews said. They aren’t the only ones. Aquarian’s wait list of 642 kids is almost double its enrollment.

“It’s this ugly little school that everyone wants to go to because they do really great things there,” said Anchorage Assembly member Kameron Perez Verdia, whose district houses Aquarian.

Originally there wasn’t a lease, but from 2009 to 2014 the district charged a flat fee of about $130,000 per year. A 2014 law mandated that districts charge charters actual costs for rent and operations. Since then, Aquarian has only been billed for maintenance. Aquarian declined to sign an agreement with the district placing maintenance responsibility on the school.

Roth said the district never intended to be on the hook for maintenance, but that hadn’t been specifically laid out in written agreements.

“The other option that they have, they could start to do what several of the other charter schools have done, and that is to look at an alternative location," Roth said.

By being in a district building, Aquarian can spend more money in the classroom than other charter schools. For example, Roth said Alaska Native Cultural Charter School has 318 students and spent $709,000 on rent and maintenance last school year. Aquarian has 384 students and spent less than half that on maintenance: $344,000.

“They are more able to invest a larger percentage of the budget into their programs, compared to some of the other schools,” he said. “It’s a choice. They choose. They have the ability to spend money. There’s no reason to disparage or hold that against the program. It’s just a fact.”

Roth didn’t speculate on how voters will view that in light of Aquarian asking for more public money to fix the building.

But Matthews, the Aquarian parent, said it’s a fair question.

“I understand the argument there, but we are just in a completely different rubric than those other schools,” Matthews said, adding Aquarian decided to value curriculum over a fancy new building.

Even if the school board opposes the idea, Aquarian might still have a shot at getting repair funding from the bond. Recently, the Anchorage Assembly asked its attorney, Dean Gates, to look into whether it can amend the school district’s bond proposal to add Aquarian’s $10 million, even if the school board votes against it. Gates hasn’t given them an answer.

Either way, Roth said, Aquarian will have a home, whether in its current building or elsewhere.

“No matter what the outcome, that program will endure,” he said.