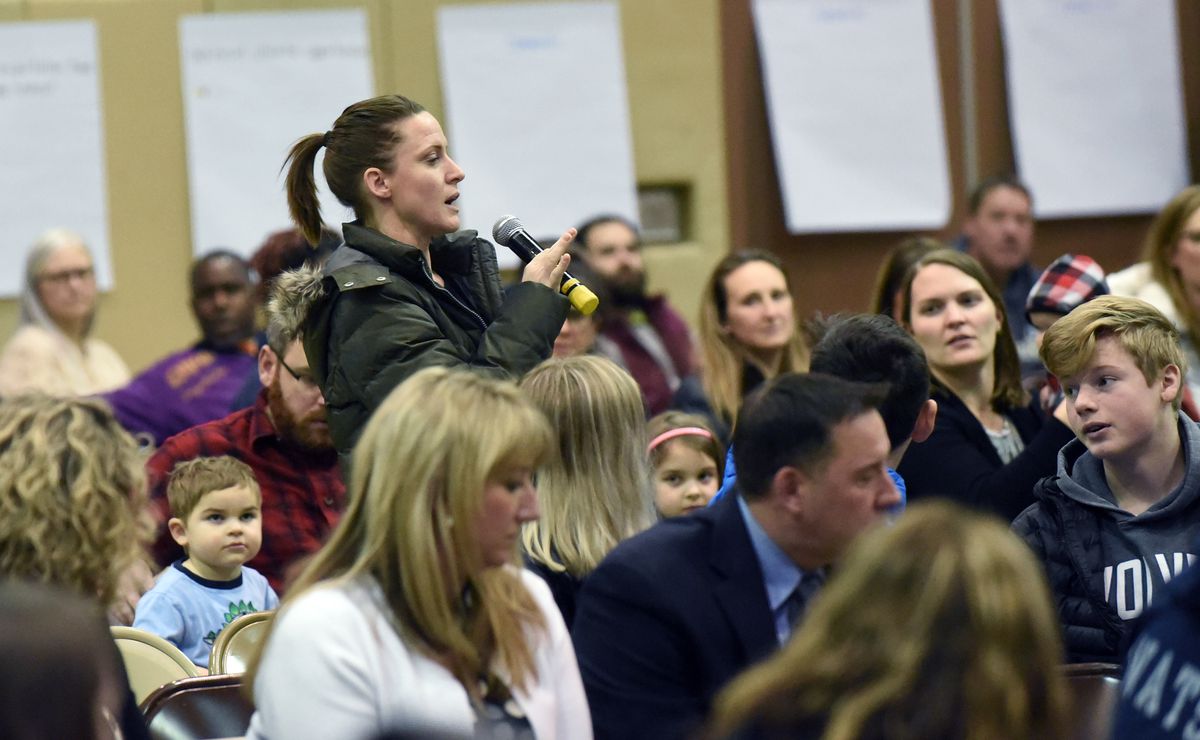 Not everyone went home happy, but all drove the same roads home.

A highly anticipated community meeting on the future of Chugiak-Eagle River schools produced heated debate but few real fireworks Monday at Mirror Lake Middle School as the debate continued between neighbors who support paying to repair earthquake-damaged Gruening Middle School and those who hope to combine the area’s two public high schools.

Despite the lack of consensus or compromise, Anchorage Assemblywoman Crystal Kennedy said she thought the 2.5-hour meeting served its purpose of giving area residents a chance to speak out on the issue in a respectful setting.

“I hope it was helpful from a community perspective,” said Kennedy, who hosted the meeting at Mirror Lake Middle School along with fellow District 2 state Rep. Fred Dyson.

Part debate, part community forum, the event in the Mirror Lake school gym attracted several hundred people and featured informational presentations from former Assembly members Anna MacKinnon and Debbie Ossiander as well as arguments from two teams of three people each — one side arguing in favor of combining Chugiak and Eagle River High Schools and the other speaking against.

MacKinnon and Ossiander reminded the crowd of the long fight to build Eagle River High School in the 1990s, when overcrowding at Chugiak High was one of the community’s most pressing issues.

“We told them that we wanted another high school,” MacKinnon said, noting that the community rejected plans to further increase Chugiak’s size in favor of two smaller high schools.

But while Anchorage School District projections at the time showed school enrollments continuing to increase, the district has actually decreased in size in recent years, with the Chugiak-Eagle River area’s total high school enrollment declining from around 2,200 students in 2005-06 (the year Eagle River High opened) to around 1,750 today.

“This is our community, it should be our choice,” said Slocombe.

Unification proponents argued that instead of paying nearly $40 million to fix Gruening Middle School, the district should instead walk away from the damaged school and turn Eagle River High into a middle school housing students in grades six to eight.

Daugherty said he’s not convinced Gruening can ever be repaired, and pointed to reports from the 1980s showing engineers had concerns about the school’s original design. He believes students and teachers who were inside the school when the Nov. 30, 2018, earthquake struck are lucky they escaped with their lives.

“We were very fortunate the building did not collapse on our kids,” he said.

Anchorage School District Chief Operating Officer Tom Roth took exception to Daugherty’s assertion that the school is beyond fixing. Roth said several professional engineers and architects have inspected the school and found that while Gruening did suffer major damage, its steel structure held up as it was designed to and the building can be repaired.

“I’m a dad,” Roth told the crowd. “Do you think I’d put people into a school that’s unsafe? Not a chance.”

The pro-unification group also said it’s not convinced the school district is being straight with its numbers. Chugiak’s current enrollment is around 900 students, while Eagle River has about 850. Bundy pointed out that the district claims Chugiak’s capacity is 1,642, but said ASD’s own High School Facility Utilization numbers show the school actually has a capacity of 1,895. And, she argued, with 71 regular full-time classrooms, Chugiak could hypothetically house as many as 2,130 students.

Following the pro-unification group’s presentation, Perry Lewis, Oscar Hall and Ty Witte spoke against combining the schools. The trio said Chugiak-Eagle River may not have grown much over the past decade, but combining high schools would still put Chugiak at or above its capacity. With several new neighborhoods already in the works, Witte said the area could find itself right back where it was in the 1990s.

“In 3 to 5 years there’s going to be the need for a second high school again,” he said.

A retired U.S. Army colonel, Hall said he has concerns about what would happen to the 42 percent of Eagle River High students who are connected to the military — some of whom would likely be sent to Bartlett High if the schools were combined.

He argued that the school has forged a unique identity on Yosemite Drive that shouldn’t be undone.

“Eagle River High School is not just a building made of bricks and steel, it is a community,” Hall said.

Lewis said the fact Chugiak and Eagle River are now the district’s two smallest public high schools isn’t necessarily a bad thing. A former Chugiak teacher, he said he remembers the days when 2,000 students roamed the halls at Chugiak and “I knew about half of them.”

At Eagle River, Lewis said, he’s familiar with nearly all of the school’s 850 students. That tight-knit community, he said, is a benefit to students because teachers and administrators are more responsive.

Kennedy said she called the meeting because she wants more direction on how to vote on an $82.8 million school bond package proposed by the Anchorage School Board that’s being considered by the Assembly for inclusion on the April municipal ballot. Following the meeting, Kennedy said she remains undecided on both the bond and whether high school unification is the right solution to her district’s education issues.

“There’s still a lot to be thinking about,” she said.

Dyson, however, said he’s more sure. The mechanical engineer said he’s convinced Gruening held up well in the quake and can be repaired, pointing to the school’s sound steel structure as proof.

“None of that moved,” he said.

“I had started out not wanting to combine them and I ended up more convinced after tonight,” he said.

“The district has already set their plans in motion for what they want. This meeting was just to pacify the public,” Huffer wrote in a post-meeting text message to the Eagle River Star. “They don’t make decisions after what they hear. They do what they want whenever they want and shove it down the throat of everyone regardless of opinions.”

The issue is still far from settled. If the Anchorage Assembly moves the bond package in its current form, the spending plan would then go before voters in April for final approval.

Panelists on both sides admitted the debate has created strong divisions within the community, but they also said they hope the community can disagree with each other without the issue creating long-term resentment.

“Let’s not allow our differences to divide us as neighbors, friends and colleagues,” Daugherty said.