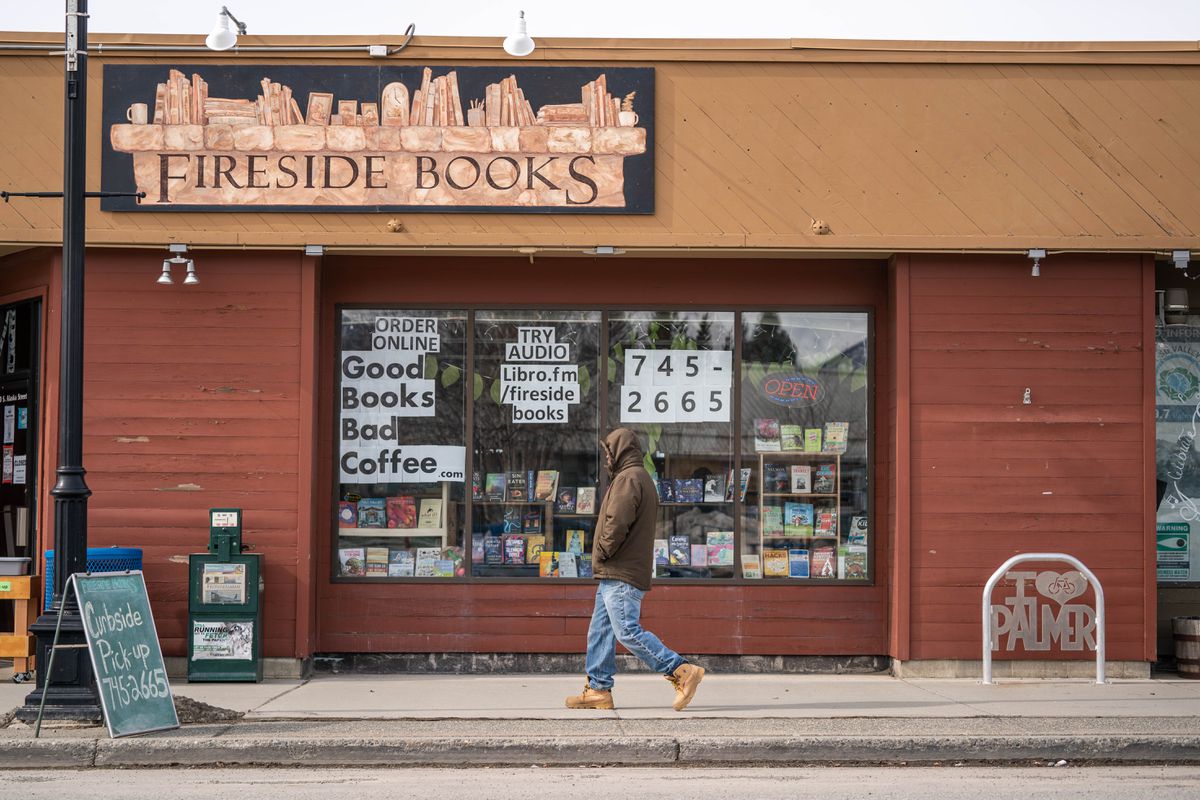 A person walks past Fireside Books in downtown Palmer on Wednesday, April 8, 2020. The store was receiving numerous orders for five books the Mat-Su school board voted off English reading lists this week. (Loren Holmes / ADN)

A person walks past Fireside Books in downtown Palmer on Wednesday, April 8, 2020. The store was receiving numerous orders for five books the Mat-Su school board voted off English reading lists this week. (Loren Holmes / ADN)

PALMER — The Matanuska-Susitna School Board has banned the teaching of five “controversial” books used for high school English courses.

The books, considered literary classics, are: “Invisible Man” by Ralph Ellison; “Catch-22” by Joseph Heller; “The Things They Carried” by Tim O’Brien; “I Know Why the Caged Bird Sings” by Maya Angelou; and “The Great Gatsby” by F. Scott Fitzgerald.

All five books are used by high school classes in the Anchorage School District, some as required reading.

The Mat-Su School Board voted 5-2 at a Wednesday meeting to remove the books from the list of materials for English elective courses. Most members participated remotely. There was no public comment.

Any teachers using the books are no longer allowed to do so, Mat-Su Borough School District spokeswoman Jillian Morrissey said. It wasn’t clear whether the vote meant library books would be removed.

“I haven’t heard that brought up at this point,” Morrissey said.

Bergey did not return a request for comment Thursday.

The books are considered controversial because of descriptions of rape and incest as well as sexual references, “things that are pretty serious problems, especially in our teenage world,” said Taylor, a Wasilla business owner.

“Is there a reason that we include books that we even label as controversial in our curriculum?" he asked. “I would prefer these were gone.”

Hart, a federal employee, said he read a summarized version of the two books he hadn’t read before — “I Know Why the Caged Bird Sings” and “Invisible Man” — and said Angelou’s work contained a graphic description of molestation that he’d be admonished for if he read it to the board.

“If I were to read this in a professional environment at my office, I would be dragged to the equal opportunity office,” he said.

Larson, a retired corrections official, said past controversies over other books made him question how closely parents follow reading lists.

“I can tell you the majority of parents will just sign off on the books and won’t read them anyway or won’t even know what’s in them,” he said.

But Trimmer, a business owner who lives near Palmer, said the conversation reminded him of something from the movie "Footloose” where “the old white man’s club” made the decisions.

He read some of the books during his school years “in the middle of the Bible Belt” in the 1980s and 1990s, Trimmer said. “To me, it’s a right that parents should have."

Welton, a psychologist who taught entry-level college courses for 14 years, said many of her students lacked critical thinking skills. She said it was up to parents to choose what their children wanted to read.

“I believe the controversial book subjects as reviewed by parents is ... it’s beneficial to our students,” Welton said. “I think we might be doing a disservice to not provide that.”

The decision was attracting hundreds of largely outraged comments on social media Thursday and calls to overturn the vote.

Former educator Pat Chesbro posted a message she sent to the board asking specifically what passages they found objectionable and who complained.

“One of the purposes in teaching books that have controversial content is so that teachers can guide students through the book to get to the underlying ideas,” Chesbro wrote. “From your reading of these books, what are the underlying ideas to which you object?”

[Related: The five books removed from Mat-Su English electives and why]

Fireside Books in Palmer was deluged with phone calls and feedback Thursday, as well as online orders for the five books, owner Mary Ann Cockle said.

David Cheezem, a former school board member who retired as bookstore owner, said the district previously had a balance between educational goals to prepare students for “the marketplace of ideas” with parents’ desire to protect their children.

“The School Board just burned it down,” Cheezem said in a message.

This particular decision followed a request from a board member for more information about English elective books that might be considered controversial, district officials say.

The district reviews course curricula on a regular basis. A group of administrators and teachers review course materials and forward their findings to the board for a decision.

The Anchorage School District also uses a group of administrators and teachers to review books, but the deputy superintendent makes the final decision rather than the school board, spokesman Alan Brown said.

All five books are used within the Anchorage district, primarily for juniors and seniors, Brown said. “I Know Why the Caged Bird Sings” is among the choices of required reading for sophomores. “The Great Gatsby” is on the required reading list for juniors.

Mat-Su got undue attention as a book banning hub during former Gov. Sarah Palin’s vice-presidential bid when erroneous rumors circulated that Palin got volumes removed from the Wasilla Library in the 1990s.

The next group of English electives to face Mat-Su district review includes The Bible as History and Literature, a course with more public pushback than any other, according to Amy Spargo, the district’s assistant superintendent of instruction.

“We had more concerns about that being taught in our curriculum than any of the books on this list,” Spargo said at the board meeting. “I just point that out here as evidence of what makes something controversial is really subjective. The books on this list were chosen for their literary value.”

The district allows students to opt out of a particular book if they or their parents find it offensive, officials say.

“The Great Gatsby,” “Invisible Man” and “Catch-22” are included on a long list of books challenged or banned by schools over the years, according to the American Library Association.

Students in American Literature read all five books. As of early April, there were 780 students throughout the district enrolled in that class at Burchell, Colony, Houston, Palmer and Wasilla high schools, according to information on the district website.

The board also voted to remove The New York Times’ The Learning Network as a “mentor text” and creative writing teaching resource. The newspaper is still part of the school district’s journalism curriculum.