Many families have chosen home school during the pandemic. In Alaska, the rate is especially high. 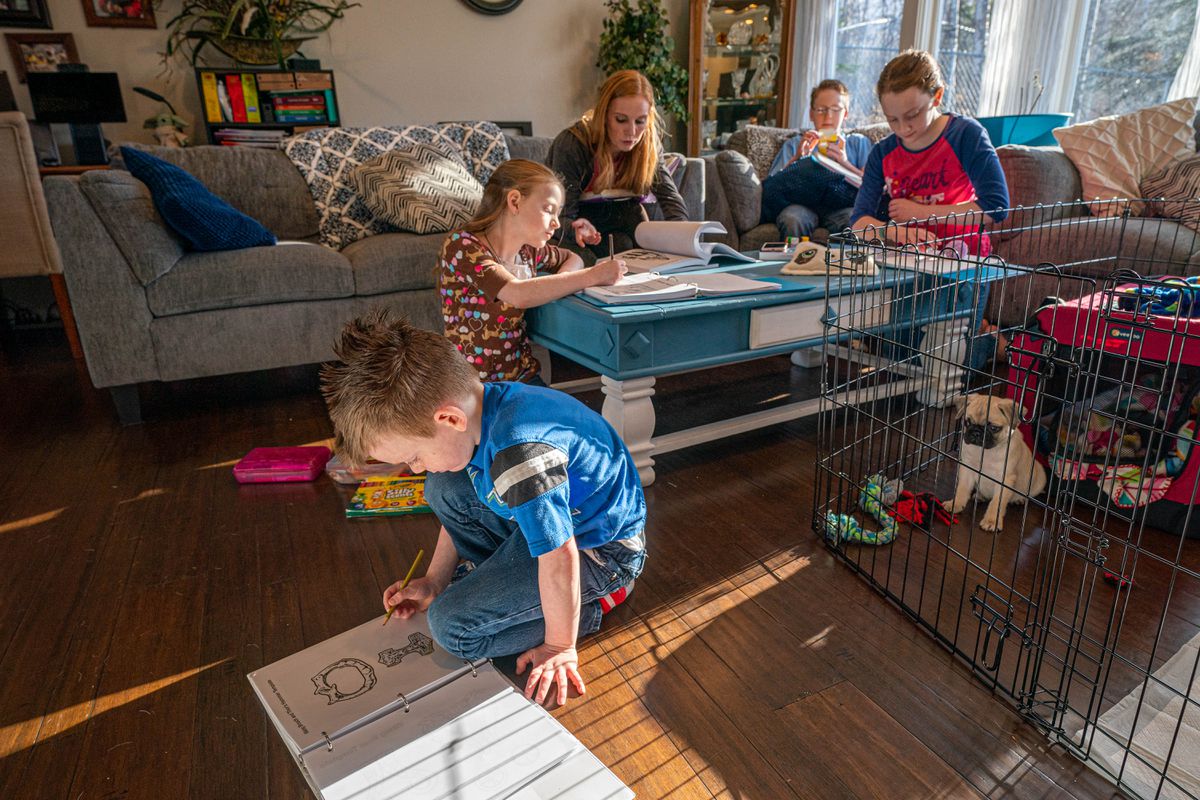 Sharice Bradley of Eagle River began home-schooling her four children last fall with the help of a pod — a small group of students from different families learning together from home. It was a means of making do during the pandemic.

The Bradleys had moved to Alaska in August. Her children — ranging in age from 5 to 12 years old — were part of the pod in Eagle River until COVID-19 cases spiked in late 2020. Then, Bradley chose to continue teaching at home, through Family Partnership Charter School.

Sometimes, she and her children gather in the living room, working on history lessons. Other times, the kids scatter around the house, one child doing schoolwork on the floor, another at the dining table.

“Every day is a little bit different,” Bradley said.

She said her children are excelling, and she plans to keep them in home school, even though brick and mortar schools have reopened.

The Bradleys are among the many Alaska families choosing to home-school their kids during the pandemic. From April 2020 to September 2020, the U.S. Census Bureau reported that nationwide, households that opted to home-school their children doubled. In Alaska, numbers shot up even more, from 9.6% to 27.5%.

Alaska saw the biggest difference in home-schooling rates compared to any other state from April to September: 17.9%. The state also has the largest percentage of students home-schooling.

Out of about 41,600 total students in the Anchorage School District, over 14% of the student population — over 6,100 students — is either enrolled in ASD Virtual or ASD Homeschool, according to April numbers.

District deputy superintendent Mark Stock said in an email that current enrollment numbers for ASD Virtual and Homeschool programs have “gone down a bit but remain solid.”

Ultimately, online learning is “here to stay,” and the district “need(s) to work within it,” he said.

“This pandemic has been an outside force that has made ASD really look at the concept of parental choice and student options,” Stock said.

In other Alaska boroughs, home-schooling numbers are higher. In the Kenai Peninsula Borough School District, more than 29% of students are finishing the year either through the Connections Homeschool Program or fully online, according to a count done on March 25.

In the Matanuska-Susitna Borough School District, 28% of students are finishing remotely or via home schooling, according to a count done on March 30.

Stock said the Anchorage School District has learned that families are looking for “some level of flexibility” when deciding whether to keep their child at home or have them return to the classroom.

With that in mind, Stock said the district is able to build customizable programs for students who need them, although it’s hard to predict how many students will be returning to classrooms.

“We’ve built our budget on the assumption that 75% of families who chose an option outside of ASD will return,” Stock said.

Officials at Denali PEAK — a statewide home-school program operated by the Denali Borough School District — said they recently saw an influx of students from the Mat-Su and Anchorage.

Dan Polta, superintendent for the Denali Borough School District, said in his view, Alaska as a state is especially supportive of parents who choose that path.

[The Anchorage School Board has passed anti-racism and instructional equity policies. What happens next?]

“I remember when I was a support teacher in a home-school program and talking to families who transition to other states and trying to see what options they have in that new state for home schooling, and I never found anything that compared to the type of support that you get from Alaska’s home-school programs,” Polta said.

Bradley, the mother of four in Eagle River and a stay-at-home mom, said parents may feel inadequate teaching their children, but she strongly believes any parent can, as long as they have a desire to teach, learn and hold a high school diploma.

“Two of the moms we did our co-op with, they’re putting their kids back in public school next year, which is totally fine ... but for them, they were like, ‘I need to put my kids in school,’” Bradley said.

“There is no mom user manual, and it’s the same way with school,” Bradley added. “You know your kids, you’ve been with them enough and you are capable — you are more capable than you think — the same thing goes with home school.”

She works with a sponsor teacher, who helps her create a plan for each child.

“I go through each one of my kids and I make a plan for the year,” Bradley said. “I said, ‘This is the curriculum that we’re using. This is where they should be at this point.’ "

Bradley also gets financial support from the Anchorage School District, otherwise known as allotments — money from the state of Alaska for each student enrolled in the program. For the 2020-2021 school year, Family Partnership Charter School provided a $3,600 annual allotment for kindergarteners through fifth graders, and $3,800 for sixth, seventh and eighth graders. High school families receive $4,000.

Charter schools in the district receive different amounts of funding, and each school has different rules on what money can and can’t be spent on.

Bradley said this year, she purchased books for her classroom setting with some of her allotment. For physical education, they took ice skating lessons.

A financial challenge for ASD

But thousands of students completing the school year from home have led to a financial challenge for Alaska’s largest school district.

There were approximately 3,500 other students who transferred outside of the district, reducing state and local funding by approximately $13 million.

That’s a separate financial impact to ASD than the 1,400 students who moved around within the district, Anderson said, and an overall change in enrollment he called an “anomaly.”

“When you’re looking at (1,400) additional kids (going) to a home-school program that you didn’t budget for and at the same time, 3,500 students left the district — which is a significant reduction in overall revenue — it just kind of compounded it,” Anderson said.

In December, the district initially projected a $28 million budget shortfall for the upcoming fiscal year — partially due to the number of students who left ASD — but was able to close the gap using both budget reductions and funds from the December COVID-19 federal relief package, the school district said in its most recent budget proposal.

It’s still unknown how many students are going to return to in-person class at Anchorage’s schools.

For Casey Hall in Eagle River, she began home-schooling last year with a pod but plans to continue keeping her child home next year. One of the parents is a former teacher, she said.

She said the flexibility works for her family.

“It lets us go the pace of the kids,” Hall said. “If they take a break to go snowboarding for the day, it’s not a huge deal. They’ll just do math lessons the next day.”

One of Hall’s biggest home-schooling concerns was whether her daughter would socialize enough with other children. But Hall said the fact that the pod has four other kids from two families allayed those concerns.

She also stays busy with dance, gymnastics and Girl Scouts, which she does with another child in the pod, Danica.

Danica’s mom, Kimberly Tooman, said she never thought she would home-school her daughter. But when Tooman saw her second grader struggle through virtual learning after the Anchorage School District shut down in-person classes, she decided to make a change.

Danica would get distracted easily in virtual learning, but that hasn’t been an issue in home-schooling. Tooman said Danica has learned more than she would have in ASD’s virtual program, especially in math.

“She didn’t mind the Zoom sessions she had with other kids, because at least she got to see their faces,” Tooman said. “But when the only thing was, ‘I want you to do these computer programs,’ that got old really quickly.”

Tooman hosts the pod on Mondays. For the next three days, they go to the former teacher’s house to learn reading, spelling and science. Hall gets the pod on Fridays — which are typically reserved for catch-up days and field trips.

The pod has been to the Alaska Wing Civil Air Patrol to learn about aviation, picked vegetables at Pyrah’s Pioneer Peak Farm in Palmer and has taken a tour of the Independence Mine State Historical Park at Hatcher Pass.

Tooman also worried her daughter wasn’t getting enough exercise in ASD’s virtual program, but she said home schooling has allowed her to be involved in extracurricular activities like ice skating, swimming and skiing. The pod also has a 30-minute recess after lunch, which oftentimes consists of building snow forts or sledding in the yard.

“A pod was, I think, much more helpful than doing it by myself,” Tooman said. “(Danica) loved it, and it was great to have the support of the other parents.”

For Hall, her decision to keep her child at home was related to how coronavirus had affected public schools and things she heard from other parents.

“I just didn’t think that they were getting a quality education back in public school right now,” Hall said. “So, we decided to stay with home school.”