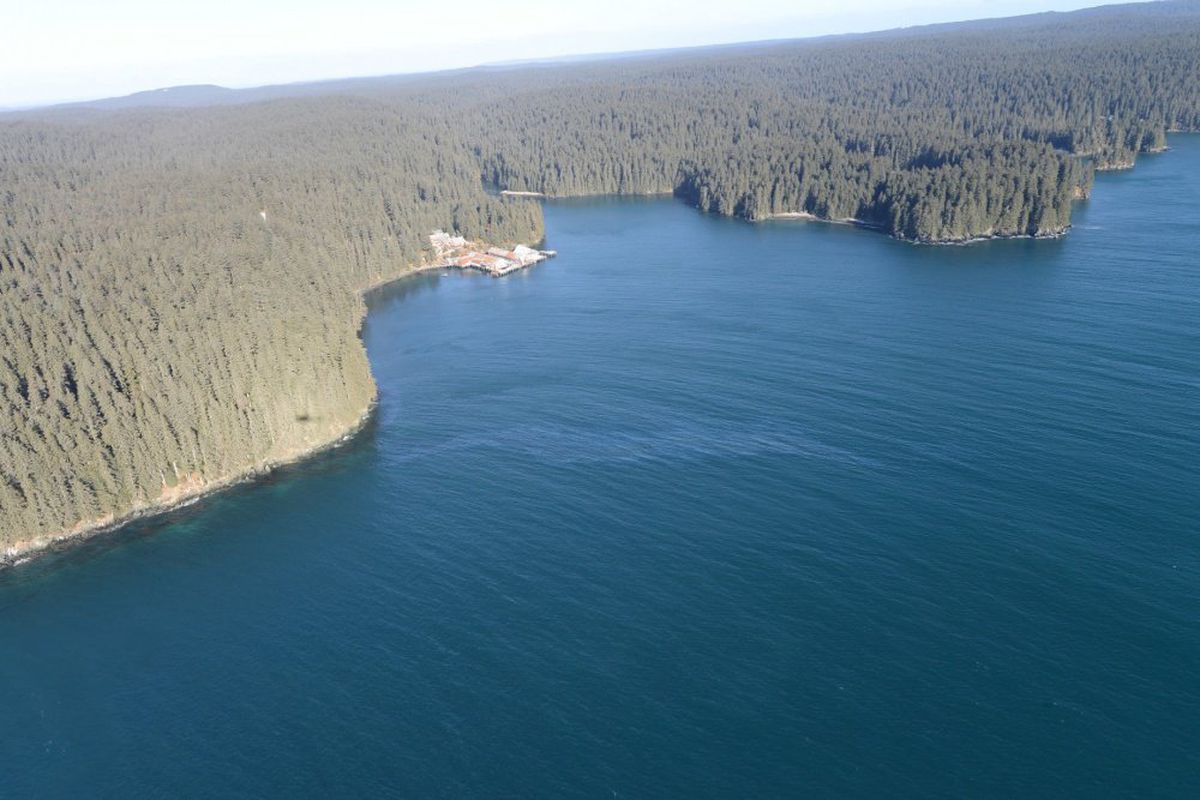 Coast Guard and Alaska Department of Environmental Conservation personnel flew over the area of an oil spill in Shuyak Strait, 49 miles north of Kodiak, but assessment efforts have been hampered by inclement weather. (U.S. Coast Guard photo)

Coast Guard and Alaska Department of Environmental Conservation personnel flew over the area of an oil spill in Shuyak Strait, 49 miles north of Kodiak, but assessment efforts have been hampered by inclement weather. (U.S. Coast Guard photo)

A Coast Guard MH-60 Jayhawk helicopter crew from Air Station Kodiak flew over the area of an oil spill in Shuyak Strait on Wednesday afternoon, but weather continued to hamper response efforts, the Coast Guard said.

Once 45- to 60-knot winds and 8- to 12-foot seas subside, federal and state entities hope to start containment and oil recovery in the remote area about 50 miles north of Kodiak.

A contractor has two vessels loaded with boom, a skimmer and other gear to conduct a cleanup. The company, Alaska Chadux Corp., also has two other vessels ready to deploy, the Coast Guard said late Wednesday.

Bad weather Wednesday was preventing oil spill responders from reaching a remote channel north of Kodiak where up to 3,000 gallons of heavy fuel spilled Monday.

Hurricane-force winds caused a private dock to collapse Monday morning. Oil stored there was dumped into the waters of Shuyak Strait, between Afognak Island and Shuyak Island about 50 miles north of Kodiak.

As of Wednesday morning, however, 45 to 60 mph winds and 5- to 8-foot seas kept any pollution responders in boats from getting to the spill.

The Coast Guard flew over the area Tuesday, and responders got a look at the spill from the air. A Coast Guard helicopter crew from Kodiak was planning another spill overflight Wednesday afternoon, weather permitting.

About 3,000 gallons of the oil, thick and viscous Bunker C or heavy fuel oil, was contained in a rubber tank.

It's not clear how much oil has spilled into the water, officials say. They're planning for the worst-case scenario until they know more.

The oil doesn't spread like gasoline or diesel but instead floats like a net, rather than a slick.

"A 3,000-gallon heavy oil spill in a remote area is a pretty big deal," said Geoff Merrell, on-scene coordinator for the Alaska Department of Environmental Conservation.

Four vessels and nearly 30 people were holding in Kodiak and Anchorage as spill coordinators waited for the weather to clear, Merrell said. The plan is for a long-term response due to the remote location, weather and type of oil.

"This is not the sort of thing we're going to be able to have resolved in a couple of days," he said.

Early in a spill, skimmers and vacuum pumps can be "very effective" in the recovery of heavy fuel oil, according to a National Oceanic and Atmospheric Administration fact sheet. But the oil "can be carried hundreds of miles in the form of scattered tarballs by winds and currents. The tarballs will vary in diameter from several yards to a few inches and may be very difficult to detect visually or with remote sensing techniques."

The strait is a popular fishing area. Much of Shuyak Island is a state park.

Federal biologists are establishing a list of the animals in the area and trying to calculate how much oil they could get exposed to before prioritizing a response, said NOAA spokeswoman Julie Speegle. "It's going to depend on what we find."

The intense weather in the spill area was supposed to ease starting Thursday morning.

The private facility where the spill occurred was once used as a steamship depot, floatplane base and cannery.

Merrell said he didn't know the name of the oil's owner but said it appears there may be numerous interests. He said DEC doesn't regulate the storage of that type of oil in that amount.