A man named Pirate left a history of violent rape charges in his wake, but made it back to Fairbanks anyway 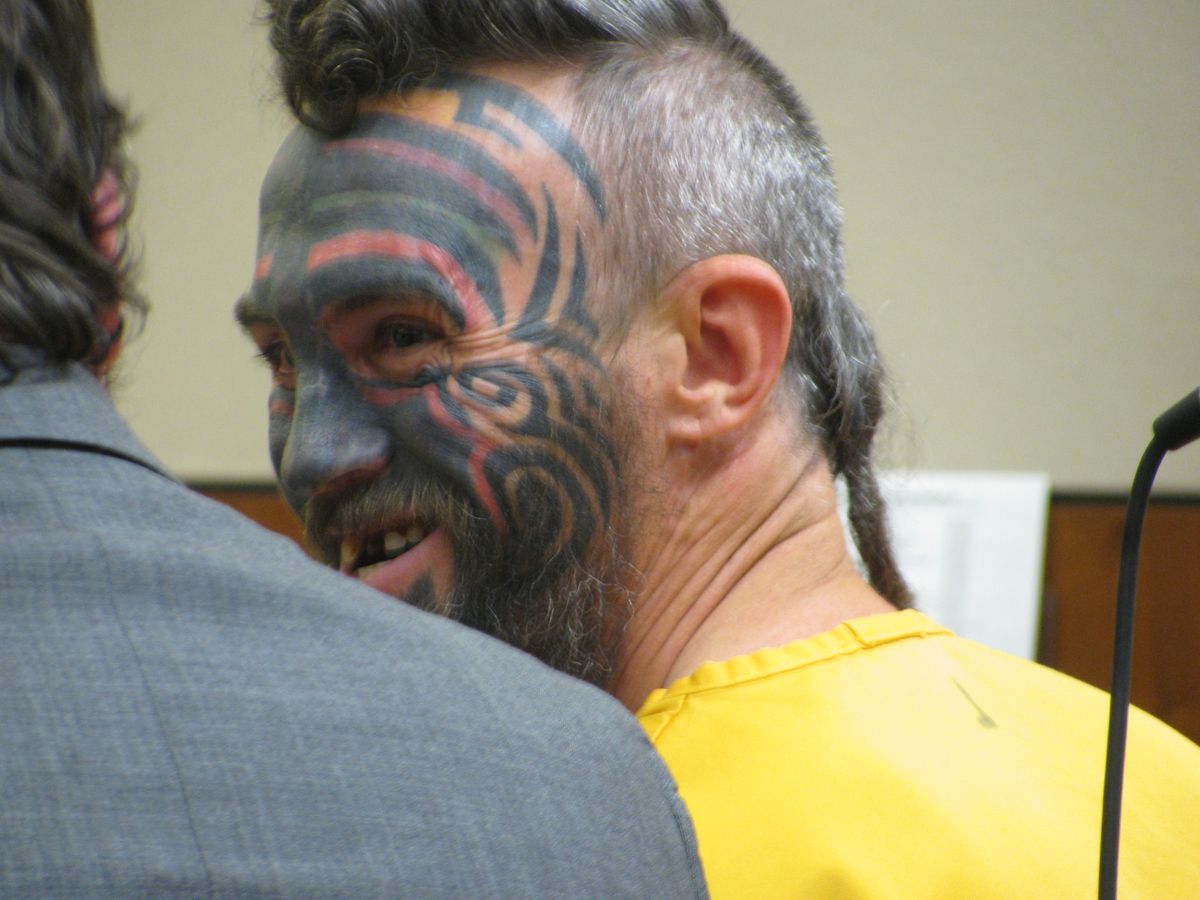 In this Nov. 24, 2015 photo, Daniel Lloyd Selovich, 37, is arraigned in Fairbanks Superior Court. Selovich was accused of physically and sexually abusing a woman while holding her captive in a remote cabin for five weeks. (AP Photo/Fairbanks Daily News-Miner, Dorothy Chomicz)

In this Nov. 24, 2015 photo, Daniel Lloyd Selovich, 37, is arraigned in Fairbanks Superior Court. Selovich was accused of physically and sexually abusing a woman while holding her captive in a remote cabin for five weeks. (AP Photo/Fairbanks Daily News-Miner, Dorothy Chomicz)

Word got around fast that Pirate was back in Fairbanks.

The man formerly known as Daniel Selovich was well known in the Interior Alaska city due to a horrifying 2015 criminal case in which he was accused of holding a woman captive at a remote cabin for five weeks of sexual assaults and beatings.

The woman had been rescued by a helicopter and Selovich, who had legally changed his name to “Pirate,” was charged with rape and kidnapping. Photos of Selovich in court showed his distinctive full-face tattoo.

Then the woman died of a drug overdose and the charges against Selovich were dismissed.

The Fairbanks district attorney explained to a reporter at the time that the case against Selovich rested on the woman’s testimony about what happened inside the cabin 16 miles south of Manley Hot Springs.

When it looked like Selovich, 41, might walk free, he was extradited to Las Vegas, Nevada — where he had been connected to a more-than-decade-old unsolved rape by DNA.

Fairbanks thought it had seen the last of Pirate.

Until this week, when Pirate, now going by the nom de internet Raven Bushmaster, started popping up on local dating websites — apparently out of prison, back in Alaska, ready for another try at living in the wilderness and seemingly recruiting women to join him.

People in Fairbanks were not happy. How had a man with a history of violent sexual attacks been released from prison so soon? What was he trying to do back in Fairbanks?

Mo Duncan, a Fairbanks resident with a cabin in the Manley Hot Springs area, remembered Selovich from when he had showed up in the area, selling trash he found at the dump on Facebook. She’d heard he’d been seen at McDonald’s. She was in the area, so she pulled in to have a look.

“And I’ll be damned, there he was,” Duncan said.

She told him he wasn’t welcome in Manley Hot Springs anymore. She took his photo and called him a “serial rapist” in front of the other restaurant patrons.

“I was a little out of line,” she said. “I understand that. But I also believe we need to confront these people and let them know we see them.”

Jody Potts, a Fairbanks mother of three who had a 10-year career in law enforcement and is an activist and board member for the Native Movement organization, made a post about Selovich’s reappearance on Facebook, warning people to stay away — but also not to seek vigilante justice.

The post was shared hundreds of times. More than a few commenters made graphic threats of violence against Selovich.

“People want to chase him out of town,” Potts said. “But really he’s a problem to society wherever he goes.”

Potts said she worried about him going somewhere without law enforcement. He’d posted about finding a place on the Yukon River.

Attempts to reach Daniel Selovich for this story were unsuccessful. A woman who answered the phone at the home of the couple who public records suggest are his parents in Missouri hung up.

Two of the cases involved DNA evidence that took years to come to light and then resulted in relatively modest prison sentences. The third, from Alaska, was dismissed.

Two of the three victims in the cases died of unrelated causes while the case was still pending.

Public records suggest that Selovich has roots in Missouri but has lived his adult life as a drifter.

The first of the three criminally charged rapes happened in Las Vegas on Feb. 5, 2004, according to charging documents in the case.

Selovich broke into a room at a motel and raped a disabled woman. The woman had spina bifida and used a wheelchair to get around, as well as brain trauma.

On Dec. 14 that year, a woman was raped by a stranger who approached her under a bridge in Redding, California, according to news accounts from the Redding Record Searchlight newspaper from the time.

Meanwhile, Selovich was drifting around the United States, charged with petty crimes from Florida to Washington.

In 2007, he was arrested in Florida. DNA taken matched the 2004 California rape. But he was not arrested, the Record Searchlight reported. The next year he was questioned by police in Redding after he passed through, but escaped arrest.

In 2010, Selovich was finally arrested in New Mexico for the Redding rape case.

It wasn’t clear why police waited for years before acting on the DNA evidence. He pleaded no contest and was sentenced to four years in prison.

In 2013, Selovich legally changed his name to Pirate — just Pirate. It was around this time he got the face-covering tattoos.

Out of prison, he began posting on permaculture and other Facebook groups exploring off-grid living. He formed one group, Remote Living, that attracted a few hundred followers, some of whom posted multiple times each day.

He solicited donations on the Remote Living group to fly a woman named Kristi Buchanan up to join him.

She arrived in Fairbanks in September and the two were flown by charter plane to his remote property south of Manley Hot Springs, according to accounts from charging documents.

The charges described harrowing torture and assault: During the next five weeks, Buchanan was sexually assaulted daily, beaten, kicked, bitten, cut with a knife and duct-taped to Selovich at night, according to prosecutors. Authorities said Selovich used a rope to tether her neck to a ceiling rafter, keeping her captive during the day. He threatened to “cut her face off,” according to the charges.

Buchanan was eventually able to call for help and was rescued by helicopter on Nov. 8, 2015.

Selovich was arrested and charged with rape and kidnapping.

While in jail, a few members of the Remote Living online community wrote letters with Selovich or retyped his handwritten letters for the online group, some of which includes complaints that Buchanan had “set him up.”

Buchanan wasn’t from Alaska, but had agreed to stay in the state and cooperate with prosecutors until the trial was over, former Fairbanks district attorney Gregg Olson said at the time.

Then she died in July 2016 from what the Fairbanks Daily News-Miner has reported was a drug overdose. The charges, which the district attorney said rested on her testimony about what had happened inside the remote cabin, were dismissed.

But Selovich’s DNA, taken during the investigation into the Manley Hot Springs case, linked him to an unsolved rape in Nevada: the 2004 attack on the disabled woman in a Las Vegas motel room.

Selovich was extradited to Nevada in October 2016. He remained jailed there while attorneys worked on his case. In May of this year, he agreed to a plea agreement for a single count of “sexually motivated coercion.”

A few days later, the victim in the Las Vegas case was hit by a car in California and died, Las Vegas prosecutor Jake Villani told the Las Vegas Review-Journal at the time.

It’s not clear whether the woman’s death affected how the case was resolved. A plea agreement had already been reached, Villani told the newspaper.

Selovich was sentenced to four years in prison on July 17, 2018. He’d already served 645 days at that point, court records from Nevada show.

By October of this year, he was out and making plans to get back to Fairbanks.

Using a new online name, Raven Bushmaster, he began posting about his plans to build a shelter and find another spot to live off-grid in Alaska.

In his last post Tuesday before the public uproar over his reappearance went viral, he had arrived in Fairbanks. He wrote about hiking through the snow to check on an old squat and build a fire.

The next day, Selovich hinted that he might not be long for Alaska.

“No fire last night, running into alot of drama with locals might head back to Cali,” he wrote.